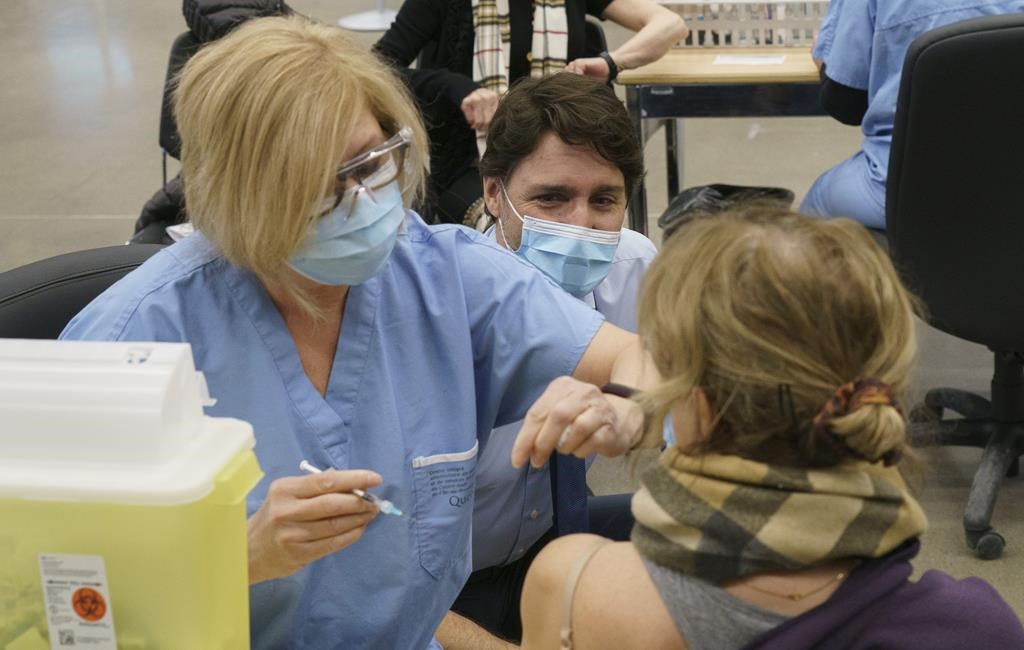 Prime Minister Justin Trudeau watches a woman receive her COVID-19 vaccine, during a tour of a vaccination clinic in Montreal on Monday, March 15, 2021. Photo by The Canadian Press/Paul Chiasson
Previous story
Next story

Prime Minister Justin Trudeau offered reassurances on the safety of the Oxford-AstraZeneca COVID-19 vaccine on Monday as the list of European countries suspending its use due to safety concerns grew.

Germany, France, Italy and Spain on Monday joined other countries in Europe that have paused their use of the AstraZeneca vaccine over reports of blood clots in some recipients, even though European regulators say there's no evidence the shot is to blame.

Health Canada regulators are constantly analyzing all the available information about vaccines and have guaranteed those approved in Canada are safe for use, Trudeau told reporters in Montreal.

"Health Canada and our experts and scientists have spent an awful lot of time making sure every vaccine approved in Canada is both safe and effective," he said. "Therefore, the very best vaccine for you to take is the first one that is offered to you."

The prime minister told reporters none of the AstraZeneca doses Canada has received are from the batch linked to possible side-effects reported in Europe.

In a statement, Canada's chief public health officer reiterated that the benefits of the vaccine outweigh any risk.

"The government of Canada continues to work with international regulators, including the European Medicines Agency, to determine whether there is any need to take action in Canada," Dr. Theresa Tam said in a statement.

The European countries' decision to suspend AstraZeneca's vaccine comes as Canada's national vaccine expert panel is expected to update its recommendations on whether use of the vaccine should be expanded.

Canada's National Advisory Committee on Immunization initially recommended that people 65 and over be prioritized for the mRNA vaccines from Pfizer-BioNTech and Moderna because more evidence from trials was available regarding their efficacy on seniors, compared with AstraZeneca's vaccine.

The chair of the committee, Dr. Caroline Quach, told The Canadian Press last week it was analyzing newer evidence about how the AstraZeneca vaccine worked for seniors in "real-world" use and said an updated statement could be expected soon.

AstraZeneca said over the weekend a review of 17 million patients who received the shot in Europe and the U.K. indicates no elevated risk of blood clotting.

Infectious disease specialist Dr. Sumon Chakrabarti said he was worried the mixed messaging on AstraZeneca had "poisoned the well" of public opinion.

In an interview from Mississauga, Ont., Monday, he said the rate of blood clots in people who received AstraZeneca was no different than the rate in the general population. He said he is worried "this excellent tool" that will help societies fight the novel coronavirus is being disparaged.

"And this now is taking a perfectly good tool and essentially just throwing it away, or at least casting it in a light that it doesn't deserve," he said.

Trudeau was in Montreal to tour a mass vaccination centre and make an economic announcement alongside Legault. He said he was happy to see seniors getting their shots, noting that his mother, Margaret, received her vaccine last week.

He said he wasn't sure when he would get his own COVID-19 vaccine but would happily take it when his turn comes.

Several provinces were expanding their vaccine rollouts on Monday, including Ontario, which launched its COVID-19 vaccine booking system for those aged 80 and up.

The online booking system went live at 8 a.m. and the government said more than 63,000 people had booked vaccine appointments by early afternoon.

Speaking Monday afternoon, Premier Doug Ford promised to resolve error messages and other issues that were reported Monday in the early hours. "If there's bumps in the road, or wrinkles in the system, I assure you we will have this taken care of immediately," he said.

In Quebec, the province's booking site expanded its list of potential vaccination sites to include some 350 pharmacies in the Montreal area, which are expected to begin giving COVID-19 vaccines next week. The province is vaccinating people 65 and up in Montreal and 70 and up elsewhere in the province.

Alberta, meanwhile, announced a large-scale COVID-19 vaccination site is to open at a convention centre in downtown Calgary next month. The province also lowered the age of eligibility for vaccines to all Albertans born in 1947 and Indigenous people born in 1962.

Alberta is also offering the AstraZeneca vaccine to some groups of people under 65 but said Sunday that only a few thousand doses remained, although more deliveries are coming.

B.C., meanwhile, announced it would offer its first doses of the vaccine to priority and front line workers, including poultry, fish and fruit processing plants, agricultural operations and large industrial camps.

— With files from Cassandra Szklarski and Shawn Jeffords.