Hawaii's sea-walls, built to ease the impacts of climate change, are doing more harm than good 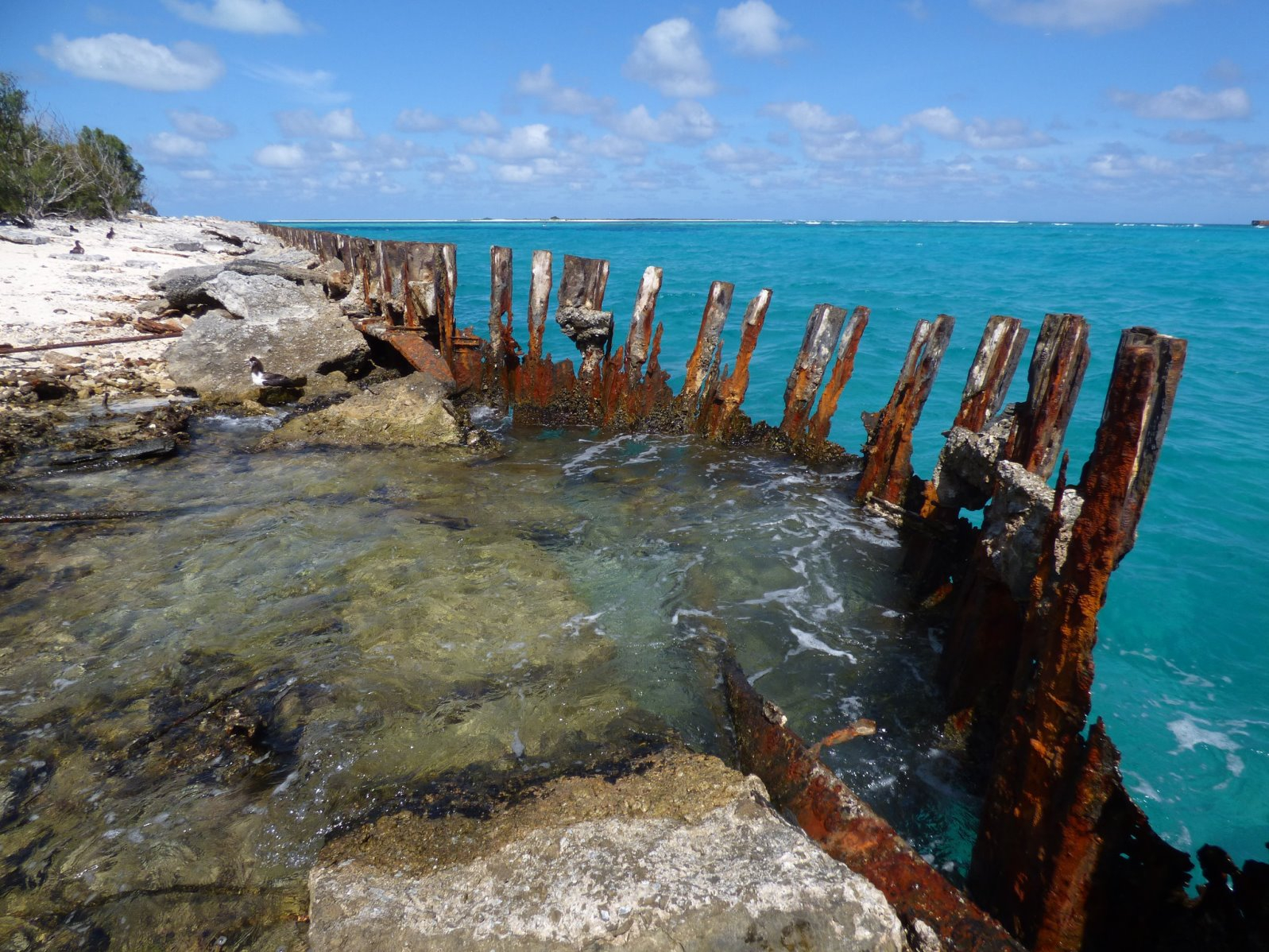 A sea-wall deteriorating breached by the ocean at the southeast end of Sand Island, Midway Atoll, Hawaii. Photo by Forest and Kim Starr / Flickr (CC BY 2.0)
Previous story
Next story

Pu'uloa, a coral-lined stretch of sand along the southern curve of O'ahu, is a sacred place. To the native people of Hawaii, it is home to an ancestral shark goddess, the spot where humans first stepped foot on the island. To mainlanders, parts of it are known as Pearl Harbor, home to the only site of foreign attack on American soil in the last century. But while the various stakeholders agree on the beach’s cultural importance, they have very different opinions about a proposed method of protecting it — namely, a 1,500-foot sea-wall designed to push against the rising tides of climate change.

The plan, put forward by the U.S. Marine Corps in 2019, would involve driving interlocking sheets of metal 20 feet into the underlying bedrock along the Pu‘uloa Range Training Facility. The wall would theoretically provide a protective barrier against the ocean’s encroaching waters. Beach erosion coupled with rising sea levels and heavier rains has intensified flooding in the state. Just last week, Hawaii Gov. David Ige declared a state emergency after heavy flooding on O’ahu forced thousands of people to evacuate their homes.

But some residents and lawmakers say the Pu‘uloa sea-wall will just speed up erosion at Pu‘uloa’s Ewa Beach. When a wave hits a sea-wall, its energy can be reflected along the shore, resulting in beach sand loss and damage to nearby natural structures like coral.

On Thursday, Gabbard introduced a resolution to the state Senate in opposition to the planned sea-wall, calling on the U.S. Marine Corps to first complete an Environmental Impact Study. The resolution claimed the local neighborhood board was not formally notified of the project until after the end of the military’s comment period, depriving many residents of the chance to express concerns about the project’s impact on local beaches. In response, the U.S. Marine Corps told Grist they “remain committed to absolute transparency in the shoreline stabilization process.”

Under the National Environmental Policy Act, or NEPA, environmental impact statements are necessary for actions “significantly affecting the quality of the human environment.” But the Marine Corps argued that this requirement does not apply to the Pu‘uloa sea-wall since the proposed project would be built on federal land used by the military.

Gabbard, however, disagrees with this logic. “Whether it’s on federal land or not, people and families live close to the facility,” he said. “While we appreciate the military and what they contribute to the economy, the fact is they need to reach out to the community if they’re going to be a part of the community.”

Hawaii’s relationship with the U.S. military is deep and complicated. Over the last 80 years, the southern coast of O‘ahu has transformed into one of America’s largest bases, used by the U.S. Air Force, Navy, and Marine Corps. The military is one of the biggest economic drivers of the island’s economy. But its environmental legacy is more troubling. After the 1941 attack on Pearl Harbor, the islands were put under martial law for almost three years; near the end of World War II, the U.S. military disposed of tens of thousands of chemical weapons — around 4,220 tons of “unspecified toxics” and hydrogen cyanide, and 16,000 mustard bombs — by dumping them in the waters off O‘ahu.

“With #ClimateChange and sea-level rise impacts, we just need to get away from hardening our shorelines or we’re gonna end up without any beaches,” says Hawaii state Sen. Mike Gabbard. “And what’s #Hawaii without any #beaches?” #seawalls

Environmental concerns associated with the military persist in modern-day Hawaii. Today, the Islands have 115 military installations with at least one environmentally hazardous site. In 2019, the military dumped 540,000 pounds of nitrate compounds into the ocean off the joint Air Force and Navy base located just a few miles from the Pu‘uloa training facility.

The water in the community surrounding Pearl Harbor is contaminated with more waste than 99 per cent of the country, according to the Environmental Protection Agency That has many advocates raising environmental justice concerns, especially as the state has the 13th highest poverty rate in the country, with the largest share of the burden falling on Native Hawaiians. Hawaiian activist Dennis “Bumpy” Kanahele even went so far as to describe America’s heavy military presence on his home island as “genocide in paradise.”

But it’s not just the Pu‘uloa sea-wall’s association with the military that has nearby residents concerned with the project. Over the last 100 years, Hawaii’s three major islands have lost roughly 25 per cent of their beaches to erosion, exacerbated by similar sea-walls. Though all of Hawaii’s beaches are technically owned by the public and residents are not supposed to construct any new sea-walls, government officials have granted more than 230 environmental exemptions to wealthy private landowners, according to records compiled by the Honolulu Star-Advertiser and ProPublica.

Representatives from the O‘ahu chapter of the Surfrider Foundation, an environmental organization that works to protect oceans and beaches, have been pushing back against the use of sea-walls for years. Like Gabbard, they are calling on the U.S. Marine Corps to conduct an environmental impact study.

“We have natural sandy beaches that have existed for hundreds of thousands of years,” said Doorae Shin, the O‘ahu chapter coordinator. “These are public trust resources and private property or military property doesn’t supersede the public’s right to that to that resource.”

The chapter also suggests that the Marine Corps move their training range’s firing line back from the shore to protect both the facility and the beach from future harm. The group says that unregulated target practices on the range lead to lead bullets finding their way into the ocean. (The plan is allegedly under consideration).

Even if the resolutions fail and the military is technically able to proceed without providing an environmental impact statement, the Surfriders hope activists’ efforts will convince the Marine Corps to take additional steps to minimize harm.

“The burden of proof is on them, it’s their land, it’s their — in Hawaii we say ‘kuleana’ — it’s their responsibility to take care of that land to protect our people,” Shin told Grist.