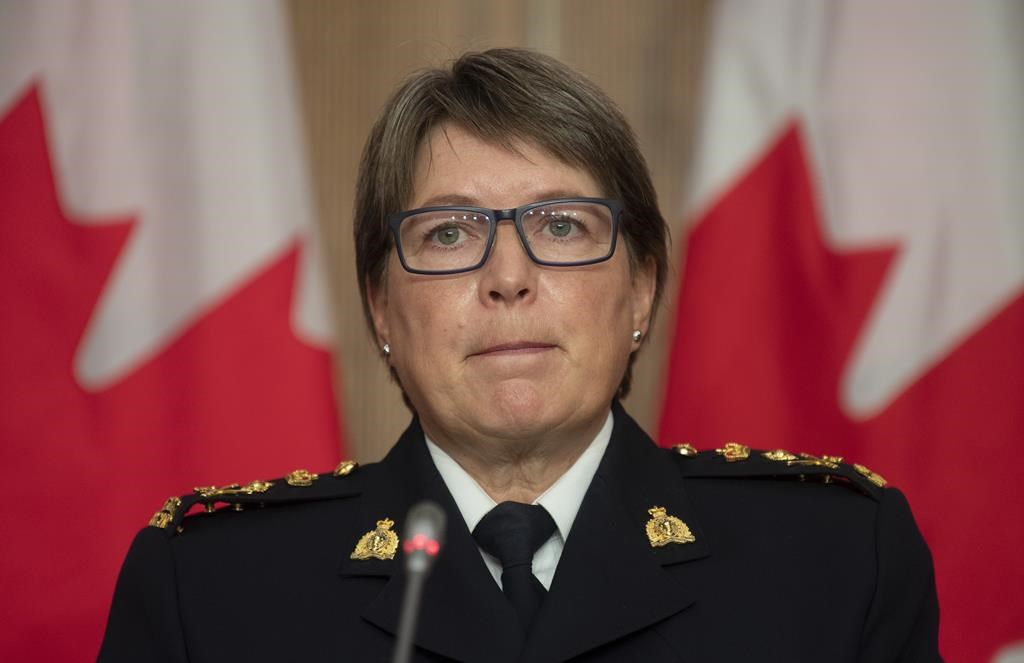 OTTAWA — The Mounties have enforced racist and discriminatory legislation and policies, with some incidents leaving generational scars, and they should do better in the future, RCMP Commissioner Brenda Lucki said Wednesday.

"As an institution of the government we acknowledge that the RCMP is obviously part of social structures and systems that have perpetuated racism in Canada," Lucki told a virtual forum on First Nations policing hosted by the Assembly of First Nations.

"I am completely committed to reconciliation, both as an individual and as the commissioner of the RCMP."

The national police force is at the beginning of a very long journey to regain the confidence of First Nations, she said, noting that developing a respectful relationship is going to take time.

"Building trust is a shared journey but it's also bigger than words," she said. "We have to show actions. Then we have to work hard together to build and maintain relationships based on trust."

Last October, AFN National Chief Perry Bellegarde said he had "lost confidence" in Lucki after months of unrest and urged Prime Minister Justin Trudeau to replace her. This came as the RCMP faced heavy criticism for its response to violence toward a disputed Mi'kmaq moderate livelihood lobster fishery in Nova Scotia.

Lucki had already faced calls for her resignation earlier last year, when she said in an interview that she believed there is "unconscious bias" in the RCMP but she was "struggling with the definition of systemic racism." She later reversed herself in a written statement that said systemic racism does exist, though she had trouble citing examples.

Those remarks came at a time when there was an outcry over violence against Indigenous people in encounters with police, alongside a renewed focus on racism following the death of George Floyd, a Black man, at the hands of police in Minneapolis.

On Wednesday, Bellegarde said there is a need to work with the RCMP to ensure policing is beneficial for Indigenous people.

He said the RCMP should adopt a zero-tolerance policy for excessive use of force by members, as well as put in place better recruitment processes and proper training on de-escalating confrontations.

The Mounties have enforced racist and discriminatory legislation and policies, with some incidents leaving generational scars, and they should do better in the future, RCMP Commissioner Brenda Lucki said Wednesday.

Bellegarde also called on the federal government to strengthen civilian oversight for the RCMP and provide the necessary human and financial resources to deal with complaints about the Mounties. He also said there should be "incentives to keep experienced people in the communities rather than the inexperienced young rookies coming in."

Bellegarde noted the marching orders contained in the mandate letter that Public Safety Minister Bill Blair received from Trudeau on tackling systemic inequities involving the RCMP and the communities it serves. These also include unconscious-bias training, body-worn cameras and a move to community-led policing.

"RCMP need to work with our people in order to bring that about," Bellegarde said.

Lucki said the Mounties are focused on thoughtful action based on what they have been hearing in conversations with advisory groups, Indigenous communities and Indigenous employees.

"As part of our plan, the RCMP in each province and territory are using a trauma-informed approach to co-develop reconciliation strategies," she said, adding there are also courses on cultural awareness and humility, along with anti-racism training.

She said learning is really just one step on the path of reconciliation.

"We have a new Indigenous lived experience advisory group, which is now providing us with advice on how to advance reconciliation and address systemic racism issues," she said.

"We're partnering with Indigenous women's groups, initiating an equity, diversity and inclusion strategy. And we are now in the midst of formalizing a brand-new office for RCMP Indigenous collaboration, co-development and accountability."

'I saw what I saw': Indigenous services minister responding to truck door arrest in Nunavut