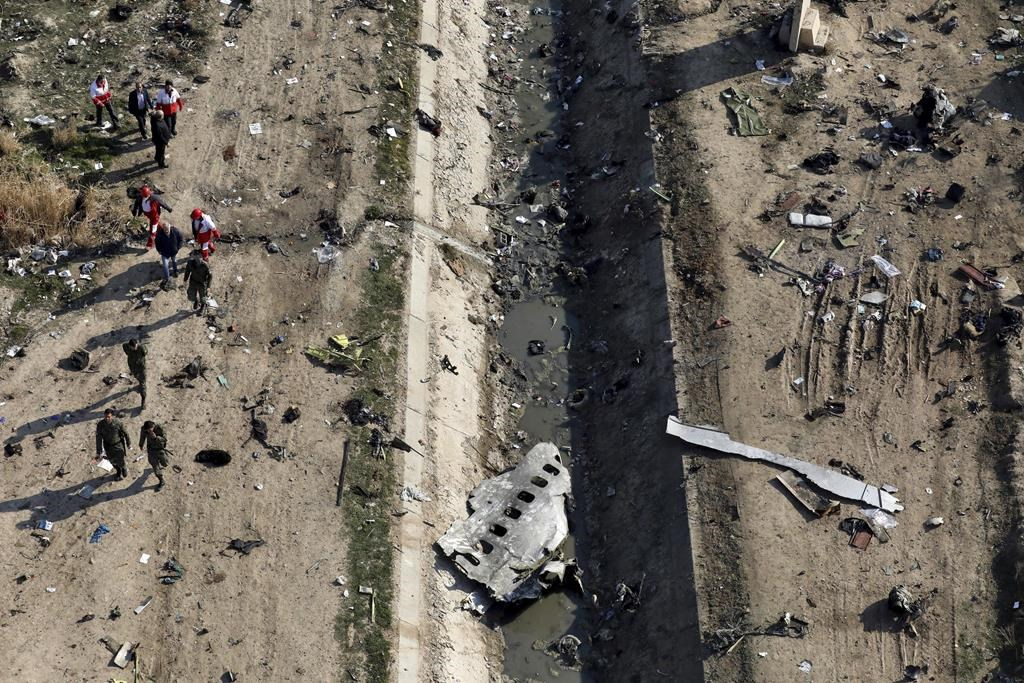 It is unusual for the TSB to comment on the results of a report into an incident that took place in another country.

Under international civil aviation rules, the country where the incident took place is in charge of the investigation and addresses questions and concerns from affected nations in its final report.

But board chair Kath Fox said the "unprecedented situation" where the Iranian military effectively oversaw the investigation compelled the agency to speak out Thursday, noting that dozens of its comments and questions went unanswered in the final report.

The final report from Iran's civil aviation body blamed "human error" as the reason why the Revolutionary Guard shot down a jetliner minutes after it took off from Tehran on Jan. 8 last year.

All 176 people on board were killed, including 55 Canadian citizens, 30 permanent residents and dozens of others bound for Canada.

Iranian officials only explained what happened, provided what Fox called a plausible explanation for the shootdown, and left unanswered questions about what actions Iran's military has taken to prevent a repeat occurrence.

The TSB's concerns added to a mountain of international criticisms about the report released Wednesday.

Domestically, the federal Liberals described the report as devoid of "hard facts or evidence." Ralph Goodale, the former Liberal public safety minister who was named Canada's special adviser on the response to the crash, called the report "shambolic" and "insulting" to loved ones.

Goodale previously recommended the government strike a special group of investigators to look into the incident. A report from that group, which is acting separately from the TSB, is expected in the coming weeks.

The investigation report from Iran's Civil Aviation Organization said a military operator fired two surface-to-air missiles after misidentifying the Boeing 737-800 as a "hostile target" and despite not getting a green light from superiors, as per procedure.

"This investigation needed to look into the military activities that led to their stated cause — which was a misalignment, a misidentification, a miscommunication, a breakdown in procedures — to support that scenario, which they haven't done," Fox said.

"It would be very challenging for any state to investigate its own military activities in such a case, but I think it's important for public confidence in the findings of the report to delve into those areas so that there can be confidence that if it was, in fact, an error, it won't happen again."

Iran initially denied responsibility but three days later said the Kyiv-bound aircraft was accidentally shot down after being mistaken for a missile amid heightened tensions with the United States. The admission came after video footage on social media appeared to show at least one missile striking the jet.

The disaster unfolded hours after Iran launched missiles into Iraq at two American military bases in retaliation for the U.S. having killed top Iranian general Qassem Soleimani near the Baghdad airport by order of then-U.S. president Donald Trump.

The report only partially explains why the airspace remained open and active for commercial airlines after the military action, Fox said. She also said the TSB, Canada's air-safety investigator, does not believe the risk to commercial airlines operating in Iran's airspace has been reduced.

Kourosh Doustshenas, whose partner Forough Khadem was one of victims, said the final report was disappointing but not unsurprising. He said the investigation team wasn't capable of producing an independent report, calling the final product "full of lies and misrepresentations."

"I can't really move on," he said in an interview. "This report, it doesn't help (in) any way or shape to tell the truth, or provide any kind of justification of what happened."

He, like other families, wants to know what the federal government plans to do.

The families, in a statement, called on the Liberal government to push Iran to release more information from the investigation, including through economic sanctions on the Revolutionary Guard, and then consider taking the regime to the International Court of Justice if talks stretch beyond three months.

"We want to know what is the roadmap going forward," Doustshenas said.

- With files from Christopher Reynolds