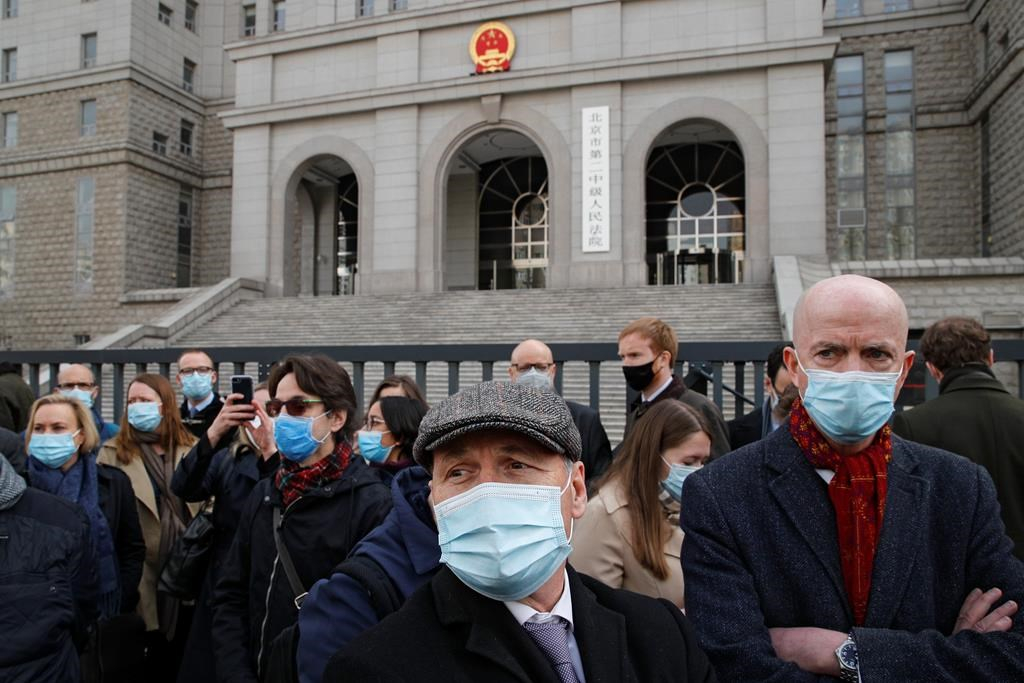 BEIJING — A second Canadian went on trial in Beijing on Monday after being detained for more than two years in apparent retaliation for the arrest in Vancouver of a top executive with Chinese telecom giant Huawei.

The trial of former diplomat Michael Kovrig on spying charges follows an initial hearing in the case of Canadian businessman Michael Spavor, who faces similar charges, in the northeastern city of Dandong on Friday.

Canadian diplomats were denied access to the trials with the explanation the hearings were being held behind closed doors because of alleged national security concerns.

Diplomats and journalists showed up nonetheless to seek information and show support, a move that was applauded by Prime Minister Justin Trudeau Monday as he again condemned the arrests.

"We continue together to demand their release," Trudeau said in French during an event in Trois-Rivieres, Que.

"Their arbitrary detention is unacceptable and we will not give up until both are home."

Outside Beijing's No. 2 Intermediate Court, Jim Nickel, the Canadian Embassy’s deputy chief of mission, said he'd been told the trial had begun, but was barred from entry in what he complained was a violation of China's international and bilateral treaty obligations.

“Michael Kovrig has been detained for more than two years now. He's been arbitrarily detained and now we see that the court process itself is not transparent," Nickel told reporters.

Nickel said 26 countries had sent representatives to show their support, including the U.S., the U.K, Australia and many European nations.

Foreign Affairs Minister Marc Garneau also thanked them all for their efforts.

“The eyes of the world are on these cases and proceedings," he said in a statement.

A second Canadian went on trial in Beijing on Monday after being detained for more than two years in apparent retaliation for the arrest in Vancouver of a top executive with Chinese telecom giant Huawei. #cdnpoli

The Chinese government has provided almost no information about the accusations against the two, but a newspaper run by the ruling Communist party alleges they collaborated in stealing state secrets and sending them abroad.

No verdict has been announced in Spavor's case and it wasn't clear if additional hearings would be held.

However, such cases are almost always predetermined in China, and Beijing is seen as using Kovrig and Spavor as leverage to obtain the release of Huawei executive Meng Wanzhou, who was arrested at the request of the U.S. at the airport in Vancouver in December 2018.

The two Canadians were detained in China just days later and have been held ever since, while Meng has been released on bail and remains under house arrest at her Vancouver mansion.

Meng, meanwhile, is wanted by the U.S. on fraud charges related to Huawei’s dealings with Iran, which is under American financial sanctions.

China's Foreign Ministry has denied any wrongdoing in the handling of Kovrig and Spavor's cases, attributing the timing of their trials to little more than coincidence.

Meng’s case has deeply angered China’s government, which sees her detention as a deliberate attempt to malign Chinese companies and impede the nation's growing economic and political clout.

Beijing has demanded her immediate and unconditional release and has also restricted various Canadian exports, including canola seed, and handed death sentences to another four Canadians convicted of drug smuggling.

Canada and the U.S. have pledged to work together with China to seek the release of the two Michaels, but meetings between top U.S. and Chinese diplomats last week seemed to offer little hope.

While the U.S. and Canada joined with the U.K. and EU Monday to levy sanctions against Chinese officials over human rights violations against minority Muslims in the country, Trudeau said there was no link between that action and joint efforts to free the two Canadian men.