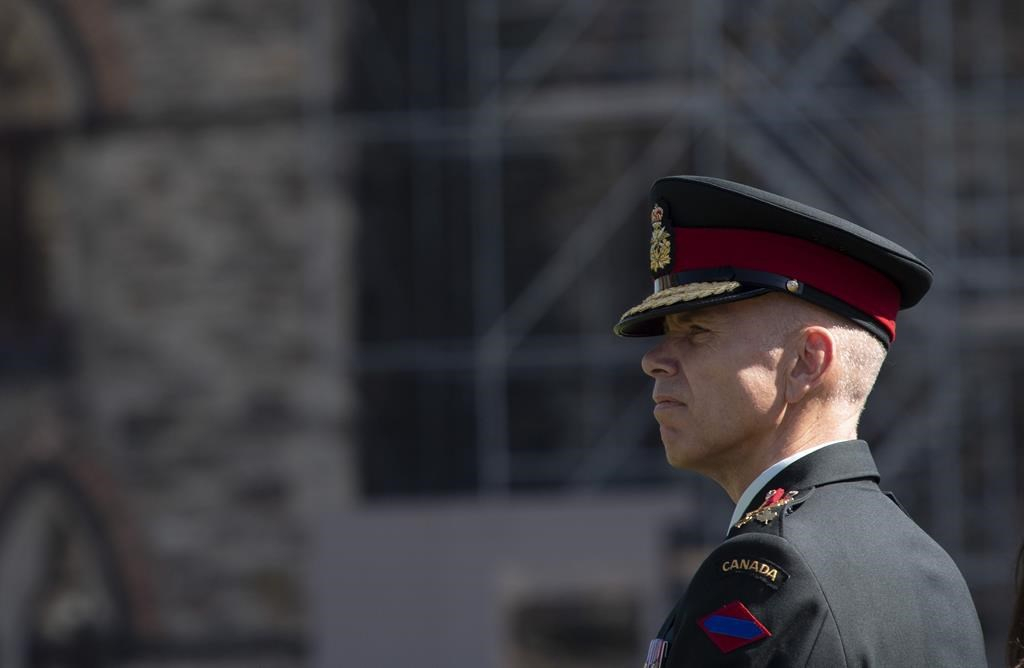 Lieutenant-General Wayne Eyre listens to speakers during a change of command parade for the Canadian Army on Parliament Hill Tuesday, August 20, 2019 in Ottawa. File photo by The Canadian Press/Adrian Wyld
Previous story
Next story

The Canadian Armed Forces is developing a suite of new initiatives aimed at tackling inappropriate behaviour in the ranks, the military’s acting commander revealed Tuesday, including a “playbook” for handling misconduct allegations against senior officers.

The Armed Forces is also looking to update its existing code of conduct to more clearly define actions that are unacceptable, acting chief of the defence staff Lt.-Gen. Wayne Eyre said, and are looking at better ways to select military leaders.

Eyre revealed the pending new measures in testimony to the House of Commons committee on the status of women, the second to probe the Liberal government’s handling of allegations of sexual misconduct against senior military officers.

Those include former defence chief Gen. Jonathan Vance and his successor, Admiral Art McDonald, whose seat Eyre is filling after McDonald temporarily stepped aside last month, only a few weeks after taking over from Vance.

During his testimony, Eyre acknowledged the allegations against senior leaders had shaken service members, and suggested the military is at “an inflection point” when it came to misconduct in the ranks.

He repeatedly linked the problem of inappropriate sexual behaviour in the military to "power dynamics," and said that is one of the areas the military needs to better understand if it is to eliminate such misconduct.

“One of the things we have to get much better at understanding is human power dynamics, especially in a fairly rigid military hierarchy,” Eyre told members of the committee. “Understanding what constitutes the use … of that power.”

Such analysis is unlikely to develop overnight. In the meantime, Eyre listed a number of different initiatives in the works to address sexual misconduct on a shorter timeline.

That includes coming up with the “playbook,” the development of which Eyre said was one of his first orders upon being named acting defence chief on Feb. 24, “to help me deal with any further incidents of senior-leader misconduct, so we can rapidly deal with those.”

Eyre did not provide further details, except to say the document is now in draft form.

The Canadian Armed Forces is also planning to update its existing code of conduct, Eyre said, “to add much more detail to what is expected under each of our values, and then we need to hold ourselves to account.”

The acting defence chief also indicated the military is looking at ending Operation Honour, the all-encompassing effort to eliminate sexual misconduct that was first launched by Vance upon his taking command of the Armed Forces in July 2015.

Some, most notably Lt.-Col. Eleanor Taylor, who recently announced that she was quitting the military following its failure to address misconduct in the ranks, have suggested that Operation Honour was poisoned because senior leaders failed to set good examples.

“I believe, and I've heard from many, that perhaps this operation has culminated and we need to harvest what has worked from there, learn from what hasn't, and go forward with a deliberate change plan,” Eyre told the committee.

The acting defence chief, who was appearing with Lt.-Gen. Frances Allen, the first woman to be named second-in-command of the Canadian Armed Forces, also said work had already started on new ways to select and promote military leaders.

That includes psychological testing and giving subordinates more say in how prospective leaders are assessed in an attempt to identify “toxic behaviours.”

“We started this work last fall,” Eyre said. “It's going to rapidly progress. We're going to start at the most senior levels, and then work down. But I'm quite excited about the work we're doing here to add more rigour into our leader selection.”

For her part, Allen said she has seen a “marked change” in how the military treats women in uniform since she first joined the Canadian Armed Forces. But she conceded that “more needs to be done.”

Earlier in the committee meeting, Defence Minister Harjit Sajjan faced another round of grilling from opposition parties over his handling of an allegation of sexual misconduct against Vance after then-military ombudsman Gary Walbourne raised it with him in March 2018.

Sajjan, who has faced similar questions during two previous appearances before the Commons defence committee, said he told Walbourne to take the allegation to the military’s sexual misconduct response centre or military police.

The minister also suggested that his own decision to refer the matter to the Privy Council Office was exactly the same action as the previous Conservative government took when it learned of similar allegations against Vance in 2015.

Ray Novak, who was prime minister Stephen Harper’s chief of staff at that time, told the defence committee on Monday that the Conservatives were aware of two allegations against Vance before he was promoted to chief of the defence staff in July 2015.

Novak said those allegations were investigated by the military police and then-national security adviser Richard Fadden, who works out of the Privy Council Office, the department supporting the Prime Minister’s Office, but that they did not find any evidence of wrongdoing.

Military police are now investigating Vance after Global News reported an allegation that he was involved in an ongoing relationship with a subordinate that began more than a decade ago and continued after he became defence chief.

Global has also reported that Vance allegedly sent a lewd email to a different female soldier that he significantly outranked before he took command of the military. Vance has declined requests for comment, but Global has said that he denies any wrongdoing.

McDonald is also being investigated by military police on an unspecified allegation of misconduct. He has not commented on the allegation.