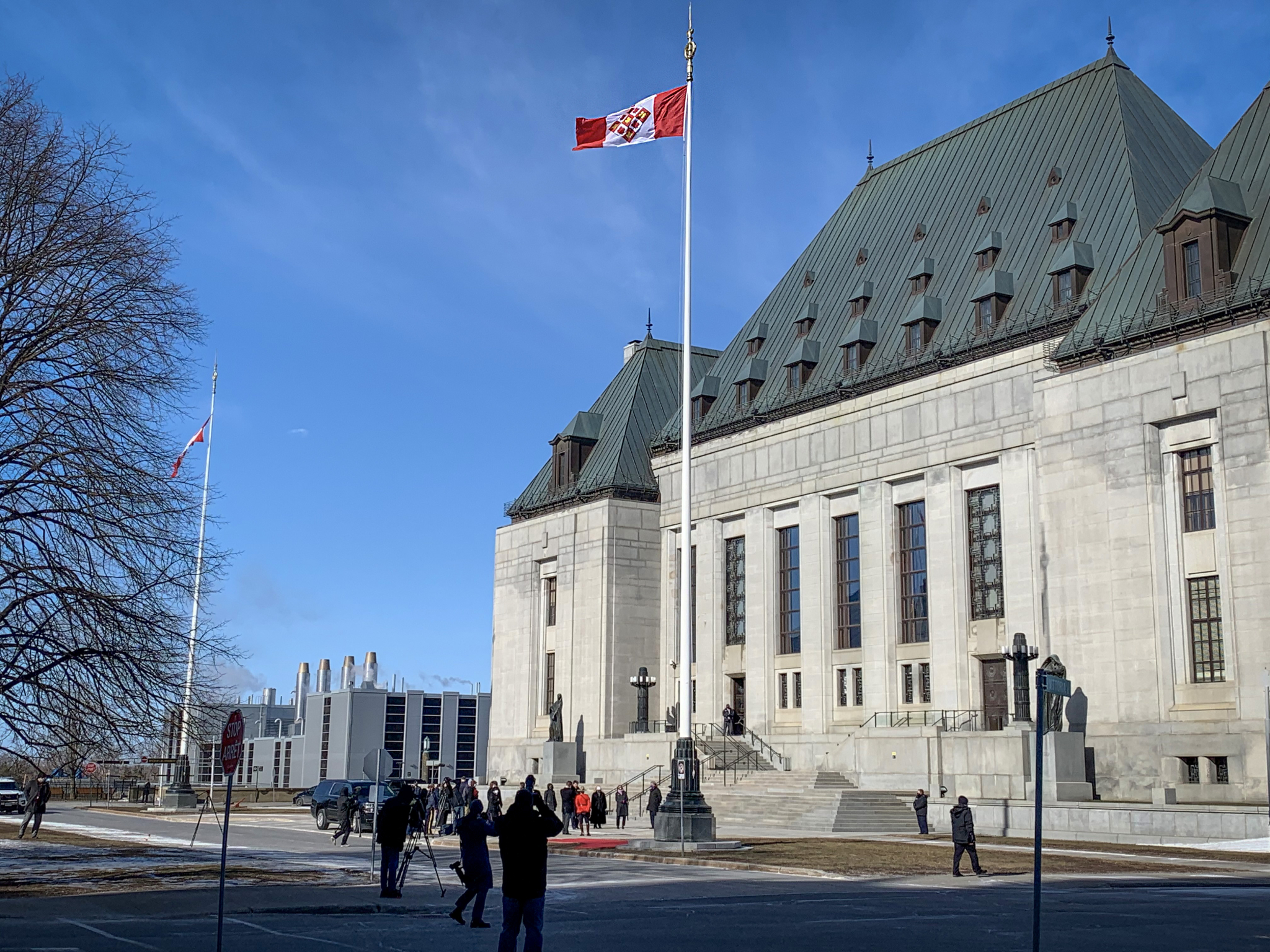 The Supreme Court of Canada on March 15, on the occasion of the unveiling of its new flag. SCC Photo / Twitter
Previous story
Next story

Parliament acted constitutionally when it passed the federal government’s carbon pricing law, the Supreme Court of Canada has ruled.

In a 6-3 decision released March 25, the Supreme Court said the Greenhouse Gas Pollution Pricing Act, enacted three years ago, was properly a matter of national concern and had limited constitutional impact on provincial jurisdiction.

The ruling puts an end to a years-long legal quest by the governments of Saskatchewan, Ontario and Alberta to challenge the law.

Each of the three provinces had asked their appeals courts to rule on the law's constitutionality. The Alberta Court of Appeal had found the law to be unconstitutional.

'Strongest' language on climate from any Canadian court

The seriousness of the climate emergency meant that establishing minimum national standards for pricing carbon pollution "is of sufficient concern to Canada as a whole that it warrants consideration in accordance with the national concern doctrine," wrote Wagner.

Climate change is a "threat of the highest order to the country, and indeed the world," he wrote. "The undisputed existence of a threat to the future of humanity cannot be ignored."

Josh Ginsberg, the director of the Ecojustice Environmental Law Clinic at the University of Ottawa, which intervened in the case, said in an interview that Wagner's statements represented "very strong language, the strongest we've seen from any court in this country so far."

The Supreme Court has ruled that the federal carbon pricing law is constitutional. If Parliament were unable to address carbon pollution, it ruled, the harm would be borne disproportionately by vulnerable communities. #cdnpoli

"This is a court that gets the nature of the emergency that we face," said Ginsberg. “It means that Canada is on the map when it comes to fighting climate change."

Canada produces more than its fair share of emissions per capita, he argued, and is the world’s fourth largest crude oil exporter, so the country has an obligation to step up and fight the climate crisis.

But without national action, he said, it was clear that Canada had been failing to do so. "So now, we're sending a message to the world that Canada is in this fight, and that we are one of the countries that is taking climate action very seriously."

The law establishes national standards for carbon pollution pricing and applies in provinces that have not adopted their own pricing systems that meet minimum criteria.

The provinces had argued in part that the law encroached on their autonomy, and that a federally imposed national pollution pricing system would upset the balance of federalism in Canada.

Saskatchewan and Alberta also said the federal government already had jurisdiction to cut carbon pollution, for example by making it a crime to pollute under the Criminal Code.

Wagner wrote that while the matter has a “clear impact” on jurisdiction, it was “qualified and limited” as greenhouse gas pricing is a “narrow and specific regulatory mechanism.”

While it may interfere with a province's decision to prioritize economic considerations over environmental ones, the chief justice wrote, “it is necessary to consider the interests that would be harmed — owing to irreversible consequences for the environment, for human health and safety and for the economy — if Parliament were unable to constitutionally address the matter at a national level.”

“This irreversible harm would be felt across the country and would be borne disproportionately by vulnerable communities and regions, with profound effects on Indigenous Peoples, on the Canadian Arctic and on Canada’s coastal regions. In my view, the impact on those interests justifies the limited constitutional impact on provincial jurisdiction.”

The provinces could choose to establish a carbon pricing scheme of their own, but doing so "would not assure a sustained approach" because the provinces and territories are "constitutionally incapable of establishing a binding outcome-based legal standard" that would apply everywhere in the country, at all times.

Ginsberg said he hoped the ruling would put an end to the "over-politicization" of fighting climate change. The legal questions are settled, and the obligations of the federal and provincial governments are now clear.

Federal Environment and Climate Change Minister Jonathan Wilkinson on Thursday called it "an historic day for Canada, and for our planet, for the economy, and for all Canadians for generations to come."

“As of today, the federal government can continue to use a price on pollution as one key element of its comprehensive climate plan, because climate change impacts Canadians no matter where they live in this country," said the minister.

But Wilkinson could not resist taking a few jabs at his political opponents. While the governing Liberal Party has "outlined a detailed plan," he argued, Conservative Leader Erin O'Toole and his party were "offering a big question mark, or perhaps better said, a big magic black box."

O’Toole, the leader of Canada’s official Opposition, vowed on Thursday to revoke the law if elected. The Conservatives say they will unveil "a clear and comprehensive climate plan" of their own in the near future.

In the ruling, Wagner pointed out the federal carbon pricing system is not a "carbon tax" as it is often called, but rather a regulatory mechanism.

"While 'carbon tax' is the term used among policy experts to describe greenhouse gas pricing approaches that directly price greenhouse gas emissions, it has no connection to the concept of taxation as understood in the constitutional context," he wrote.

Ginsberg also acknowledged that while a future government would technically be able to revoke the law, in addition to being politically risky, Thursday’s ruling also suggested there could be a “constitutional imperative” to keeping carbon pricing in place.

Many intervenors before the Supreme Court had argued their constitutional rights, particularly those of First Nations, would be impaired without carbon pricing.

'A victory for women and girls'

The National Association of Women and the Law and Friends of the Earth Canada hailed the ruling as a "victory for women and girls."

“The climate crisis will impact everyone, but individuals and groups that already face systemic inequality will be disproportionately impacted, since climate change can exacerbate existing inequalities and create new forms of discrimination,” said Nathalie Chalifour, co-counsel for both groups, in a statement.

Canadian unions also welcomed the ruling, said the Canadian Labour Congress. Working people and their families were "already suffering the effects of climate change in the form of forest fires, floods, droughts and severe heat stress" and so have a "personal investment" in combating the climate crisis, the organization said.

Ontario Environment Minister Jeff Yurek said he was "disappointed" in the Supreme Court's decision, but that the province would respect it and move on.

In September 2020, the federal government approved an Ontario plan to price carbon pollution, even though Wilkinson had called the system “clearly weaker” than the federal regime it was replacing.

"What we are going to do, and continue to do, is implement an environment plan that protects land, air and water, achieves our climate change goals, makes life affordable for families and small businesses, while protecting the environment,” said Yurek.

Ontario’s climate plan “allows us to put our emissions performance standards in place so that the big polluters are paying for their pollution, and at the same time able to stay in Ontario and grow jobs,” he said.

“I think we have a healthy balance in our environment plan and look forward to implementing more priorities coming forward."

Brown and Rowe fully dissented to the ruling, saying they did not accept Parliament had the authority to enact the pollution pricing law, and that it was therefore not a legitimate application of national concern.

In the reasons he delivered, Rowe argued the provinces are distinct and there is value in "regional diversity," as provinces can produce policies "tailored to local realities" since they are closest to their own citizens and their needs.

The Canadian federation "guarantees the autonomy of both orders of government within their spheres of jurisdiction" and that their relationship was one of "equal partners, not subordination," he argued.

Meanwhile, Côté said she agreed with Wagner's analysis of the national concern doctrine, but she could not agree that the law, as currently drafted, was constitutional.

The wide range of discretion that the law gives the government "results in the absence of any meaningful limits on the power of the executive," she wrote.

"When an act endows a select few with the power to re-write, and thus re-engineer, a law which affects virtually every aspect of individuals' daily lives and provincial industrial, economic and municipal activities, it goes too far."

By Mia Rabson | News, Politics | March 25th 2021
Reports from the Race to a Safer World

By Mia Rabson | News, Politics | March 23rd 2021
Reports from the Race to a Safer World