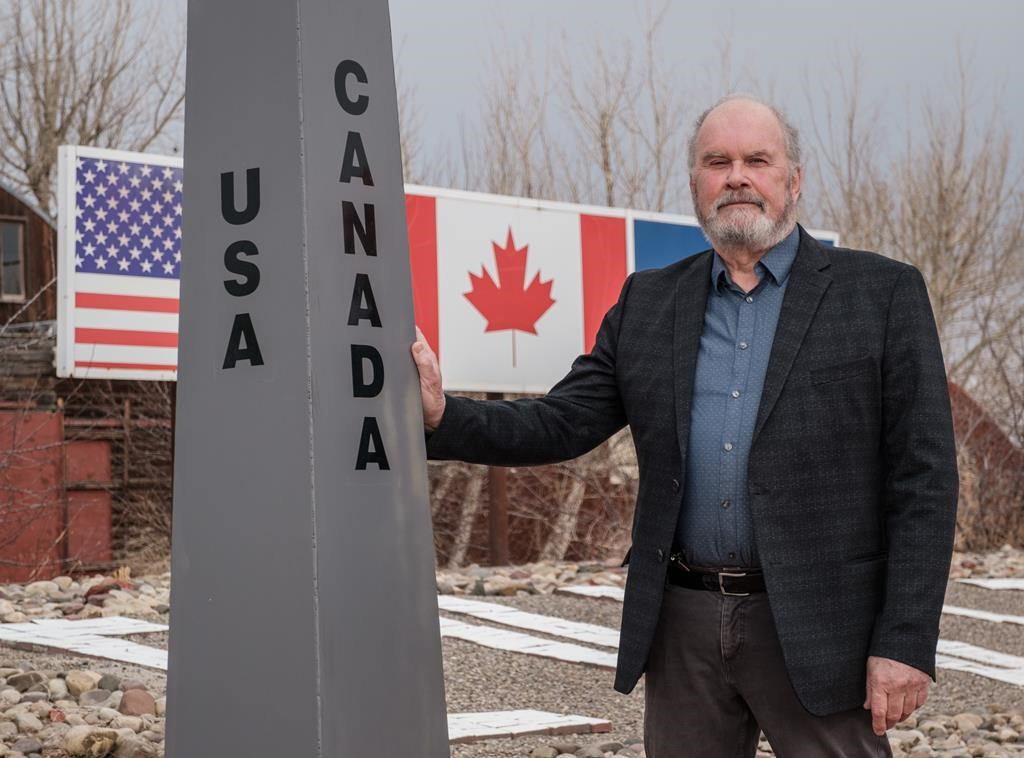 Jim Willett, mayor of the Village of Coutts, Alta., poses for a photo on Wednesday, March 24, 2021. File photo by The Canadian Press/David Rossiter
Previous story
Next story

The mayor of a small Alberta border town says semi-trailers rolling through the community serve as a constant reminder of the pandemic's effect on the lives of community members.

“It's almost like somebody just erased a year,” says Jim Willett, the mayor of Coutts.

The world's longest undefended border was first shut down on March 21, 2020, as the COVID-19 pandemic tightened its grip. It was the first such closure since Confederation in 1867.

The land crossing at Coutts and Sweet Grass, Mont., is one of the busiest between Canada and the United States. The lives of many people in the area straddle the two countries.

“They kind of grew up as the same place and somebody drew a line down the middle,” says Willett.

The border serves as an important economic driver for nearby communities, so COVID-19 has hurt. Willett says the duty-free store had to lay off most of its staff. The town’s bar was closed and has recently been sold.

Sports leagues that played on both sides, including a widely popular darts league in Montana, have shrunk significantly.

But Willett says requirements to isolate upon return to Canada have helped some businesses.

“The guy in the motel is happy because he has all his rooms booked.”

The border closure has also separated families. When a nursing home in Shelby, Mont., was hit by COVID-19, many of those who died had strong connections to Coutts. Nobody could go and pay respects.

The mayor of a small #Alberta border town says semi-trailers rolling through the community serve as a constant reminder of the pandemic's effect on the lives of community members. #COVID19

A place along the border with a chain-link fence has become a meeting spot. People bring coffee and chairs, sit along either side and catch up as border guards watch. Willett says he heard about a wedding happening through the fence.

Closing the border has also made people in Coutts a lot closer, Willett says, because they've been forced to spend time more time in their home community.

“People kind of look around and realize what they have,” the mayor says. “It's good in that way. We are finding positives.”

In similar communities across the country, the relationship with their U.S. neighbours drastically changed when the border closed to most travellers last March.

Every person near the border crossing in southern Manitoba has been affected in some way, says Emerson-Franklin Reeve David Carlson. Some people have lost jobs and others, especially seniors, have felt the isolation brought on by restrictions.

But Carlson says being a small town is also an advantage in dealing with the pandemic.

When rinks closed, people pushed snow off ponds and laced up their skates. There was a community effort to make sure to look after each other. And, when people spend too much time at home, there are lots of places to explore outdoors without worrying about running into anyone.

In Amherstburg, Ont., many people are still crossing the border because they are considered essential workers in Detroit.

The community, a short drive from the Windsor-Detroit border crossing, has had high rates of infections, some of which are linked to that commute.

Aldo DiCarlo, the town’s mayor, says it means people are wary about the border opening any time soon.

"There have to be some checks and balances about who is crossing and what safeguards have been put in place, so that we aren't bringing COVID in from a whole other country.”

For months after the border closed the community was like a ghost town, DiCarlo says, but the citizens of Amherstburg decided to make the best of a challenging situation.

Some streets downtown were closed to traffic last summer to allow businesses and restaurants to safely bring in customers, the mayor says. That's being planned for this year as well.

“It gave people an opportunity to get out and experience at least some semblance of normalcy, albeit distancing,” DiCarlo says.

“But at least you saw people moving around again.”

Co-operation happening at the Canadian-U.S.A. border may surprise you

By The Canadian Press | News, US News, Politics | June 9th 2020
Coronavirus in Canada