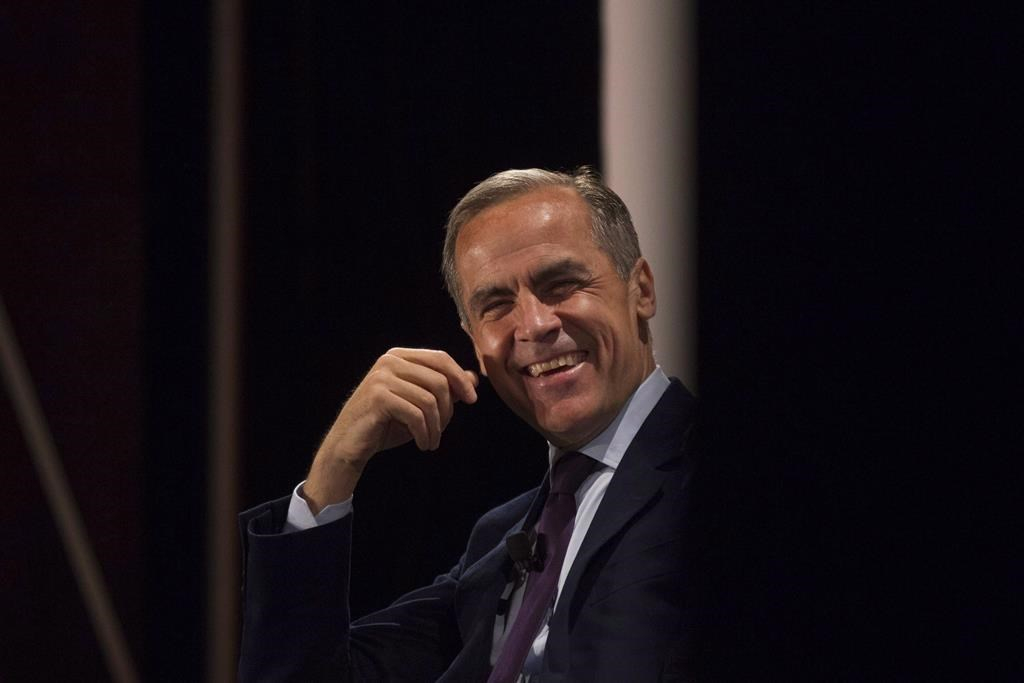 Bank of England governor Mark Carney participates in a discussion with Canada's Federal Minister of Environment and Climate Change in Toronto on July 15, 2016. File photo by The Canadian Press/Chris Young
Previous story
Next story

Mark Carney, long touted as a potential Liberal leader one day, will be a keynote speaker at the federal party's convention later this week.

It's a political coming out party of sorts for the former governor of the Bank of Canada and the Bank of England.

Until recently, his role as a central banker required Carney to avoid any hint of partisanship.

But he is known to have nevertheless quietly flirted with the idea of jumping into politics, and Liberals have bandied his name about for at least 10 years.

Back in 2012, after the Liberals suffered their worst electoral thrashing in history, questions about a leadership run grew so intense that Carney was compelled to deny any interest with a stinging rejoinder: "Why don't I become a circus clown?"

He left the country shortly thereafter to take over the helm of the Bank of England, but speculation about his interest in federal politics intensified once again with his return to Canada last summer and the recent release of his memoirs, “Value(s): Building a Better World for All.”

The book spells out Carney's prescription for a sustainable, more inclusive, post-pandemic economic recovery, based on the lessons he learned from managing monetary policy in Canada during the 2008 financial crisis and in Britain during the tumultuous aftermath of that country's exit from the European Union.

Carney's name also came up again as a potential candidate to fill Morneau's Toronto Centre seat. But he did not run, and the vacancy was instead filled by former broadcaster Marci Ien, one of the co-chairs of the April 8-10 virtual convention.

Since the release of his book last month, Carney has been coy about his political ambitions. He's insisted he's focused on his work as the United Nations special envoy on climate action and finance and his new role as vice chairman of Brookfield Asset Management Inc., where he is overseeing the global investment firm's expansion into environmental and social investing.

#MarkCarney, long touted as a potential Liberal leader one day, will be a keynote speaker at the federal party's convention later this week. #CDNPoli

But he has not categorically ruled out a political future.

Carney's appearance at the Liberal convention, which starts Thursday evening, may not herald a plunge into the political arena. But it does mark the first public dipping of his toe into partisan waters.

It comes just over a week ahead of Freeland's first budget, which could tip the minority Liberal government into an election if all three opposition parties vote against it.

Should an election be triggered during the continuing COVID-19 pandemic, Liberals will get some advice during the convention about how to conduct a virtual campaign from two veterans of last fall's U.S. presidential campaign: Caitlin Mitchell, senior digital adviser for the Biden-Harris ticket, and Muthoni Waambu Kraal, former national political and organizing director for the Democratic National Committee.

The convention itself will be entirely virtual, with more than 5,000 registered Liberals expected to take part in what party spokesman Braeden Caley calls the largest policy convention in Liberals' history. Trudeau will deliver a keynote address on Saturday.

Caley said the convention will focus on four broad themes: protecting Canadians' health, ensuring the economy "comes roaring back," protecting a clean and healthy environment and creating a fairer and more equal Canada.

He predicted it will present a "stark contrast" to last month's Conservative convention, where delegates debated whether climate change is real, rolling back women's right to choose and weakening gun control.

This report by The Canadian Press was first published April 4, 2021.

By The Canadian Press | News, Politics | December 1st 2019
Reports from the Race to a Safer World

Mark Carney returns to Canada with a message

By Hamish Stewart | Opinion, Energy | July 15th 2016
Reports from the Race to a Safer World