Jagmeet Singh needs to get serious about climate change 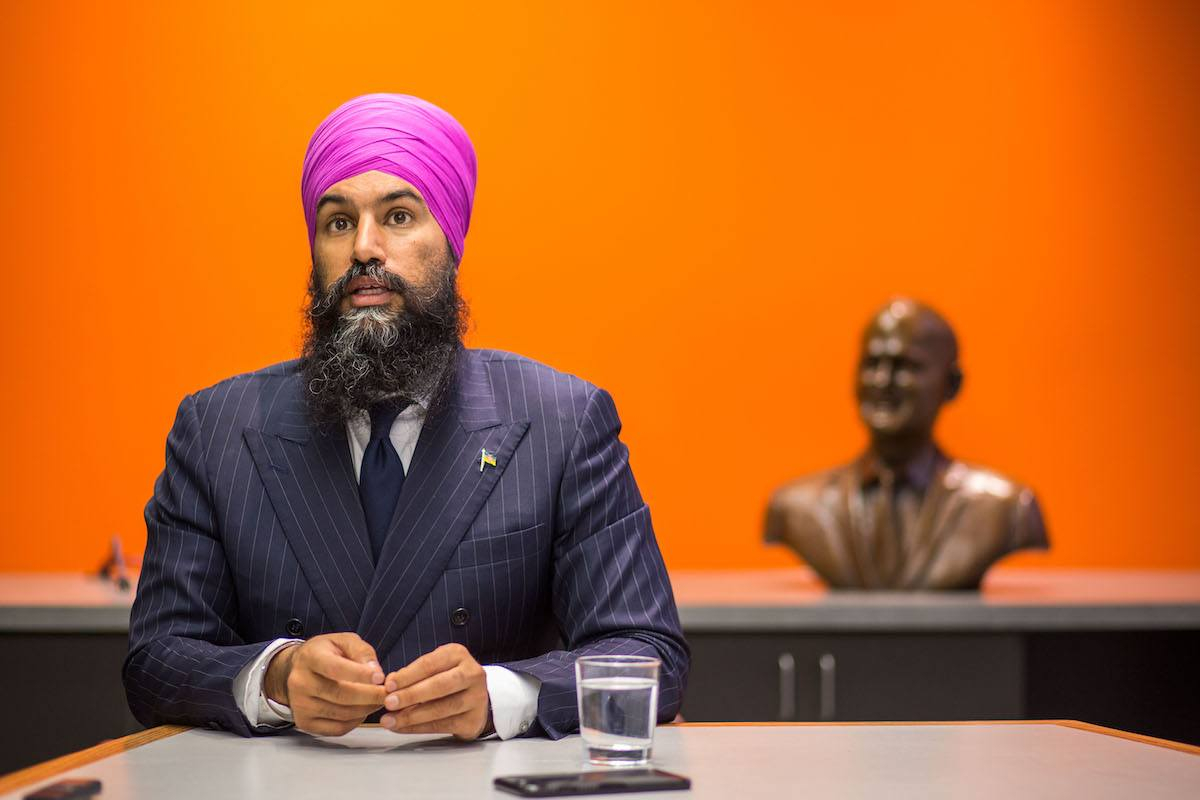 By ceding the climate ground to Trudeau, Jagmeet Singh and the NDP are allowing him to wrongly define what climate action looks like, writes Cameron Fenton. File photo by Alex Tétreault
Previous story

Over the past few weeks, two big climate stories dominated Canadian media. The first was the membership of the Conservative Party of Canada voting down a resolution to acknowledge climate change is real. The second was the Supreme Court upholding the legality of Justin Trudeau’s carbon price. A common thread in both conversations? The NDP was nowhere to be found.

This isn’t new. Since the 2019 election, NDP Leader Jagmeet Singh has rarely mentioned climate change in the House of Commons. He has never pushed legislation around it or led a media blitz challenging Trudeau’s climate record. Even on social media, where Singh communicates his top priorities directly, he barely mentions it.

In fact, his only comment about the climate crisis in 2021 was a tweet responding to Joe Biden cancelling the Keystone XL pipeline. When Singh talks about climate change, he doesn’t seem to have interest in the topic, delivering a clumsy talking point about Trudeau buying a pipeline. The result is a national climate debate where the conflict is between Liberal climate delay and Conservative climate denial. And as long as this is the sandbox our policies are being written in, we’re going to fail to act at the scale we need.

By ceding the climate ground to Trudeau, Singh and the NDP are allowing him to wrongly define what climate action looks like. In the six years since Trudeau was first elected, Canada has failed to reduce emissions, increased public handouts to Big Oil, delivered a climate plan that’s half as ambitious as what we need and fallen short on a just transition and support for front-line communities. And yet, polling shows 71 per cent of the country thinks the prime minister is either “good” or “acceptable” on climate.

We can blame some of that on the media’s failure to cover the climate crisis properly, decades of Big Oil funding, climate denial and Trudeau’s actions being compared to that of the Trump administration, and so on. But, while these are important, the hard truth is that Singh has been letting Trudeau off the hook when it comes to climate change. That’s a big deal when you remember that in 2019, climate change was a top voting issue and that recent polls show it remains a top concern, alongside issues related to COVID-19 and how the economy recovers.

Don’t get me wrong, there are NDP members of Parliament who are true climate champions. Whether it’s Laurel Collins’ work as environment critic, Peter Julian’s opposition to the Trans Mountain pipeline or Leah Gazan’s push for a new Climate Emergency Act, there are MPs in the NDP caucus who truly get the urgency of the crisis and are doing what they can to call attention to it. But their great work is overshadowed by a party apparatus and leader’s office who seem ambivalent about the scale of the climate crisis. The hard truth is that whatever actions these MPs take, they make far less of a dent in the public discourse than the actions of the party leader.

Singh needs to understand that in 2021, bold climate policies that tackle injustice and create millions of good jobs need to be at the centre of a winning progressive agenda. And effective progressive leaders need to be able to sell that agenda day in and day out. We’ve seen it work in the U.S., where the progressive wing of the Democratic Party forced Joe Biden to embrace key aspects of the Green New Deal. If Singh and the NDP want to be Canada’s equivalent to Alexandria Ocasio-Cortez and Bernie Sanders, they need to demonstrate the same ability to move the Liberals on climate.

But, the NDP’s best option isn’t to do it alone. That’s why we’re launching a new campaign, calling on the NDP to join forces with the Green Party to form a historic Climate Emergency Alliance. This alliance could present a truly bold vision for climate action and have a chance at electing dozens of climate champions who would hold the balance of power in Parliament. The numbers are clear, according to our modelling: without a Climate Emergency Alliance, the parties could win a combined total of 23 to 29 seats. With one, they’re within a winnable margin in 108 seats all across Canada.

Let’s face it. Without a big idea like this, the Liberals and the media will both frame the next election as a race between the Liberals and the Conservatives with the NDP shoved somewhere to the side. When it comes to climate change, that’s the same as a fight between delay and denial, and that’s something we can’t afford. If the NDP wants to be the modern, progressive party to change this, they need to take some big, bold steps. At this weekend’s convention, the party has the chance to reckon with its climate failures and act to chart a new course.

A Climate Emergency Alliance is the best way to do that.

By ceding the climate ground to Trudeau, Singh and the NDP are allowing him to wrongly define what #ClimateAction looks like, writes @CamFenton. #JustTransition #ClimateJustice #cdnpoli

I think there are strong

I think there are strong historical reasons to oppose an NDP green alliance. As lacking as the NDP’s policies can be in supporting workers and class-based politics there is a central understanding of the importance of collective solutions, government intervention and wealth redistribution. The Green Party has primarily been a party of small business supporting market solutions. From the Green party members I have debated over the last couple of decades there is, at best, a limited understanding of working-class issues. That said, the possibility of a Climate Emergency Alliance is worth considering, but it depends on the basis for an alliance. If there is an instance that carbon pricing form the central part of the campaign with some sort of off-setting welfare payments then for me it is non-starter. That plan will not solve the climate crisis: carbon pricing and the market are too slow and preferentially dominant-class based. And, it will not address legitimate concerns about inequality and economic insecurity which require aggressive policies for wealth redistribution, job guarantees, and unionization: all part of a green transition plan. This is a more complex problem than a short response, but unless this problem is addressed, while the idea of an alliance is nice, it is doomed for failure, and those in the green party who want a more aggressive market-based solution should probably push the Liberals in that direction. Engaging in a fight with the NDP on the hope of swinging NDP votes green will spend a lot of energy, and be fruitless – especially when the NDP’s climate action plan is stronger.

"The NDP's climatte action is

"The NDP's climatte action is stronger"? Give me a break. How about going on the Green Party website and actually reading their policies? Then you can respond with facts instead of conjecture. Debating with members of the Green Party doesn't guarantee they are responding with Green policies or just their own opinion.
The NDP - federal or provincial - has spent decades spreading misinformation and propaganda about the Green Party. I voted NDP - federally and provincially - for decades. I was completely frustrated with their lack of concern for environmental destruction and climate change. I stopped voting for them in 2015 and I will never go back.
I also find the NDP is intellectually vacant on innovative and creative social policy for the 21st century. I'm tired of provincial NDP governments maintaining "blame and shame" social welfare systems, and using only market solutions as their answer to pressing problems. The federal NDP only came up with a Universal Basic Income after the Greens introduced their Guaranteed LIVABLE income. It was the Greens that pushed for equality marriage rights - not the NDP. It was the Greens who pushed for legalization of cannabis . It was the Greens who have been pushing for a fair transition in the economy off fossil fuels; the NDP just jumped on the band wagon. The NDP is so 20th century. I don't think the Greens would go for an alliance.

"The only thing necessary for

"The only thing necessary for the triumph of evil is for good men to do nothing."
The NDP and leader Jagmeet Singh are virtually silent on climate.
One would expect the NDP to be hammering the Liberals on obvious policy contradictions, foot-dragging, failure to reduce emissions, support for fossil fuels, push for new pipelines, and public deceptions. Poking holes in the Liberal climate narrative. Exposing the gap between their rhetoric and their actions. Challenging them on the push for nuclear power (SMRs).
The Liberals declared a climate emergency in 2019. Then what? The next day, Trudeau approved the Trans Mtn expansion project for the second time. The NDP is Missing in Action.
What is Singh afraid of?

On climate Canada suffers from a failure of leadership all round.

Absolutely!! Part of the

Absolutely!! Part of the problem is the constant nit-picking for the perfect combination of "agenda items" that will NEVER HAPPEN!! So, recognizing that there will definitely be NO CHANGE when nobody acts, the only thing to do is go for it!! (I've already signed 350.org's petition, and this weekend's convention is gonna be a game-changer!)