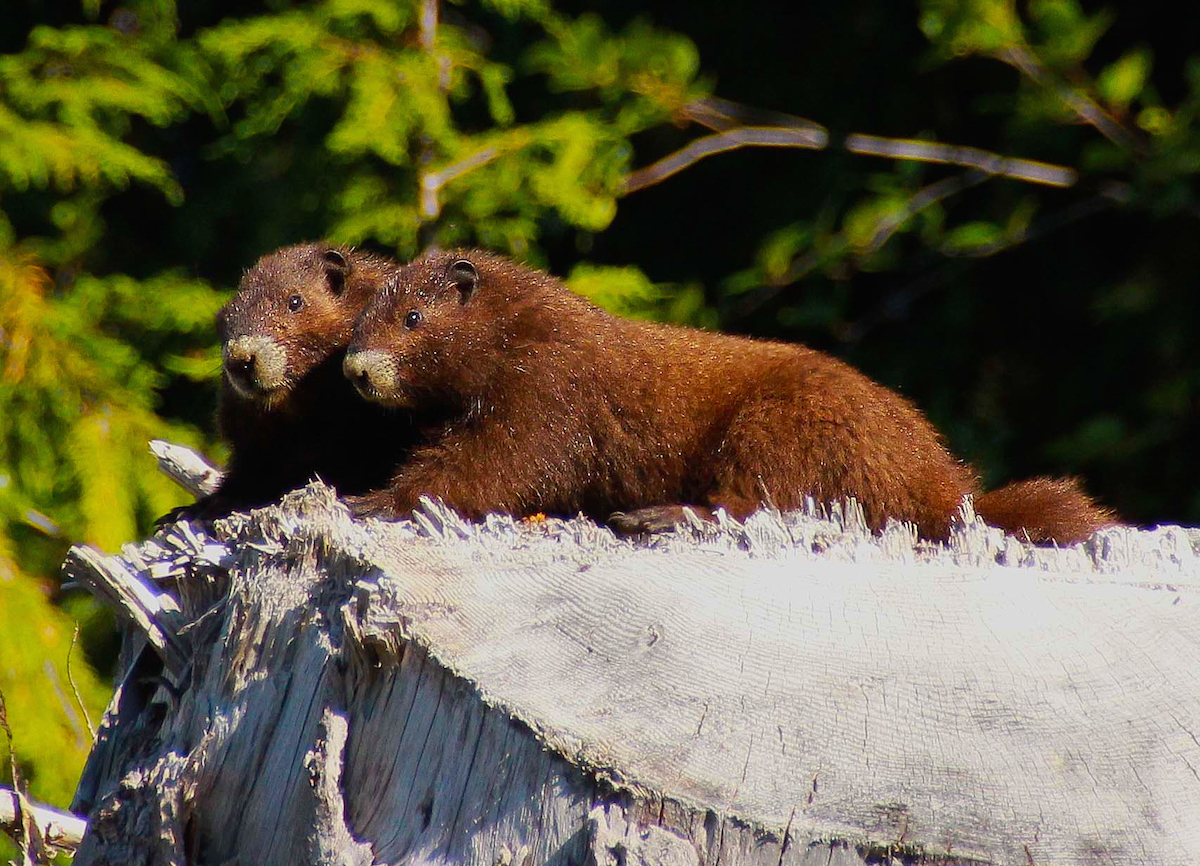 A grainy, short — but sordid — sex tape has surfaced on the internet, and its unwitting participants are bound to be unaware of any ensuing scandal or notoriety.

Eugenie and her boyfriend Pepsi were caught on tape getting frisky this past week at the Mount Washington captive breeding centre for endangered Vancouver Island marmots.

“I’m afraid the quality of the video is not great, but perhaps that’s in keeping with its content?” joked Adam Taylor, executive director of the Vancouver Island Marmot Recovery Foundation.

The marmots — cat-sized cousins to chipmunks and woodchucks — are just starting to stir after their long winter hibernation, Taylor said.

They aren’t doing much as their systems slowly boot up after a seven-month sleep — other than having sex.

And the cameras capturing the marmots' mating habits are not solely a question of voyeurism, Taylor said.

“We are actively trying to tape them in the act because we are a captive breeding facility, and the whole point is the marmots are going to get it on,” he said.

“But the cameras are actually there because we want to disturb them as little as possible while making sure we can keep a close eye on their welfare.”

On the brink of extinction, the Vancouver Island marmot, Marmota vancouverensis, is one of the rarest mammals in the world.

“I’m afraid the quality of the video is not great, but perhaps that’s in keeping with its content?” says Adam Taylor, executive director of the Vancouver Island Marmot Recovery Foundation. #BC #Nature #Wildlife

But through recovery efforts, the sweet alpine rodents have gone from under 30 wild marmots in 2003, to a current population of approximately 200 living in 20 mountaintop colonies across Vancouver Island.

Breeding the marmots and releasing the pups into wild colonies after a year with their parents acts like a life-raft for the species.

This year, the foundation plans to release 33 captive-bred yearlings into the wild — double the numbers of past years now that the captive marmots are at their peak reproductive years.

A lot can be learned by studying the mating pairs on camera at the facility, Taylor said.

Because marmots, both captive and wild, are quite shy, watching video recordings provides a window into their behaviour and interactions without disturbing them, he added.

“It does help determine which marmots might have offspring later on,” Taylor said.

“This pair is pretty frisky, so we're really hopeful that they're going to have pups.”

Females usually birth between two to six pups, but even in captivity, it will be awhile before researchers see results.

The pups will likely be born in mid-June and won’t fully emerge from nest boxes at the facility, or from underground burrows in the wild, until July.

“Until then, all we can do is listen for the pups,” Taylor said.

“But unlike a wild setting, we do have the cameras right there, so we (will) see the moment they poke their noses out.”

But right now, the adult marmots are only moving around for about 10 minutes a day, Taylor said.

Using that time to mate may sound like a great way to start spring, but it’s actually the most perilous time of year for wild marmots, he said.

Marmots can lose up to third of their body mass while in hibernation, he added.

“They’ve basically used up all of the fat they’ve stored, and we hope that they have enough stored energy left to reinvigorate their metabolism and get moving again,” Taylor said.

In some cases, the marmots wake up and even emerge from their burrows, but their reserves are too low to fuel their digestive system, he said.

“In the past, we’ve had marmots that literally passed away with food in their mouths because their stomachs didn't have any way of processing it.”

To better ensure their well-being, the marmots get fed supplemental vegetation biscuits before and after hibernation.

The foundation has actually experienced two back-to-back years of fairly low mortality and good pup production in the wild colonies, and hopes to see it again this summer, Taylor said.

Although, due to the stress hibernation and pregnancy puts on a female marmot, they tend to breed alternate years, he added.

“We’re hoping that we'll have an overwinter survival of between 85 to 90 per cent. That would be ideal,” Taylor said.

But biologists with the foundation won’t be able to determine mortality rates and pup numbers in the wild colonies until summer, when the snowpack melts and the mountain meadows are accessible.

Until then, researchers have to rely on making their observations via video recordings at the facility, Taylor said.

In an effort to get better quality footage of their behaviour and mating, a portable GoPro camera was set up in one of the nesting boxes, Taylor said.

Eugenie and Pepsi ignored the camera when it wasn’t running, but things turned on a dime when it was activated and emitted a small beep, he said.

Eugenie immediately went over to the camera and promptly flipped it over, rendering it useless.

“As soon as it went on, Eugenie decided, 'Boom!' That she was not going to have any of that,” Taylor said.

“So we’re stuck with grainy footage unless we figure out how to turn off the beep when the camera turns on.

“She’s made her feelings pretty clear.”

Apparently marmots don't like cameras in their homes. Eugenie decides that enough is enough, and decides to send us a message. Recorded yesterday at the Tony Barrett Mount Washington Marmot Recovery Centre. pic.twitter.com/RiHWO8t7Yx