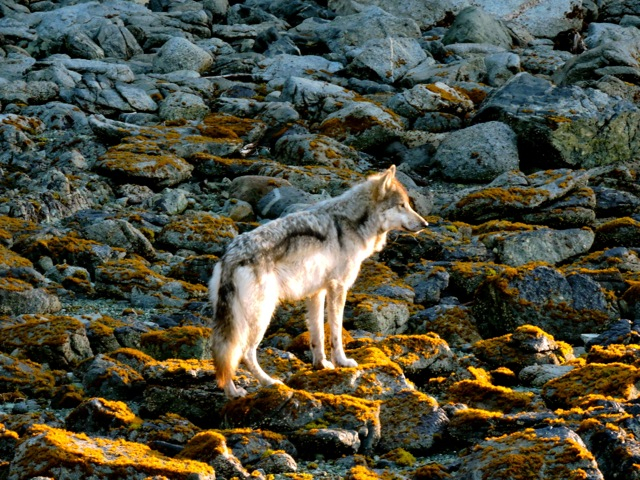 Hunting regulations in B.C. allow hunters to kill up to three wolves per year, and there is currently no limit on trapping. Photo by Mathieu.S.Addison / Wikimedia Commons (CC BY-SA 4.0)
Previous story
Next story

In February, Sooke trophy hunter Jacine Jadresko made headlines after posting Instagram photos of herself holding two local wolves she’d killed. The attention-seeking “huntress” — whose notoriety began when she appeared in a documentary raving about travelling to Africa to kill a lion — claimed she planned to wipe out the remaining members of the wolf pack. Outrage at Jadresko’s actions was matched only by people’s disbelief that she was technically working within the confines of the law. Hunting regulations in British Columbia allow hunters to kill up to three wolves a year, and there is currently no limit on trapping.

Unwittingly, Jadresko’s post catalyzed a contentious discussion on wolf hunting, and whether tighter restrictions are needed.

Oak Bay officials sent a resolution to the Union of BC Municipalities asking the provincial government to place a moratorium on recreational wolf killing until new regulations could be sanctioned to protect the apex species. Sooke Mayor Maja Tait backed the resolution. “It’s not so much about the individual, it’s about how we as a society view wolves in the year 2021,” she said. “Despite everything we learn and see, we view them as vermin in the way the regulations are not protecting them.”

Tait also wrote to B.C.’s Forests, Lands, Natural Resource Operations and Rural Development Minister Katrine Conroy requesting more immediate action. “The (Union of BC Municipalities’) annual general meeting doesn’t happen until the end of September, so we wrote to the minister directly and asked, ‘Can you put this in place now?’”

During a press conference back in February, Conroy said she was working to close the loopholes in the system so “this type of behaviour is prevented in the future.” So far, no moratorium has been enacted. A written statement from ministry spokesperson Tyler Hooper states that wolf populations on Vancouver Island are healthy, and under no immediate threat.

Wolves are a resilient species and have an innate ability to rebound after “persecution,” says Chris Darimont, a conservation scientist and the University of Victoria’s Raincoast Research Chair. “If you kill 50 per cent of a wolf population in one year, in Year 2, that population is going to be back in just as high of numbers.”

To Darimont, however, that resiliency doesn’t preclude the need for tighter wolf hunting regulations. “Policy-makers in B.C. still act like it’s the 1980s and think only about numbers of animals in the landscape,” he said. “An appropriate and necessary component of wildlife management policy is considering the views, social norms, and societal values of not just hunters, but 10 times more people who are not hunters.”

Jesse Zeman, director of fish and wildlife restoration at the B.C. Wildlife Federation, takes a slightly different stance. A conservation organization, the federation also advocates for “anglers, hunters, outdoor recreationalists, firearm owners and recreational shooters.” Zeman considers wolf hunting an essential management tool in protecting deer populations on the island, which have been drastically reduced due to commercial logging.

In the winter, deer require old- to medium-growth forests for shelter, says Zeman. As clear-cutting continues and more logging roads are developed, they end up clustered together in small oases of remaining giants. The roads help wolves move through the landscape, Zeman says, allowing them to travel from patch to patch, killing deer in disproportionally high numbers.

“Essentially, unsustainable logging has tipped the scale in favour of wolves over deer,” said Zeman.

“Policy-makers in B.C. still act like it’s the 1980s and think only about numbers of animals in the landscape,” says @ChrisDarimont, a conservation scientist and the University of Victoria’s Raincoast Research Chair. #BC #WolfHunt

A major challenge in the discussion on hunting, says Zeman, is the differing perspectives people bring to it depending on their location. “It’s not a straightforward discussion,” said Zeman. “Folks need to recognize that what you see in the wilderness is not what you see in the cities, and that’s why things are quite often moving in different directions.”

The debate is further complicated when taking into account the rights and needs of Indigenous people, who have a greater reliance on wildlife for food. Decisions like hunting bans affect First Nations’ ability to access resources, said John Henderson of the Wei Wai Kum First Nation (Campbell River Indian Band) and president of the Wildlife Stewardship Council.

Henderson says that even if Indigenous people were exempt from a wolf hunting ban, as some are proposing, he wouldn’t be in favour of the moratorium. “Whether you’re a guide outfitter or whether you’re a resident hunter or whether you’re a First Nations person — we’re all the same,” said Henderson. “We rely on management tools that are available to us (for sustenance), and when you take the tools away, we all suffer the consequences.”

A moratorium, even with an exemption, would still negatively impact Indigenous peoples, Henderson said. He uses the ban on grizzly bear hunting as an example. That ban, which went into effect in 2017, stipulated that Indigenous people may continue to hunt the animal. “There’s nothing stopping Native people from shooting grizzly bears, but if we do, what happens? Fingers get pointed at us,” Henderson said. “We become the bad guys. We don’t want to be a scapegoat for British Columbians, and that’s what will happen.”

Henderson says animals need to be managed in a way that’s respectful, but that, by and large, existing policies work.

Darimont, a hunter himself, also condemns Jadresko’s trophy-hunting behaviour and disagrees with almost all wolf kills.

“There’s no reason for most people to hunt wolves, except for Indigenous peoples who have an inherent, cultural, and constitutionally protected right to do so,” said Darimont. “For non-Indigenous people who want to kill in the name of recreation, hatred, sport, trophy, perceived management goals — for all of those reasons, and other trivial ones other than a cultural right to do so, or immediate protection of life, I, like most British Columbians, strongly oppose.”

It is true. In wilderness,

It is true. In wilderness, wolves and other predators regulate themselves to match the availability of prey. This is the natural law of healthy ecosystem management. Then humans come along and devastate, upend, greedily rip the law to shreds. In their heyday, Indigenous peoples around the world adapted to this law through migration and/or self restraint.

Europeans have always treated wilderness as a free larder to exploit, destroy or, in some cases restrict access to this larder to themselves and to those wealthy enough to "own" the fields and forests. Everyone else was a poacher - a crime punishable by death.

Now we punish the competitors to our hegemony with bounties that equal the death sentences once imposed on poachers. - except, even worse - we REWARD the poachers. How perverse!

Let me get this straight,

Let me get this straight, Jesse Zeman (director of fish and wildlife restoration at the B.C. Wildlife Federation)...

You consider "wolf hunting an essential management tool in protecting deer populations on the island, which have been drastically reduced due to commercial logging." while acknowledging that "in the winter, deer require old- to medium-growth forests for shelter."

Why would the solution to protecting deer populators, killing wolves? Why isn't it preventing commercial logging of the medium and old growth forests?