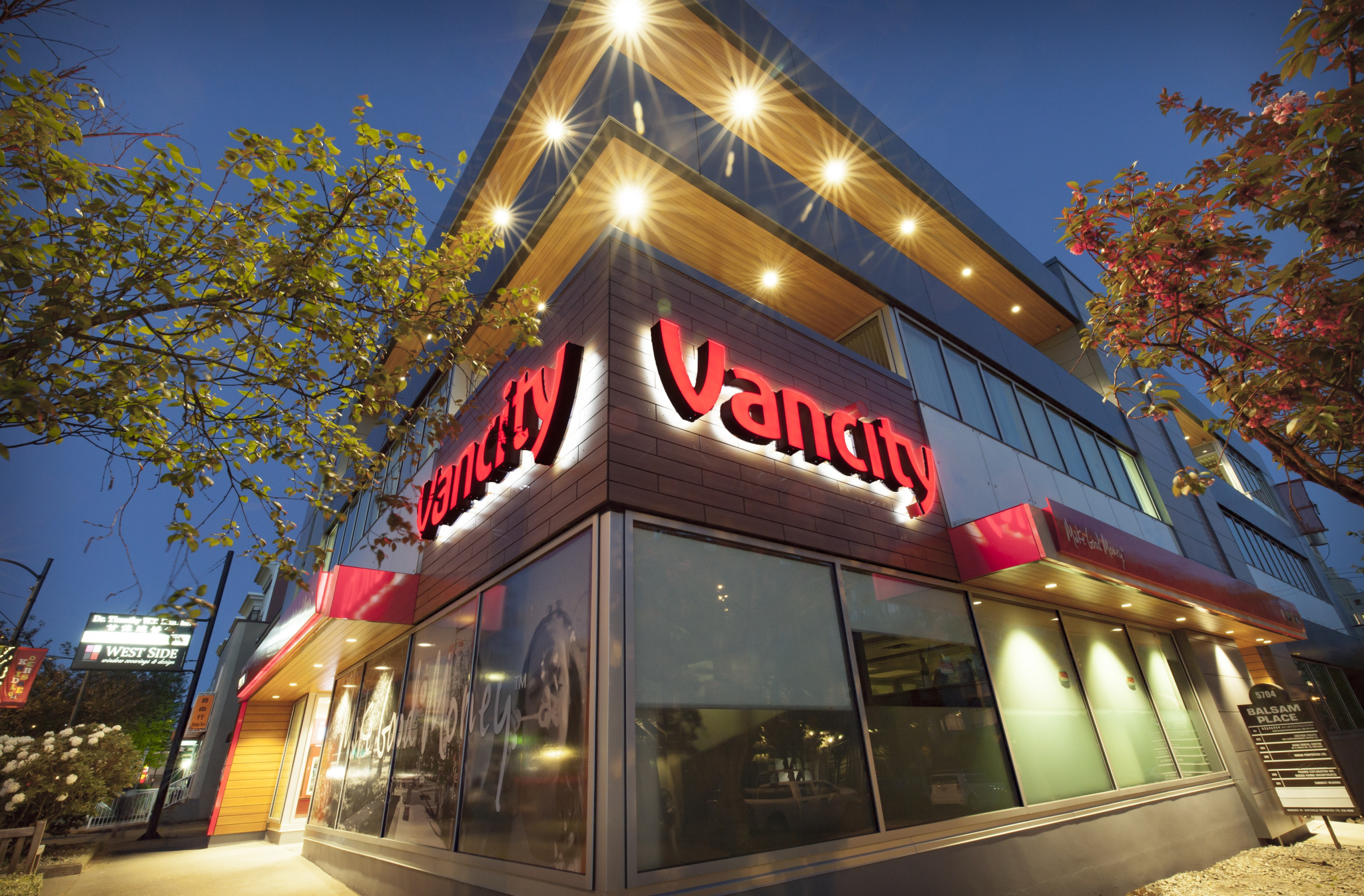 A Vancity branch in Vancouver. The credit union was the only Canadian financial institution to join a new global banking coalition for net-zero emissions. Vancity photo
Previous story
Next story

Vancouver credit union Vancity was the only Canadian financial institution to join Wednesday’s launch of a new global banking coalition for net-zero emissions.

None of Canada’s big five banks were founding signatories of the UN-convened Net-Zero Banking Alliance (NZBA) that promised April 21 to align investment portfolios with science-based climate targets starting in 2030.

Mark Carney, UN special envoy on climate action and finance, is chairing the Glasgow Financial Alliance for Net-Zero (GFANZ), which also launched Wednesday and counts the banking coalition as one of its arms.

At a virtual launch event, Carney said GFANZ will also involve other arms for asset managers, donors and insurance companies, ultimately bringing together a significant slice of the world’s top financial institutions under the Paris Agreement goals.

“They have one shared mission: To broaden, deepen and accelerate the transition to net-zero by 2050 at the latest,” he said. “We can expect GFANZ to grow further in the lead-up to COP26 in Glasgow,” the next UN climate summit scheduled for November.

Alliance 'made sense for us,' says Vancity director

Financial institutions that have signed up are expected to set emissions targets within 18 months for 2030 and 2050, as well as intermediate targets every five years, that are consistent with assessment reports from the Intergovernmental Panel on Climate Change.

A further round of sector-level targets is expected within 36 months related to various carbon-intensive sectors, such as oil and gas, power generation, transportation, and heavy industry.

Backing the whole effort is the UN’s Environment Program Finance Initiative (UNEPFI), which has published guidelines for climate target setting for banks.

“When the UNEPFI came to us, with the NZBA, it really made sense for us, given the place that we’re in,” said Alison Coates, director of climate strategy and performance at Vancity, in an interview.

None of Canada’s big five banks were founding signatories of the Net-Zero Banking Alliance to align investments with science-based #ClimateTargets. Vancity was the only Canadian financial institution to join.

“We’ve been committed to climate action for a really long time; we know that banks and credit unions control trillions of dollars, and they have a real impact on the direction of the economy.”

Vancity has set its own net-zero goal by 2040 and is in the process of setting interim targets for 2025, and expects to soon disclose its financed emissions — the name for the carbon pollution that comes from companies and activities underpinned by financial institutions.

Bankers group: Banks should make up their own minds

The Canadian Bankers Association, which represents over 60 domestic and foreign banks operating in Canada, including the big five banks — TD, BMO, Scotiabank, RBC and CIBC — said it has not taken a position on whether its members should join the net-zero alliance.

“The decision to join groups like these is taken at the individual bank level,” said Mathieu Labrèche, the association’s director of media strategy.

TD bank is “currently engaged in discussions” regarding the alliance, said Lynsey Wynberg, senior manager for corporate and public affairs. TD announced its commitment to a “climate action plan” in November 2020, including a net-zero target for its operations and financing by 2050.

CIBC spokesperson Kathryn Lawler said the bank was "committed to environmental sustainability, and are currently evaluating all opportunities that help develop the agreements and tools necessary to align financial decision-making with the transition to a low-carbon economy."

BMO, Scotiabank and RBC and did not respond to requests for comment.

The bankers' association says Canadian banks “understand that the financial sector is central to securing the transition to a lower-carbon economy” and that they “recognize the urgency of addressing climate change” and are “committed to a net-zero economy by 2050.”

The Banking on Climate Chaos report published in March said large Canadian banks have put $726 billion into fossil fuel companies since the Paris Agreement was signed.

During the virtual launch, U.S. Special Presidential Envoy for Climate John Kerry said the UN’s December 2020 climate finance report revealed the “enormous gap” in financing needed to fund new green technologies and adaptation and mitigation strategies that will be necessary to tackle the climate emergency.

“The only place that any of us could really think of where we have the ability to be able to meet this challenge,” said Kerry, “is frankly, in the end, the private sector.”

“Governments have taken a hands-off approach to regulating banks and other financial institutions, and that must change to force them to decarbonize and to respect Indigenous rights,” said Stewart.

Editor's note: After this story was published, CIBC provided a comment which has now been included in the text.