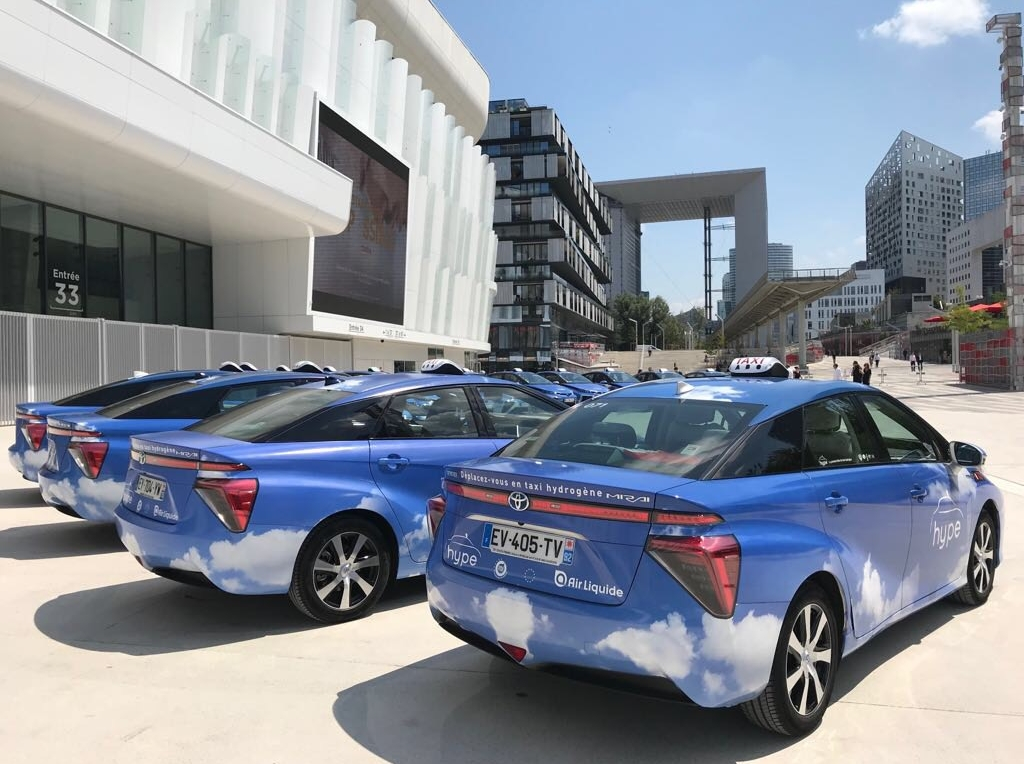 A fleet of hydrogen-powered taxis in Paris in 2018. Air Liquide photo
Previous story
Next story

A Bloc Québécois MP asked federal government officials Monday if they could cite any scientific papers backing Canada’s plan to rely on the oil and gas industry for help in growing a market for hydrogen fuel.

Bloc natural resources critic Mario Simard made the comments during a meeting of a House of Commons committee that is studying the low-carbon and renewable fuels industry in Canada.

“What scientific study are you using as your justification to say that hydrogen is a viable way to transition to a green economy?” Simard asked Mollie Johnson, Natural Resources Canada assistant deputy minister for the low-carbon energy sector.

Johnson responded that the government’s objective is to “move towards the lowest carbon intensity of hydrogen,” expecting that as technology evolves and the hydrogen market grows, prices will come down — ultimately allowing for cleaner hydrogen, made from the electrolysis of water, to become cost-competitive with hydrogen produced from fossil fuels.

“That’s what really gets us to it being a viable transition strategy,” said Johnson. “Our focus is on reducing carbon intensity, and when we talk about hydrogen that is being produced from oil and gas, it really is with carbon capture and storage, so it is to reduce that carbon intensity and build on the strength of our energy sector in that way.”

The government says hydrogen fuel can be a “transformative opportunity for Canada’s petroleum sector,” since one way to make it is by converting natural gas, a fossil fuel — but, unlike gas, it does not emit carbon pollution itself when used as an energy source, for example in fuel cell vehicles.

In this way, the government is hoping to repurpose the Canadian oil and gas sector’s expertise and 576,000-strong labour force, and the country’s network of natural gas pipelines and storage facilities, to kick-start a hydrogen economy.

As an initial step, the government expects the industry to ramp up production of hydrogen from natural gas while deploying carbon-capture technology during the conversion process to lessen its carbon footprint.

The 2021 budget’s tax incentives for carbon-capture and hydrogen production were designed to help drive down the cost of clean hydrogen, officials said.

The federal hydrogen strategy, released in December 2020, says a hydrogen economy could lead to 45 million tonnes of carbon pollution reductions by 2030, and up to 190 million tonnes by 2050.

Bloc natural resources critic Mario Simard asked government officials Monday if they could cite any scientific papers backing the plan to rely on oil and gas for help in growing a #hydrogen market. #cdnpoli

Scientific research, however, has highlighted the destructive effects of methane, the main component of natural gas, to the planet’s atmosphere, leading to questions from environmental groups about whether it is reasonable to rely on oil and gas in the low-carbon transition.

The oil and gas sector is one of the largest sources of methane, as the industry flares or vents it off in operations, and it leaks accidentally from equipment.

A major UN scientific report next month is expected to show that nations need to accelerate methane emissions cuts in order to avoid more extreme climate change effects, according to the New York Times.

Simard said he had spoken to engineers and other specialists about the interim plan to produce hydrogen from natural gas. “Many people think that it’s a good strategy to find opportunities for the oil and gas industry,” he said, but not so much for a green transition.

“Have any studies been done to prove that (natural gas-made) hydrogen can be used for the energy transition?” he asked again, later on.

“There have been lots of studies,” Johnson replied briefly, before passing the rest of her response time to Aaron Hoskin, a senior manager in the department’s Fuel Diversification Division.

Hoskin, who said he was the lead on the development of the government’s hydrogen strategy, said it relied on “more than 15 different studies that looked at production pathways across the country” as well as opportunities for hydrogen use and supply chain requirements.

“We had 14 targeted stakeholder sessions, where we spoke to more than 1,500 experts across the entire hydrogen value chain,” he said. “All of those studies were rolled into the development and finalization of the hydrogen strategy.”

Can you ask for the 15 studies that the Gov't relied on and examine them? Often it becomes apparent that quoted studies do not support the conclusions claimed.

They'll probably stonewall by insisting on an ATIA request that they'll then ignore for months. But hang in there!

Finally, someone is challenging the greenwash that hydrogen from natural gas, which is primarily methane, is a reasonable solution to climate change, rather than just another marketing opportunity for the fossil fuel industry. Thank you. More please....

"... will be reduced over time ..." It's the "over time" part that's problematic. Canada's fossil-fuel-heavy approach will take far too much time to reduce our emissions sufficiently. Meanwhile, authorities keep approving new fossil fuel exploration, coal mine development and other climate change accelerators.

Meanwhile, I would not be at all surprised if there were fifteen studies that said hydrogen is awesome. The oil and gas lobby pay a lot of PR companies to write a lot of words. Credible studies, that make their assumptions and calculations clear? Maybe not so much.

Finally, the whole notion supposedly is, we make hydrogen the not-so-green way now in hopes that technology will allow us to do it the green way just as cheaply in the future. But as far as I can tell, the laws of thermodynamics kind of make that impossible. The point of fossil fuels is, once upon a time a lot of living organisms made chemicals that stored energy (mostly getting the energy from the sun via photosynthesis), and then died before they could use the energy in their metabolism. So we get free energy when we find puddles of their remains. So the natural gas they're going to make into hydrogen already has energy stored in it, that's why it's a fuel. The hydrogen they strip out of it doesn't store particularly more energy in it than the natural gas already did. Who knows, maybe the reaction actually releases energy.
On the other hand, making hydrogen from electricity requires adding a bunch of energy. You're taking water and splitting it into hydrogen and oxygen--and the thing is, water is what you get when you BURN hydrogen and oxygen. So you're running that burning in reverse, and to run burning in reverse you have to add in the energy that the burning released.

It doesn't matter how awesome your technology is, it's going to cost less energy to turn one fuel into another fuel, than to turn exhaust fumes back into gasoline. So making hydrogen with electrolysis is never going to be competitive with stripping hydrogen out of natural gas. And they know it. Moving to electrolysis isn't the plan, it's the flim-flam.

Speaking of electrolysis, though . . . say we were thinking of using hydrogen for transportation. Why? Hydrogen is not going to displace battery. So at best, the plan would be to build and maintain two separate incompatible vehicle infrastructures. The electricity one would involve wires. The hydrogen one would involve pipelines and tanker trucks and a very escape-oriented and volatile gas, persuaded in various ways to have much more density than it ought to. All so that instead of just using electricity to power cars, you can instead use electricity to make this stuff that you then use to power cars. That is, the whole point of the exercise is to add a huge extra layer of inefficiency to what is in the end electricity-based. It's idiotic. And incidentally, while battery cars don't have the range of gasoline or diesel, neither does hydrogen--but batteries keep getting better, while I don't think there's as much room for change in how much energy hydrogen generates when it burns.

There are potential places for hydrogen in our infrastructure. It might be handy for energy storage at wind/solar farms. You can make and store the hydrogen on site when you're generating more power than you need, then burn it when you need it. Doesn't require a whole huge infrastructure with leakage and such because you just keep it in the one place where you make it. Note that this use has nothing whatsoever to do with natural gas.

But for transportation, certainly road or rail transportation, the only reason anyone is saying anything about hydrogen is it's the next gambit of fossil fuel companies in their struggle for survival. We need to stop listening and just get on with killing them.