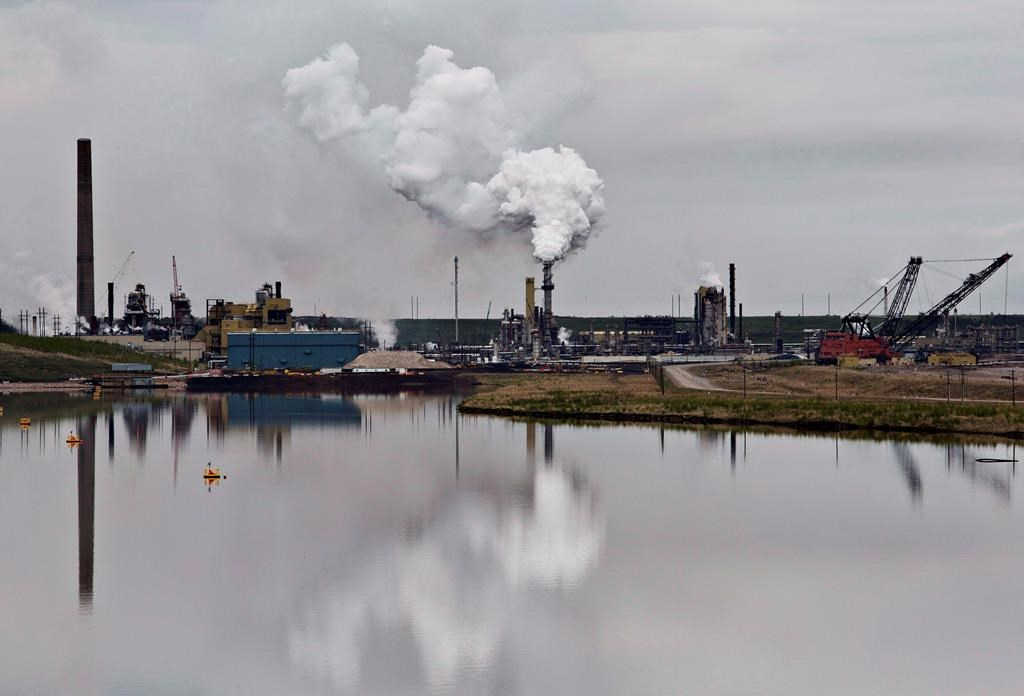 The Syncrude oil sands extraction facility is reflected in a tailings pond near the city of Fort McMurray, Alta., on June 1, 2014. File photo by The Canadian Press/Jason Franson
Previous story
Next story

The findings on methane from Environment Canada researchers could complicate regulatory attempts to nearly halve releases over the next five years, says an environmental group.

"That target will not be met unless the regulations are significantly strengthened," said Dale Marshall of Environmental Defence.

Methane is released from oil and gas infrastructure such as pumps, pipelines and valves during everyday operations. Its effects in climate change are about 30 times more powerful than carbon dioxide and both industry and government have been working to keep it contained.

How much methane is being released has been contentious.

Current estimates are based on the difference between how much methane enters oilpatch infrastructure and how much is left at the other end. In a paper published in the journal Environmental Science and Technology, Environment Canada scientists instead used actual measurements of methane in the atmosphere.

Eight years worth of data from four points in Alberta and Saskatchewan show the previous total of 1.6 megatonnes is an underestimate. The study found three megatonnes.

"It's off by a lot," said lead author Doug Worthy. "It's almost twofold."

The study doesn't specifically address where the unreported methane is coming from. Worthy said there's likely to be a wide range of sources and amounts.

"There might be known, unreported emissions or emissions (industry) doesn't have to report."

For instance, methane sources around oil storage tanks are underestimated and could be significant, he said.

The report's findings are being welcomed by industry.

"The industry is working closely with government and regulators to continue to build a detailed understanding of methane emissions and their efficient management," said a statement from Jay Averill of the Canadian Association of Petroleum Producers.

"The more we know about the sources of methane emissions, the better we can find ways to target and reduce those emissions."

Marshall pointed out the paper comes days after Environment Canada announced deals with Alberta and Saskatchewan that said proposed provincial methane regulations would achieve the same reductions as ones Ottawa had designed.

The paper's conclusions are more evidence that they won't, he said.

"The federal regulations say you have to do a lot more leak detection and repair. That's when you see when the pipes are leaking, when the compressors aren't working, when the tanks are emitting huge amounts of methane.

"The provincial regulations are weaker on leak detection."

Federal Environment Minister Jonathan Wilkinson should have known research from his own department would cast doubt on the equivalency of the provincial rules, said Marshall.

"I don't know what's worse — that he did know and just did it anyway or that he didn't know."

"Methane emissions provide some of the most cost-effective approaches to reduce greenhouse gas emissions in the country," she said.

"We will continue to monitor and review the effectiveness of the federal regulations and will continue to work with provincial partners, civil society, and industry to ensure that these objectives are achieved."

She said Ottawa will report on the effectiveness of the methane regulations late next year.

Worthy said research now turns to refining the numbers and getting a clearer picture of exactly where the emissions are coming from. It will also work to distinguish emissions from fields that are primarily natural gas and those that produce mostly oil.

But the amount of methane that Canada will have to keep out of the atmosphere will increase, he said.

"I do think the inventory numbers are going to come up."