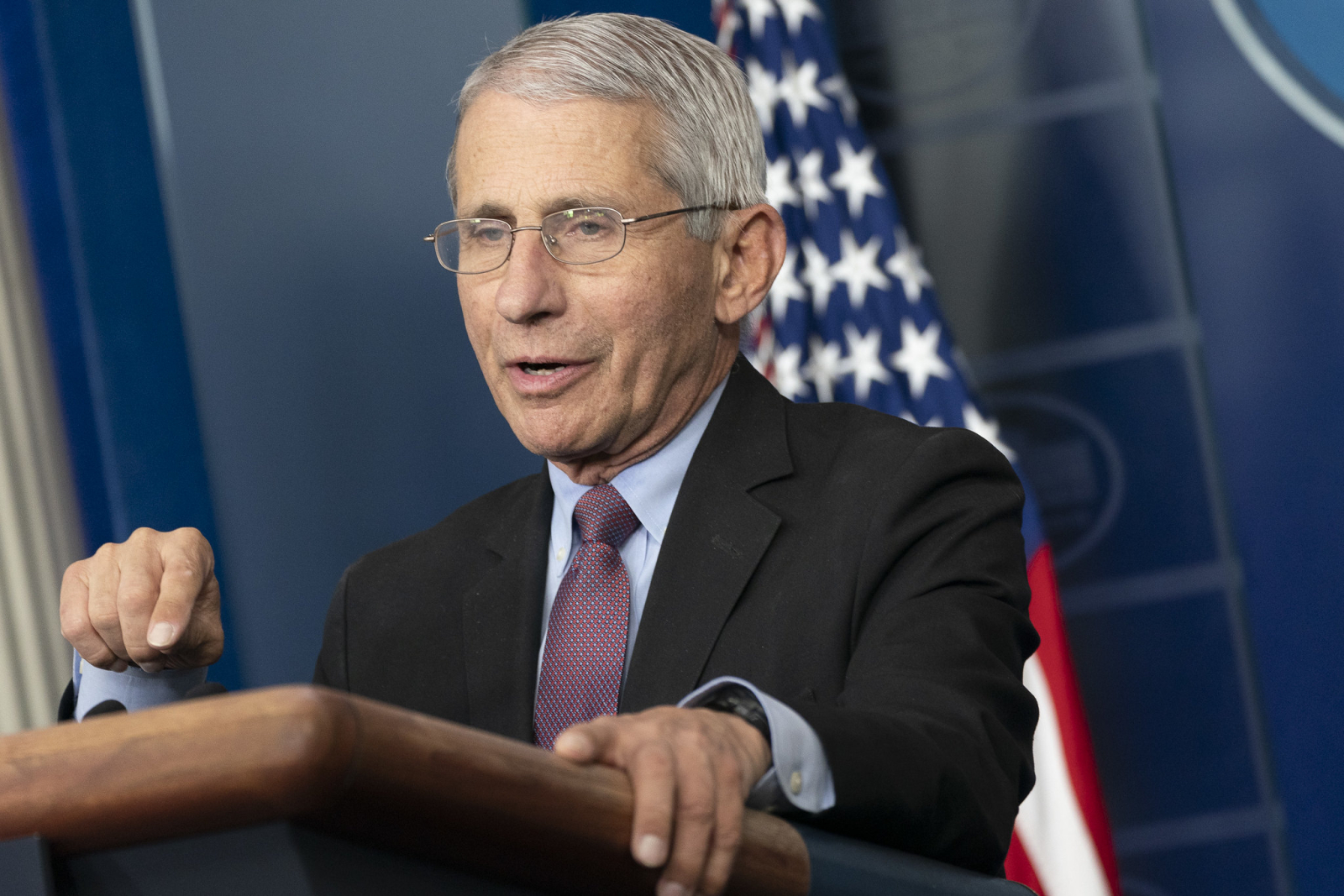 Anthony Fauci, director of the National Institute of Allergy and Infectious Diseases, during a White House briefing on April 22, 2020. White House photo by Shealah Craighead
Previous story
Next story

When Dr. Anthony Fauci went to the White House to discuss the AIDS crisis with Ronald Reagan, a friend told him something he would live by for the next 37 years.

“Every time you open the door of the West Wing, tell yourself: ‘This may be the last time I’m ever going to go in there — because I might have to tell the president something he doesn’t like, and I might not get asked back,’” Fauci told a Nobel Prize Summit panel on Tuesday, describing advice he took to heart decades ago.

“When you go in, saying, ‘Wow, I’m awestruck. This is a really amazing place, I want to get asked back’ — once you fall into that trap, you may compromise your integrity and start telling people happy talk, when really, you need to tell them the truth.”

Fauci, 80, the director of the U.S. National Institute of Allergy and Infectious Diseases at the National Institutes of Health, has advised seven American presidents, from Reagan to Joe Biden, on everything from HIV to Ebola to COVID-19. At one point, he was one of the world’s most frequently cited scientists, and has been called “America’s doctor.”

He appeared on a virtual panel April 27 alongside Nobel Prize laureates Jennifer Doudna, a biochemist known for developing CRISPR gene editing, and Peter Doherty, an Australian veterinary surgeon who has also worked in immunology, to talk about the pandemic and “solving problems with science.”

Analyst Laurie Garrett, the moderator, had asked Fauci about what lessons he could offer on that topic, particularly given his public corrections last year of former U.S. president Donald Trump’s lies about the pandemic — a position that led to death threats against him and which forced him to take on a security detail.

“How do we protect the mission of science as it goes into ever more controversial territory?” Garrett asked. Fauci said the most important thing was to maintain integrity and fidelity to what scientists have discovered.

“Sometimes the science leads to inconvenient truths that make people feel very uncomfortable,” he said, before reiterating the Reagan story. Fauci then said he had been fortunate to deal with presidents who respected where he was coming from, and invited him back to the White House anyway.

“So if I had gone in and given happy talk all the time, and didn’t stick by the science, I think likely they would have lost respect for me, and they wouldn’t have asked me back. So the lesson here is: Speak the truth.”

Sticking with science’s inconvenient truths, even if they rub politicians the wrong way, was a theme of the day, the second day in the three-day conference called “Our Planet, Our Future,” and featuring scientific, policy and business leaders focused on tackling climate change and inequality.

On the panel, Doherty spoke about how climate change will make catastrophic events like the pandemic more frequent, in particular as mosquito-borne diseases are able to move farther from the equator as the planet heats up.

He said action on climate change “threatens all sorts of economic imperatives,” and demands that humans significantly change their behaviour — something he said was harder than it seemed.

Dr. Anthony Fauci, who received death threats last year after he corrected Donald Trump’s pandemic lies, has a warning for scientists seduced by the proximity to power: Speak the truth, even if it's inconvenient for politicians to hear.

“The most difficult things for human beings to do is once they’ve gained what they’ve seen as an advantage is actually to give up on that — or even to contemplate giving up on that,” he said.

In recorded remarks, European Commission president Ursula von der Leyen told the summit to invest in scientific education to help the younger generation “understand the pandemic — how it started, and how we can stop it.”

“We must help them understand how our planet works, and how to save it, with climate education in every school,” said von der Leyen. “A widespread scientific culture is the only antidote against a mentality that sees conspiracies everywhere.”

When it comes to COVID, trust the experts, ignore the pretenders

Ford, Kenney, Moe, Pallister, and Horgan, should read this article and get on with bringing in provincial sick leave. It's what the medical scientist are telling them.

I totally agree with you.

I totally agree with you. The politicians mentioned above don’t seem to understand the dire consequences of ignoring that the scientific community is telling them. Half measures will not work. Lock downs, no matter how difficult they will be for businesses, are the only way forward in dealing with the pandemic.

Only 2 provinces have mandatory paid sick leave, so why single out these five? Grouping Horgan with the other four is defamatory.