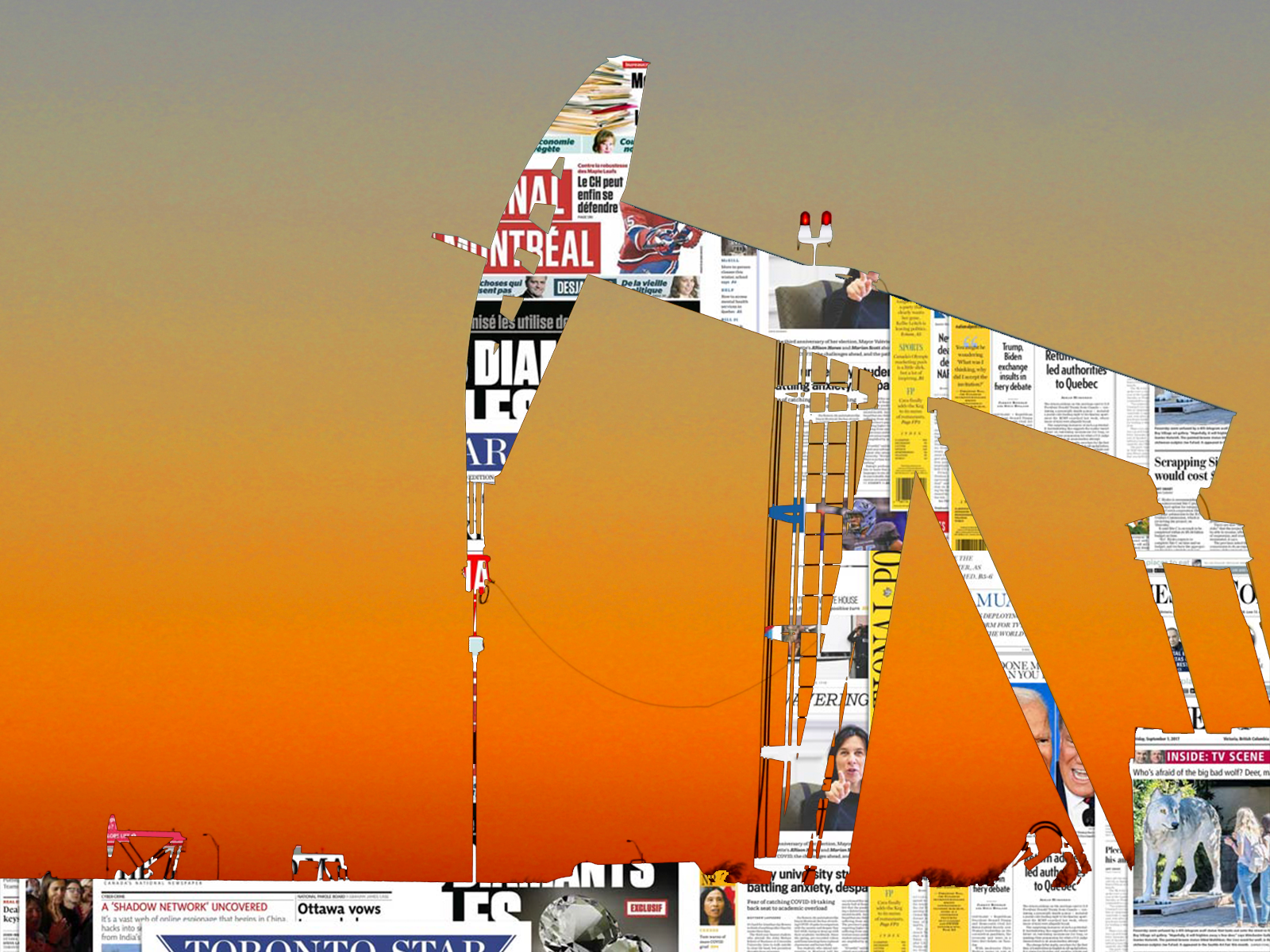 If Canadians want a conversation about energy and climate policy undistorted by Big Oil's outsized influence, newspapers still matter. Are they doing the job? Illustration by Hanna Araza
Previous story
Next story

We are living in a climate emergency. Canada's government admits that. But as Seth Klein has brilliantly shown in A Good War, provincial and federal policies fall far short of the scale of the challenge. One reason for Canada's laggardly climate policies is the economic, cultural and political power of the fossil fuel industries.

This two-part series considers an under-explored aspect of their power — their relationship with Canadian corporate media, particularly the Postmedia newspaper chain — and possible policy responses that could promote more independent "watchdog" journalism. (An extended version of the first article is scheduled for the May issue of the Canadian Centre for Policy Alternatives' Monitor magazine.)

That list should also include some of Canada's newspaper-owning corporations.

Why newspapers? After all, their business model is collapsing and newsrooms shrinking as audiences and advertising migrate online. Yet as researcher Marc Edge argues, reports of their death are "greatly exaggerated." Newspaper revenues still exceed their operating expenses, and they retain residual prestige. They originate much of the news, help set public agendas, and are branching heavily into digital operations.

If Canadians want a conversation about energy and climate policy undistorted by Big Oil's outsized influence, newspapers still matter. Are they doing the job?

Saskatchewan law professor Jason MacLean analyzed reportage and commentary on the Trans Mountain pipeline expansion (TMX) in the Globe and Mail — widely regarded as Canada's "newspaper of record." MacLean found that fossil fuel industries have essentially captured the Globe's framing of TMX as in "the public interest," with the "regrettable result" of legitimizing "climate policy inaction in Canada." Critical articles sometimes appear, but they are disconnected from the sustained pro-industry commentary.

Postmedia's pro-petro position is most evident in its carbon-coddling conservative columnists (as distinct from its professional reporters). Ideologues like Stewart Muir, Terence Corcoran, John Ivison, Claudia Cattaneo (described by energy journalist Markham Hislop as "the attack dog for a certain segment of the Alberta oilpatch"), and a dozen others extend their influence beyond the printed page. Researcher Bob Neubauer found that of the top-10 mainstream media outlets whose opinion articles were most often cited in Facebook posts by six prominent online pro-petro groups, all but one (the Globe and Mail) were Postmedia dailies.

"Their opinion pieces and uncritical industry reporting are a major source of content for the social media feeds of pro-oil advocates, who recirculate this content to legitimize their own talking points," Neubauer said in an emailed response.

"Moreover, accessing 'legacy media' is a common use of social media for many Canadians, especially on Facebook. Thus, legacy media are still very important, even if their modes of content circulation have changed."

Journalists, even widely read columnists, don't work in a vacuum. To survive, newspapers need to meet political and/or economic objectives as interpreted and enforced by management and ownership through key decisions about resource allocation, marketing strategies, news work routines, and hiring.

Postmedia emerged from previous owner Canwest's ill-fated gamble on multimedia "convergence" between broadcast, print and digital media. The papers were bought at bargain prices by its creditors with U.S. hedge fund backing. Since 2016, Chatham Asset Management has held about 66 per cent ownership, a company with an 80 per cent stake in American Media Inc., controversial for its ties to former U.S. president Donald Trump.

In effect, Postmedia is a revenue conduit for the U.S. hedge funds, which receive loan repayments at a high rate of interest. Postmedia circumvents the Canadian tax laws intended to preclude foreign ownership of Canadian media by limiting U.S.-held shares to 49.9 per cent of the votes in shareholder matters — an end run that was approved by Stephen Harper's Conservative government. Postmedia dailies' operating revenues exceed expenses — but at the cost of cutbacks that arguably reduce its asset value. Growing digital revenues have not offset declining revenues from print circulation and advertising.

Is Postmedia's petro-friendliness driven by economic considerations? Phyllise Gelfand, vice-president of communications, declined to comment on the company's strategic direction, but in an emailed response said, "We will continue to do our part engaging audiences, producing compelling content and advocating for a level playing field for the Canadian media industry against international digital media giants."

Given Postmedia's pursuit of digital revenues, Ethan Cox sees the columnists' extremism as "rage-bait" intended to provoke readers to "hate-click" on their articles.

Another speculation focuses on "sponsored content" — articles, resembling regular news, generated by journalists but paid for by advertisers who control or approve the product. That gambit is part of a broader trend in corporate print media, but it may point to a specific symbiosis in the case of revenue-hungry Postmedia and Big Oil, a wealthy industry with public image problems and a need to reach decision-makers and publics. Postmedia can offer a "trusted brand" and prestige that Facebook can't provide.

Indeed, in 2014, the Vancouver Observer disclosed a proposed partnership between Postmedia and the Canadian Association of Petroleum Producers (CAPP) to "bring energy to the forefront of our national conversation" and "link Postmedia's sponsored energy content with CAPP's 'thought leadership.'" The proposal suggested "topics to be directed by CAPP and written by Postmedia" in a series of 12 single-page "joint ventures" in the National Post and other major newspapers.

However, there is little evidence that this relationship continued regularly. Around 2016, the industry shifted its PR gears, mobilizing its own "natural" constituency — its employees and resource communities — through weaponizing social media and supporting grassroots engagement.

But the industry still sees newspapers as important in shaping the narrative, and Postmedia appears to be a particularly reliable partner. Postmedia's relationship with the Canadian Taxpayers Federation (CTF), as reported in 2016, provides an apparent model. CTF supplied bountiful free op-ed articles — an information subsidy — that reflected its agenda; in return, CTF accessed the chain's large print and digital readership.

Similarly, while social media and CAPP's own publications reach its core constituency, op-ed articles and "earned media" in the press help CAPP reach general audiences. Earned (unpaid) media eases the pressure on advertising budgets, which had declined along with oil revenues. Our online searches indicate that between 2016 and 2020, Postmedia published at least 19 articles by CAPP CEO Tim McMillan, and several by other CAPP directors or executives. CAPP appears to find a higher chance of editorial acceptance and a more receptive readership in Postmedia papers compared to other outlets.

A right-wing political stance is also about market positioning. Postmedia's National Post was launched in 1998 by Conrad Black as a flagship for thoughtful conservatism, which in Canada often means neoliberalism marinated in oil. In 2013, then-publisher Douglas Kelley described his paper as “one of the country’s leading voices on the importance of energy to Canada's business," promising to "leverage all means editorially, technically and creatively to further this critical conversation" and to "work with CAPP to amplify (our) energy mandate." Energy mandate, not journalism?

In 2019, Postmedia ownership promoted Kevin Libin, one of the chain's most conservative editorial voices, to "executive editor of politics." His reported mission is "to oversee … political reporting and certain commentary published across Postmedia's newspapers" and to move the chain even more reliably to the right — a strategy requiring an unprecedented centralization of political coverage. Some observers interpret the move as a business decision to "capture the mainstream conservative audience segment while competitors fight for other pieces of the pie."

The conservative stance reflects management's own politics, as well. While just one of Postmedia's board directors (Wendy Henkelman) has direct links to Big Oil, most of the others have experience in other private-sector corporations, according to their online biographies.

Several have connections to conservative parties. Janet Ecker was a senior cabinet minister under two Ontario Tory premiers, and a fellow at the neoliberal C.D. Howe Institute. Ex-CEO Paul Godfrey is a long-standing and active Conservative. Alongside Postmedia's previous board chair, Rod Phillips, Godfrey held a $1,000-a-head fundraiser for the Ontario party in 2019. Phillips was finance minister in Premier Doug Ford's cabinet until his COVID-19 advisory-breaking Caribbean vacation.

In short, Postmedia and Big Oil share an agenda around institutional legitimacy, political influence, and economic interests. Their relationship is often personal and informal, anchored in a shared ideology in a polarized political environment. The result? Journalism that treats Big Oil with kid gloves, and environmentalists and climate scientists with hostility.

But that's a symptom of a larger problem, with implications for the race against climate change: Profit-oriented corporate control, insufficient resources for independent investigative journalism, and lack of ideological diversity in Canada's press.

Robert Hackett, contributing columnist, is professor emeritus, and Hanna Araza a graduate, of the School of Communication at Simon Fraser University.

Research for this article was supported by the Corporate Mapping Project, a research and public engagement project investigating the power of the fossil fuel industry in Western Canada led by the University of Victoria, the Canadian Centre for Policy Alternatives (B.C. and Saskatchewan offices) and Parkland Institute. This research is supported by the Social Science and Humanities Research Council of Canada.

Thank you for this. I

Thank you for this. I attended a lecture at UVic a couple of years ago on the Corporate Mapping Project- very revealing.
I'm also disappointed in the CBC, our public news media, especially CBC television. It's rare that they will carry stories about Climate Change and the need to get off fossil fuels. They won't touch fracking and the problems it's causing. When they do cover these topics, the reporting is very superficial.

Thank you to the National Observer for your investigative journalism. But these stories need to get out into the mainstream...

The Observer itself drew

In 2019, The Observer published several op-eds by Sandy Garossino embracing new export pipelines and Trudeau's plan to fail on climate:
Garossino: "There's an extraordinarily compelling case to be made for Trudeau's climate plan, and how the TMX pipeline fits into the bigger picture."
Garossino: "It was always going to be a tough slog for Rachel Notley to be re-elected. Yet had more environmentalists supported her bargain of a pipeline in exchange for a sweeping series of carbon concessions, Canada's climate plan might not be in such dire shape today. The costs of making the perfect the enemy of the good might be a lesson to remember come the federal election."
"Jason Kenney's shrewd canard"
www.nationalobserver.com/2019/04/25/opinion/jason-kenneys-shrewd-canard

Environmentalists don't demand perfection. What they demand is science-based policy — not fraudulent climate plans drawn up by Big Oil. Notley's (i.e., Big Oil's) climate plan will push us over the climate cliff.
Exposing readers to a variety of opinions is important, but this does not mean The Observer should publish disinformation, revisionist history, and falsehoods.
There was not a shred of truth to Garossino's ill-informed narrative. Her fairy tale was worthy of Postmedia scribes. She had the story exactly backwards.
Garossino's narrative, echoed by journalistic luminaries at the National Post, no doubt confused Observer readers and weakened their resolve to oppose pipelines and call for climate action.
Not what this reader signed up for.