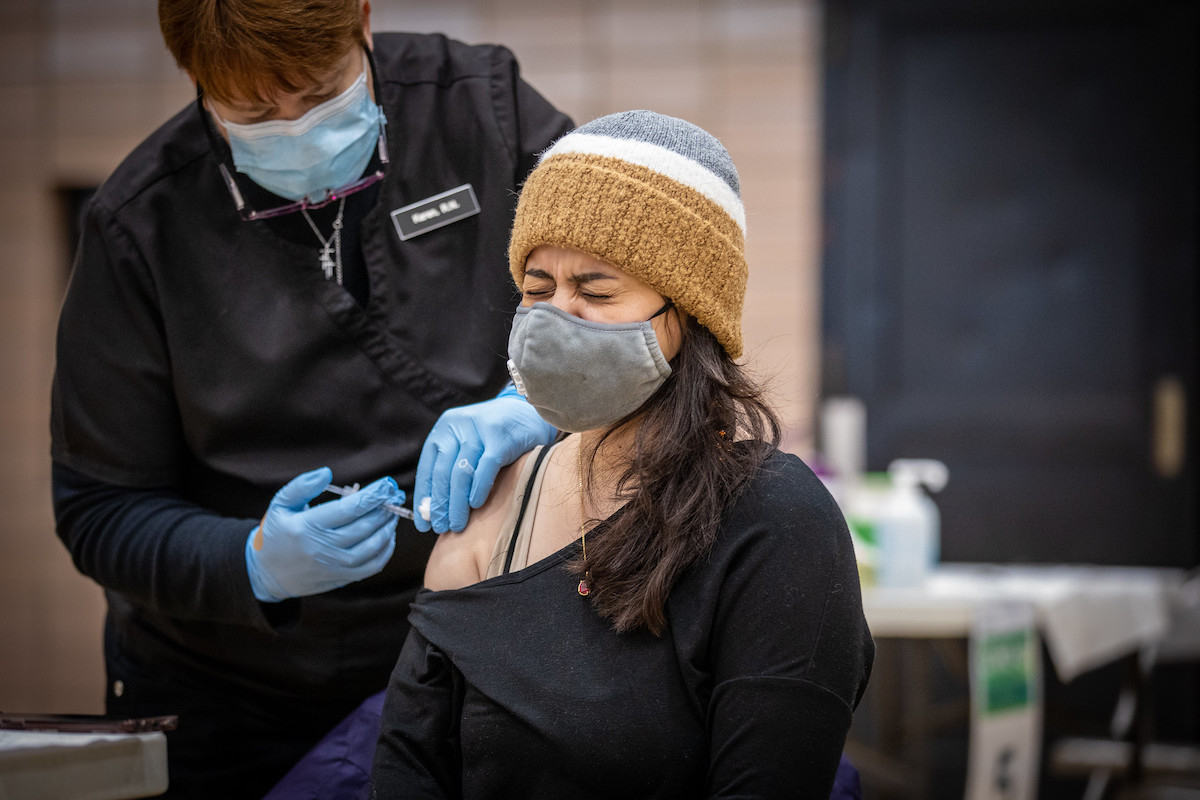 Even at the best of times, mixed messaging on COVID-19 vaccines is problematic. Photo by Phil Roeder / Flickr (CC BY 2.0)
Previous story
Next story

For months, the doctors and public health experts at Canada’s National Advisory Committee on Immunization (NACI) were clear: take the first vaccine you’re offered. But now, in the wake of new data about an extremely rare complication called vaccine-induced immune thrombotic thrombocytopenia — blood clotting, essentially — those experts have changed their tune.

Instead of getting the first jab that’s available, they now advise Canadians to wait for an mRNA vaccine from Pfizer or Moderna if they can, and if they live in a place where COVID case counts are low enough that waiting isn’t dangerous. “This needs to be an informed consent,” NACI chair Dr. Caroline Quach-Thanh said during an appearance on CTV’s Power Play. “If, for instance, my sister was to get the AstraZeneca vaccine and die of a thrombosis when I know that it could have been prevented and she’s not in a high-risk area, I’m not sure I could live with it.”

Even at the best of times, this mixed messaging would be problematic. But introducing it into an information ecosystem that’s rife with bad-faith actors and conspiracy theorists, when a growing number of people seem to get their medical information from Dr. Facebook or Dr. Twitter, is a recipe for disaster. Vaccine hesitancy was already a major problem, one made worse by the ever-thickening online stew of false information and flagrant conspiracy theories. Now, thanks to NACI’s decision, it may be about to become a full-blown crisis.

Not surprisingly, the usual suspects are more than happy to help here. On Wednesday, in the wake of the Ontario government’s decision to suspend the use of AstraZeneca as a first dose, Toronto Sun columnist Joe Warmington tweeted that while he’s heard “so many mean things” about anti-mask politicians like Derek Sloan, Randy Hillier and Maxime Bernier, “none of them pushed a dangerous vaccine that has now been halted.” He even depicted those who had already received the AstraZeneca vaccine as victims, arguing that “apology must go to the people told they should take the first vaccine offered to them.”

Nobody should expect an apology for being given a highly effective vaccine for free, much less one that was developed, tested and produced in under a year. The AstraZeneca vaccine is a miracle of modern science, and we should all be grateful to the scientists who developed it. But those scientists need to better understand that the general public isn’t nearly as good at understanding risk and probability calculations as they are. The very fact that people are more worried about the dangers of a blood clot that has a one-in-55,000 chance of happening than they are of crossing the street or getting into their own cars speaks to that lack of understanding.

The study of risk, and the struggles that most people have with processing it effectively, is not new. As Bruce Schneier wrote for Wired more than a decade ago, “we have two systems for reacting to risk — a primitive intuitive system and a more advanced analytic system — and they're operating in parallel. It's hard for the neocortex to contradict the amygdala.”

In other words, in a competition between our rational brains and our more basic fears about survival, death and danger, the rational part is at a structural disadvantage. That’s before layering on a year’s worth of pandemic fatigue and a political environment in which basic scientific information can become polarized and weaponized.

As we saw with Dr. Quach-Thanh’s comments, even scientists sometimes struggle when thinking about risk. In a Globe and Mail op-ed, six Canadian economists made a valiant effort to douse the flames of misinformation lit by the updated vaccine guidance. They maintain NACI missed the forest for the trees with its own assessment of the risk profile for AstraZeneca’s COVID vaccine. “Analysis focused solely on private risks and private rewards, while useful for individual decision-making, ignores the important public-health benefit of vaccination — or, for economists like us, the positive externality — which is to protect others, not just ourselves.”

Even if we successfully immunize our way out of COVID-19, which is far from certain right now, there will be future pandemics and diseases that require people to trust doctors and scientists. And while that trust is informed by their expertise, it’s also a function of their ability to deliver clear and effective messaging. “I appreciate the nuanced arguments that everybody's putting forward but that's asking an awful lot of a lot of people that are looking for some very clear direction,” bioethicist Kerry Bowman told CP24. ”We've really wobbled back and forth and we're gonna pay quite a price for it on this front of vaccine hesitancy.”

Even at the best of times, mixed messaging is problematic. But introducing it into an information ecosystem that’s rife with bad-faith actors and conspiracy theorists is a recipe for disaster, writes columnist @maxfawcett. #COVID #vaccines

That, more than anything else, is the real risk here. By creating confusion and controversy around the AstraZeneca vaccine, the scientists at NACI may end up undermining the case for listening to experts like them in the future. Now, we’ll have to wait and see whether their well-meaning decision ends up laying the blacktop for a new road to vaccine hesitancy hell or merely serves as a detour along the way to herd immunity.

Looks like the NACI are advisors to Public Health, not the CTV audience. NACI has a role to play and should stay in their own lane.
We won’t get out of this pandemic if they are going to have free reign to undermine public health policy:

In addition to burden of disease and vaccine characteristics, as of 2019, PHAC has expanded the mandate of NACI to include the consideration of programmatic factors in developing evidence-based recommendations to facilitate timely decision-making for publicly funded vaccine programs at provincial and territorial levels.

The additional factors to be considered by NACI include: economics, ethics, equity, feasibility, and acceptability. Not all NACI Statements will require in-depth analyses of all programmatic factors.

1 in 50,000 isn't exactly extremely rare.
Let's understand that if every Canadian had that particular vaccine, that'd amount to 740 cases.

I am 85 years old. I do not believe that we, as Canadians, and personally as a person born and living in Quebec, that we have ever had a Public HEALTH Policy. What I have witnessed has been a Public DISEASE Policy governed by politics. On the subject of vaccines: I have a very solid immune system which I have been nurturing and trusting for 85 years. I am not about to get an injection of DNA altering chemicals to mess up my immune system - which has kept me healty and disease free all these 85 years. I do not consume any medication (pills or other substances) and am not about to start now. I did get the "asiatic flu" in 1957, while pregnant with my first child. My partner and I were in bed with high fever for two days, slowly got back on our feet within the next three days and were both back at work and perfectly cured the following week - all this without consulting and only with the help of aspirin. Getting injected should remain a personal choice - and by personal I also mean private. I also do not appreciate seeing a strongly biased message such as Mr. Max's in my National Observer.