Why is this man raising bugs in his living room? Food security 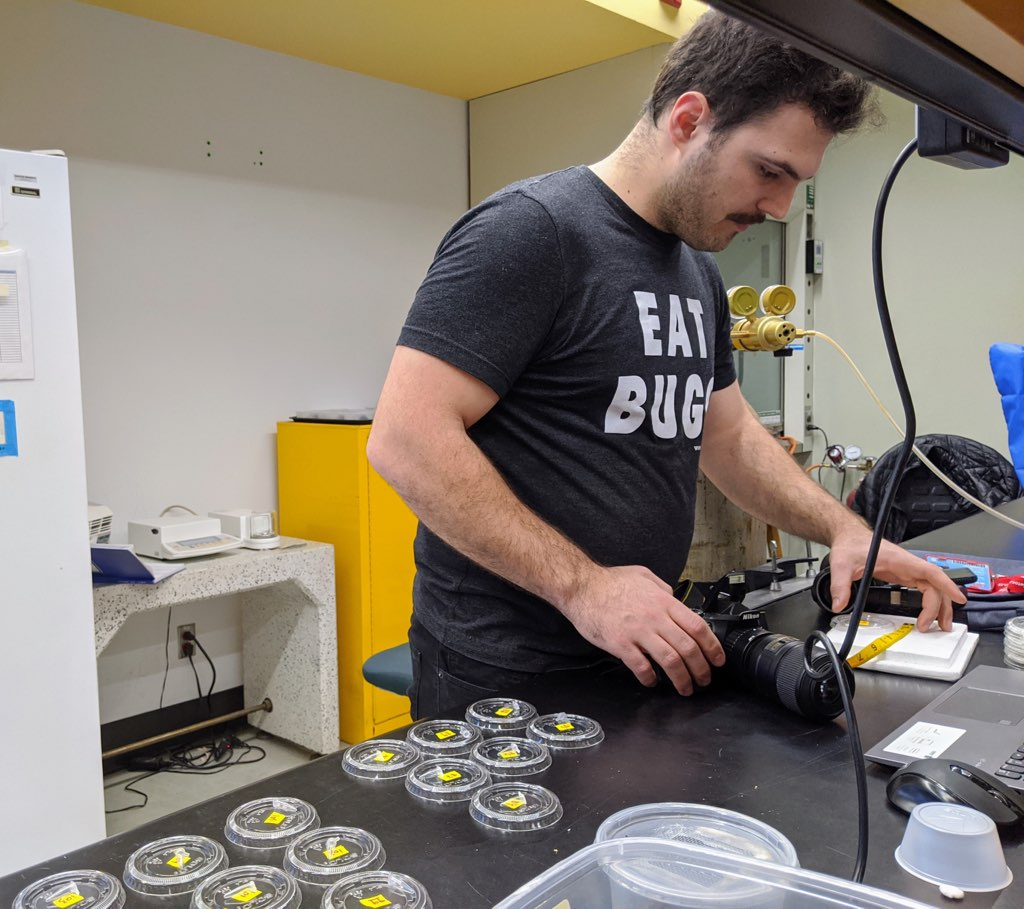 Matt Muzzatti has been raising crickets in his living room, searching for the optimal diet to increase their size. Photo provided by Matt Muzzatti
Previous story
Next story

The first batch of baby crickets moved into Matt Muzzatti's living room when the pandemic hit last year, and he’s been adding more ever since.

"A lot of people think that it would be really noisy, but crickets don't start chirping until they reach adulthood... and my one 'lab assistant' — (my) cat — was pretty good at catching escapees," said Muzzatti, a Carleton University PhD student who is studying how to grow larger crickets for the fast-growing insect protein industry. With his on-campus lab closed, bringing the incubator-dwelling bugs home was the only option.

Crickets and other bugs — long vital and well-loved foods for people worldwide — are becoming increasingly popular in North America and Europe. Chefs like Vancouver's Vikram Vij and New York City's Joseph Yoon have highlighted their gastronomic value as crunchy snacks, flour alternatives and sushi or pizza ingredients. In 2013, an FAO report noted that insects have "huge potential" for sustainably enhancing global food security. And financial analysts expect the global insect market will reach $5.5 billion by 2027.

"By 2050, our global population is expected to reach around 10 billion, but our current agricultural model is not really positioned to feed this many people," said Muzzatti. "Insect feed and food is one potential solution to help mitigate this problem."

Food accounts for between 21 and 37 per cent of global greenhouse gas emissions, according to a 2018 UN report on land use, agriculture and climate change. The report urged countries — including Canada — to adopt more sustainable farming practices to keep planetary warming below the 1.5 C Paris Agreement threshold.

Crickets and other insects take far less water, time and space to rear than other meats, like poultry or beef, Muzzatti explained. They're also more efficient at transforming food into protein than conventional sources of animal protein and can subsist on otherwise wasted food or manure, the 2013 FAO report noted.

Yet despite their dietary flexibility, not all cricket foods are created equal.

"Every single species has... an optimal amount of each type of nutrient to make sure they're growing and healthy. I'm trying to tease that out for the species we're working with," explained Muzzatti, who's currently growing banded crickets, the most common cricket species raised for human consumption. He is conducting his work in partnership with Entomo Farms, Canada's primary cricket farm.

The insects are omnivores and need both plant and animal food to thrive. For the past year, Muzzatti has been feeding his crickets different diets — usually a mix of grains and vegetables — trying to find what prompted the most growth.

"I like to encourage people to keep an open mind, and really, there's so many possibilities with edible insects — the only limitation is our imagination," said Joseph Yoon of @Brooklynbugs17. #FoodSecurity

So far, he's found one cricket superfood: Royal jelly, a honeybee secretion reserved to feed queen bees. Female crickets fed a diet of grains, vegetables and royal jelly grew larger and produced about 66 per cent more eggs than their conventionally fed peers. That boost in size could prove useful, he said, making it easier to raise more crickets without increasing the amount of labour needed to tend to them.

Still, making bigger crickets is only one of many hurdles to clear before eating insects becomes more widespread in places where they've been historically looked down on, like Canada and the U.S.

"One of the biggest challenges is that insects do not taste like chicken," said Joseph Yoon, a chef and owner of Brooklyn Bugs, a New York City-based organization raising the profile of edible insects. Because insects are gastronomically unlike the protein sources familiar to most North Americans — chicken, beef, salmon — it can be tricky for people to integrate them into their diets, he said.

For centuries, Eurocentric writers and scientists have framed eating insects as something "for poor developing nations or the apocalypse," said Yoon. That had a profound effect on their acceptance in North America and Europe, where they have historically been seen as inedible, particularly by European settlers and their descendants.

They're missing out: The FAO estimates that insects are part of at least two billion people's traditional diets worldwide. With roughly 1,900 edible insect species on the planet, there's no lack of gastronomic choice.

"We're living through a pandemic right now, we're going through extreme climate change," said Yoon. "We're already going through cataclysmic changes in the world, so at what point do we need to disrupt the system and think about how we can make these positive changes?"

Eating more insects alone won't be enough to make the world's food sustainable, however. In its 2017 book, the Nordic Food Lab, a Copenhagen-based interdisciplinary sustainable food research group, points out that how we produce and distribute food — not what the ingredient is — is the problem. Insects won't be any more sustainable than soy, a crop heralded as the key to sustainably feeding the world in the 1960s and 1970s.

Now, soy is now a leading commodity crop grown on an industrial scale and responsible for massive deforestation, pollution and other problems worldwide. Most soy grown now goes to industrial food production or animal feed — and the FAO and others have proposed insects as a sustainable alternative to products like soy or fishmeal for both purposes.

"Where and when specific insects can help cultivate more diverse, resilient local and regional food systems, (raising insects) may be an idea worth pursuing, for the same reason we should investigate the edible potential of our entire surroundings, wherever we live in the world," the authors note.

"I like to encourage people to keep an open mind, and really, there's so many possibilities with edible insects — the only limitation is our imagination," he said.