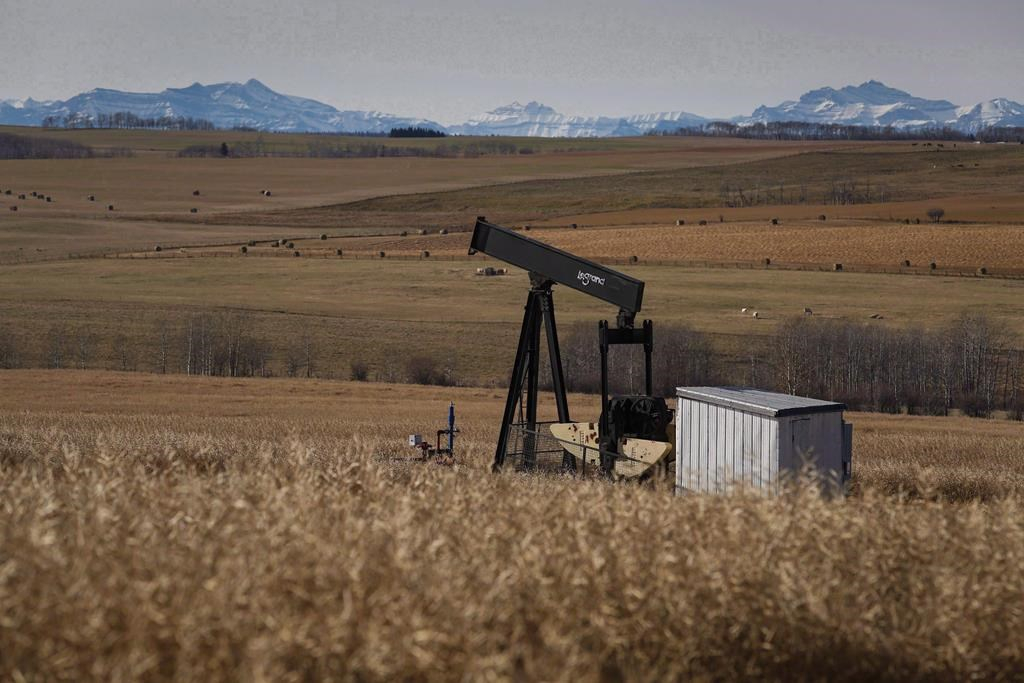 A new report from the University of Calgary says the costs of Alberta's growing stock of abandoned and inactive oil and gas wells are falling unfairly on landowners and taxpayers. Photo by Jeff McIntosh / The Canadian Press
Previous story
Next story

CALGARY — The costs of Alberta's growing stock of abandoned and inactive oil and gas wells are falling unfairly on landowners and taxpayers, says a report from the University of Calgary.

“Landowners have been left behind,” said Braeden Larson of the university's School of Public Policy. “Landowners got the short end of these burdens that have popped up with the number of wells that have grown in this crisis.”

Larson and co-author Victoria Goodday use industry and government data as well as previous research to point to troubling trends in Alberta's beleaguered conventional oilpatch.

More than half of Alberta's wells no longer produce oil and gas, but haven't been cleaned up. That includes 97,000 wells that haven't been properly closed and another 71,000 that have been closed but not reclaimed.

And the pace of abandonment is accelerating.

More than half have been inactive for more than a decade and even relatively new wells, once closed, have less than a one-in-five chance of being reactivated.

More and more are simply deserted. Over the last six years, the number of orphan wells has quintupled, the report says.

Many companies have stopped paying rent to landowners, the paper says. Almost always, the public picks up the tab.

In 2018, the Surface Rights Board, which adjudicates disputes between landowners and energy companies, ordered $6.4 million in payments from general revenue. In 2014, the tab was less than a tenth that.

Over the last six years, the number of orphan wells has quintupled, according to a new report from the University of Calgary. #AbandonedWells #OilAndGas #Alberta

“(It's) sometimes one or two years before a landowner can even put their case before the Surface Rights Board,” Larson said.

Rural Municipalities Alberta says the amount of outstanding property taxes from the oilpatch has tripled since 2019 to $245 million.

The impact of abandoned or inactive wells on property values has never been calculated, the report says.

The burdens are not only financial.

The province's energy regulator has found that about 10 per cent of inactive wells and seven per cent of abandoned wells leak. Farmers and ranchers complain about poor weed control contaminating their crops and pastures.

The government is bringing in new rules this year to ensure companies taking over old wells have the resources to remediate them, she said.

“The new framework will begin to shrink the inventory of inactive and orphaned wells across the province, accelerating the timely restoration of land.”

“Accelerating the decommissioning and reclamation of inactive wells and associated sites remains a priority for our industry.”

The province has increased its loan to the industry-funded group that deals with orphan wells, Henshaw said.

It has directed $375 million in federal money to close wells, pipelines and other facilities. And the regulator has brought in new programs to encourage companies to work together to close groups of wells.

Those programs are helpful, the report says. But they tend to favour industry by encouraging spending in areas where the most wells can be cleaned up, instead of targeting the most hazardous wells or those that have been idle the longest.

“Some landowners who may have had their well sitting on their land for a significant amount of time may be passed over,” Larson said. “It's a side-effect.”

Larson recommended more research on the costs as well as policy changes, including bringing in time limits for companies to clean up their wells, as is done in other jurisdictions.

“Past legislation and legislators couldn't see a future where the number of inactive and orphan wells would become such an overwhelming crisis,” Larson said. “It's now an opportunity that we have a chance to focus on solutions.”

That's an understatement, said Regan Boychuk of the Alberta Liabilities Disclosure Project, an independent group that has studied the issue for years.

“A year ago, before COVID, rural Alberta was on fire (over the issue). Landowners were threatening sabotage.”

He points out that the report estimates the total liability from unremediated wells at $338 million. Estimates from the regulator, which include other energy facilities such as pipelines, put the number anywhere between $58 billion and $260 billion.

“This industry can't repay its mortgage. If the people operating this stuff don't have the resources to clean it up, they shouldn't be operating it.”