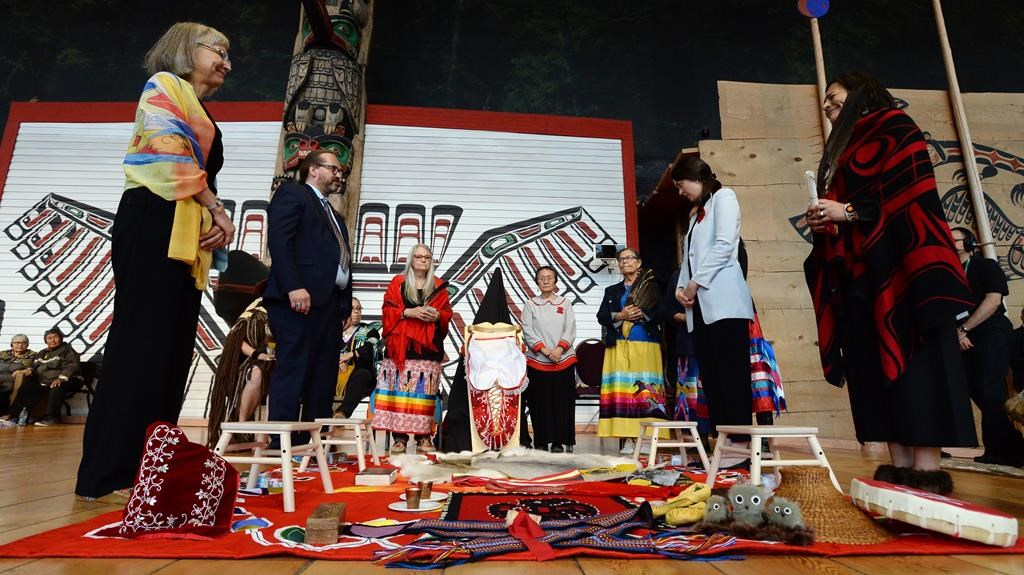 Chief commissioner Marion Buller, front left to right, commissioners Brian Eyolfson, Qajaq Robinson and Michele Audette get ready to prepare the final report to give to the government on June 3, 2019. Photo by: The Canadian Press/Adrian Wyld
Previous story
Next story

OTTAWA — Meeka Kakudluk says she considers herself one of the lucky ones.

As the Inuit elder lit a traditional oil qulliq lamp while offering an opening prayer for a ceremony launching a national action plan to address the heinous tragedy of missing and murdered Indigenous women and girls in Canada, Kakudluk reflected on the more than 4,000 lost lives.

She also spoke of the 215 children whose remains are believed to be in an unmarked burial site located at a former residential school in Kamloops, B.C.

"I'm here today. I survived the residential school … They never made it home. So this light is going to them. This light will heal them and this light will take them where they want to be."

Her prayer, and its theme of taking those first steps toward healing, was a poignant encapsulation of a day marking what many called the beginning steps toward meeting the goals of the National Inquiry into Missing and Murdered Indigenous Women and Girls.

The plan released Thursday — the second anniversary of the inquiry's final report — was branded as the long-promised "national action plan." However, the document is something of a preliminary framework that some Indigenous leaders said fell short of the urgent action needed.

Prime Minister Justin Trudeau called it a plan that will evolve with more detailed measures over time, with the aim of stopping violence against Indigenous women, girls and 2SLGBTQQIA+ people.

Trudeau also reiterated that he accepted the inquiry's findings, including "that what happened amounts to genocide."

A large group of partners, including the families of victims and survivors, distinct Indigenous groups and provincial, territorial and federal governments, developed the national action plan.

Many Indigenous leaders and members of the National Family and Survivors Circle spoke hopefully about the large volume of documents released Thursday, expressing support for the inclusion of individual plans proposed by a plethora of Indigenous and non-Indigenous governments and groups.

But not everyone felt it was the national action plan they were hoping to see.

The plan released Thursday — two years after the #MMIWG inquiry's final report — was branded as the long-promised "national action plan." But the document is something of a preliminary framework that some Indigenous leaders said fell short.

Representatives from some Indigenous women's groups and advocates denounced the whole process, noting that an implementation plan has yet to be developed and calling the numerous individual plans "fragmented."

"We were looking for and expecting concrete actions with responsibilities assigned, timelines and resource allocations. That is not what we see here," said Shelagh Day from the Feminist Alliance for International Action.

"This plan says it's the first step. Can you imagine two years after the national inquiry that this is a first step?" she said.

Palmater especially took issue with officials calling it an "evergreen" document that will continue to be developed.

"The last thing I want to hear in this country is that we have evergreen genocide. Because that means there is no target end date, no measuring. I want the genocide to end now."

As part of the documents released Thursday, a "federal pathway" outlines Ottawa's planned steps to address the inquiry's sweeping 231 calls to justice.

Ottawa says it will re-establish the Law Commission of Canada — an independent federal agency to advise Parliament on how to modernize and improve Canada's laws, defunded by Stephen Harper's Conservative government in 2006.

The federal government is also pledging to invest in research and data collection, including establishing national standards for missing persons reports and improving disaggregated data to address the overrepresentation of Indigenous people in the criminal justice system.

Ottawa proposes to support the advancement of "Joyce's principle" — an initiative named for Joyce Echaquan, a 37-year-old mother of seven children who died at a Quebec hospital after suffering degrading insults from staff.

To address safety and security concerns for Indigenous women, the government says a comprehensive strategy for dealing with the impacts of temporary work camps located close to Indigenous communities is needed, although a such a strategy is not promised.

Instead, federal efforts will be aimed at co-developing a variety of activities aimed at mitigating the impacts of these camps and worker influxes.

To preserve and support Indigenous culture, Ottawa is promising support for initiatives such as language and culture camps, mentor-apprentice programs and Indigenous language resources and documentation.

Many of Ottawa's proposed initiatives are general in nature and none have any dollar figures or allocations attached except an overall commitment of $2.2 billion over five years, citing the need to co-develop these actions with Indigenous communities.

But the government says it will establish performance indicators and prepare annual reports to measure progress starting next fiscal year.

The overall document that includes the plans of other governments and partners acknowledges it is mainly laying the foundation for more detailed and costed steps to come at an unidentified later date.

But it does include seven immediate next steps that all partners have agreed to prioritize, including funding for support services for survivors and family members, a public education campaign on the lived experiences of Indigenous people and a Missing and Murdered Indigenous Women and Girls table that will co-ordinate intergovernmental collaboration.

Earlier this week, the Native Women's Association of Canada said it had walked away from working on this plan, citing a "fundamentally flawed" and politically motivated process to draft it.

Instead, NWAC released its own action plan, which, unlike the one being released Thursday, has targeted measures with reporting mechanisms and $29 million in detailed costs attached.

Crown-Indigenous Relations Minister Carolyn Bennett acknowledged the work of NWAC as instrumental in pushing for the national inquiry to come to fruition.

She defended the plan as one that was developed in the spirit of trying to be as inclusive as possible and pledged that "implementation starts tomorrow."

"This was the first-ever national inquiry, it required all provinces and territories and Indigenous governments to come together to develop a plan, so the common elements are in the national action plan now," Bennett said in an interview.

"You have to have a plan before you can begin to implement it and determine its effectiveness and accountability. But this consensus document done by these extraordinarily inspiring people is, for sure, the imperative first as we all look forward to the implementation."

This report by The Canadian Press was first published June 3, 2021.

'Nothing has changed:' Tina Fontaine's body pulled from river five years ago