Why a rural Minnesota pipeline is a climate battleground 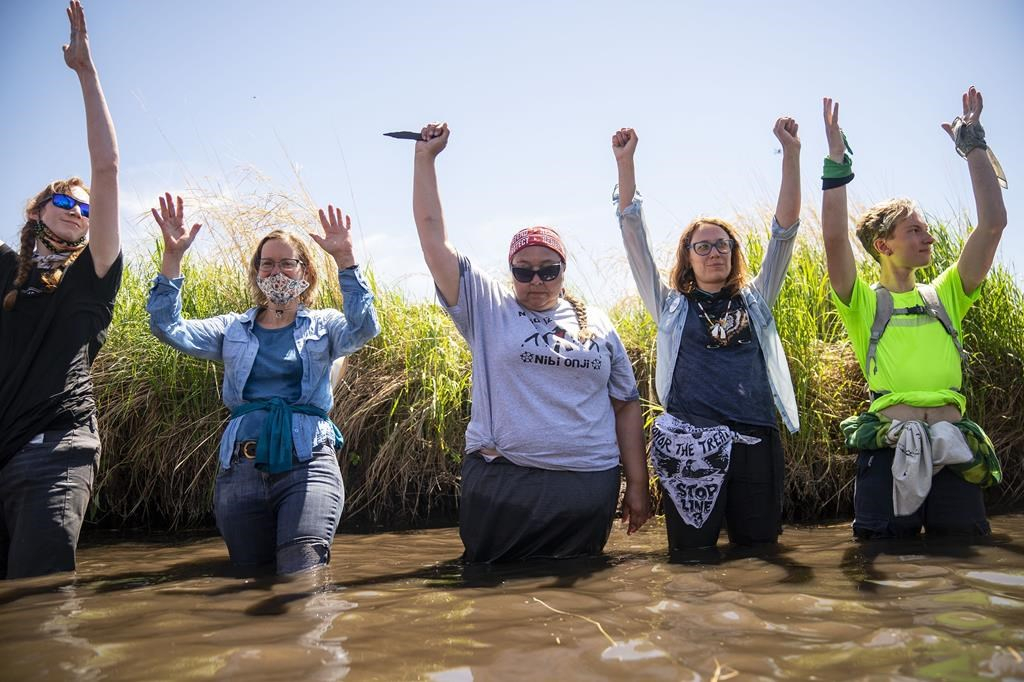 As Enbridge Energy prepares to finish rebuilding an oil pipeline across rural northern Minnesota, protesters are occupying part of the construction area and pledging a “summer of resistance” on the ground and in court.

Enbridge, which has obtained all necessary state and federal permits for the Line 3 project, says it will be finished by year's end.

The Canadian company describes it as essential for reliable oil supplies in both nations, saying the plan has undergone rigorous environmental permitting and will boost Minnesota's economy. Opponents contend it endangers waterways, violates Indigenous treaty rights and abets dependence on fossil fuels that will further overheat the planet.

What's beyond dispute is that the project fits into an escalating battle over the future of energy pipelines, which federal regulators say are generally safer than hauling fuels by rail or highway but pose their own hazards, particularly spills in ecologically sensitive places.

WHAT IS THE LINE 3 PROJECT?

The 1,765-kilometre line is part of an Enbridge network that moves oil from fields in Alberta to refineries in southern Ontario and the U.S. Midwest. It crosses the far northeastern tip of North Dakota, then cuts through northern Minnesota to a terminal at Superior, Wis.

The line carries nearly 62 million litres of oil used in fuels and other products.

Enbridge says the original 1960s pipe is deteriorating and carrying about half its capacity. The company is replacing it with pipe made of stronger steel that it says would enable resumption of a normal flow — about 121 million litres daily.

Work is finished in Canada, North Dakota and Wisconsin and 60 per cent complete in Minnesota, where 542 kilometres of new pipe is being laid. A new section veers south around reservation land of the Leech Lake tribe, which objected to the project.

ASIDE FROM PROTESTS AND CIVIL DISOBEDIENCE, WHAT OPTIONS DO OPPONENTS HAVE?

#Enbridge says the original 1960s pipe is deteriorating and carrying about half its capacity. The company is replacing it with pipe made of stronger steel that it says would enable resumption of a normal flow — about 121 million litres daily.

They await a ruling from the Minnesota Court of Appeals on whether the state Public Utilities Commission's approval was lawful. A pending suit challenges the Army Corps of Engineers' issuance of a permit. State and federal judges have refused to halt construction while the cases proceed.

Also, groups are pushing U.S. President Joe Biden to order the Corps to withdraw the Clean Water Act permit. During a protest Monday, actress Jane Fonda carried a placard with Biden's image and the words, “Which side are you on?”

Although Biden pleased environmentalists by cancelling the Keystone XL project, his administration has not done likewise with other disputed pipelines, including the Dakota Access line near the Standing Rock Reservation in the Dakotas.

Minnesota Gov. Tim Walz has stayed on the sidelines while the legal process over Line 3 unfolds. His hands-off approach differs from that of Michigan Gov. Gretchen Whitmer, a fellow Democrat who ordered Enbridge to shut down Line 5, which moves oil from Superior, Wis., through Michigan to Sarnia, Ont.

Whitmer's demand focuses on a roughly 6.4-kilometre section beneath a channel that connects Lake Huron and Lake Michigan, where the state granted an easement for the pipeline in 1953 and now seeks to revoke it. That action is also tied up in court.

Line 3 opponents are focusing on blocking the rebuilding project instead of shutting down the line, although their long-term goal is making it obsolete through conversion from fossil fuels to renewable energy.

WHY ARE ENERGY PIPELINES BECOMING A CAUSE CELEBRE?

The day after Fonda joined Line 3 protesters in Minnesota, the National Wildlife Federation in Michigan announced a radio and television ad campaign against Line 5 featuring actor Jeff Daniels. While environmental and Indigenous activists have fought energy pipelines for years, the involvement of celebrities is one illustration of widening resistance.

It comes after high-profile spills in the past decade, including a 2010 rupture of an Enbridge line in southern Michigan that sent oil into the Kalamazoo River. A resulting federal consent decree required Enbridge to upgrade the U.S. portion of Line 3.

Native Americans have been on the front lines of opposition to pipelines, some of which run through or near reservations. They say Line 3 threatens their waters and rights to gather wild rice, fish and hunt on ancestral lands. Enbridge says it consulted with tribes in rerouting the line to protect cultural resources and has employed more than 500 Native people for the project.

Also fuelling the battle against pipelines is climate change. Many activists consider virtually any project — whether new, an expansion or a replacement of existing pipes — a lifeline for fossil fuels that delays the transition to cleaner energy that scientists say is needed quickly to avoid catastrophic warming.

Enbridge says people will need oil for years to come and shutting down pipelines will mean more shipments by train and truck.