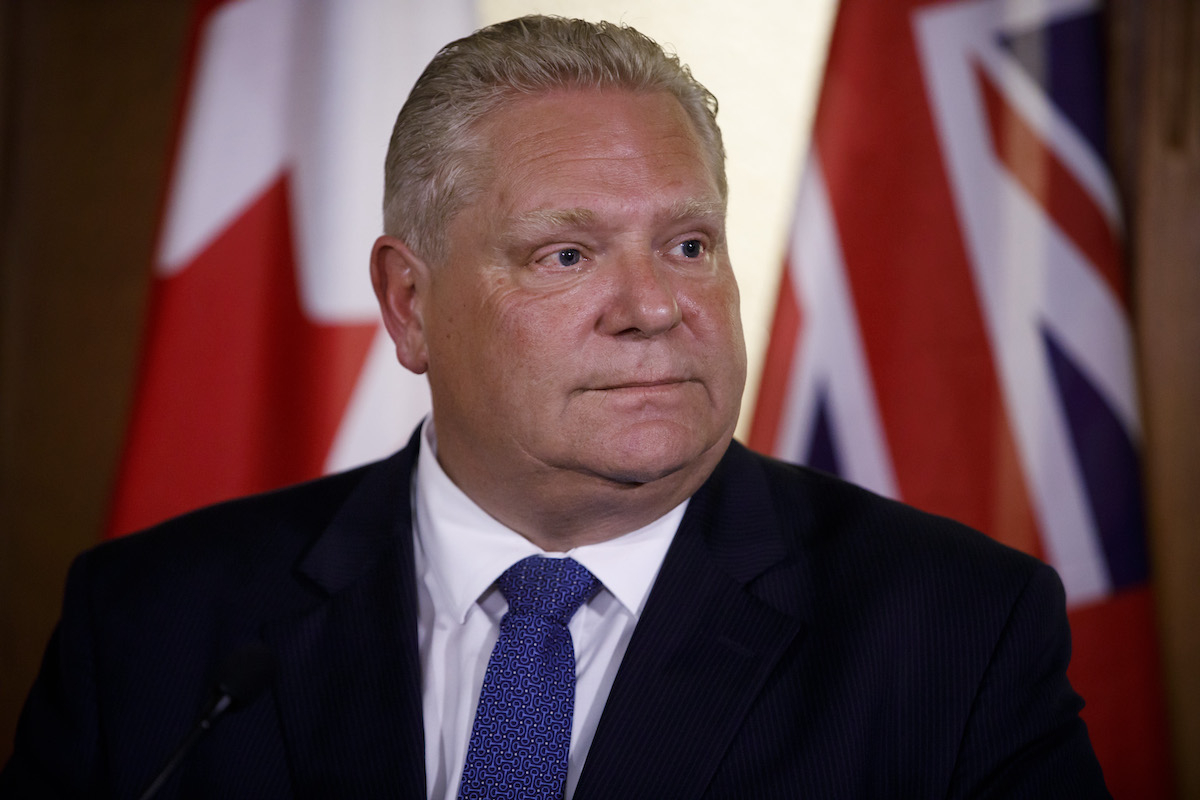 Whether it’s losing the fight against the federal carbon tax or having their legislation overturned, conservative provincial governments are getting their butts kicked in Canada’s courts lately. But Ontario Premier Doug Ford appears to have landed on a new strategy: overruling them.

Earlier this month, the Ontario Superior Court struck down his government’s Election Finances Act, which would have limited spending by third-party groups (like, say, teachers unions) in the runup to next year’s election, as an unconstitutional abrogation of their free speech rights. In response, Ford invoked Section 33 of our Charter of Rights and Freedoms — the so-called “notwithstanding clause” — and pressed ahead with his government’s legislation.

This isn’t the first time Ford’s government has threatened to use the so-called “notwithstanding clause,” which allows provincial legislatures to override certain parts of the Charter of Rights and Freedoms (in this case, the right to freedom of expression) for a period of five years. In 2018, Ford invoked it after a judge ruled his government couldn’t cut the size of Toronto’s city council nearly in half with the stroke of its provincial pen. Ultimately, his government was granted a stay on that order, and the legislation invoking the notwithstanding clause was allowed to lapse. That case is currently being heard by the Supreme Court of Canada.

But using Canada’s constitutional nuclear option purely to try to win an election risks creating all sorts of radioactive fallout — for Ford and the rest of the country. When the notwithstanding clause was added to the charter during the negotiations that led up to the repatriation of Canada’s Constitution in 1982, it was envisioned as a concession to the provinces — one that was proposed by Alberta’s Peter Lougheed. Neither Prime Minister Pierre Trudeau nor then-Justice Minister Jean Chretien liked the idea, but as Chretien wrote in his memoirs: “Canada probably wouldn’t have had any charter without it.”

For the better part of 40 years, it looked like a reasonable trade. Outside of Quebec’s decision to apply the notwithstanding clause pre-emptively to every statute its legislature passed from 1982 to 1987, it had been used only a handful of times until 2017. Since then, it has been invoked five times — always by conservative provincial governments.

In Quebec, Francois Legault’s Coalition Avenir Québec government used it to pass its controversial Bill 21, which prevented public workers in positions of authority from wearing religious symbols (a decision widely seen as targeting the province’s Muslim population). In Saskatchewan, Brad Wall’s government used it to override a court decision that would have prevented non-Catholic students from attending separate schools. And now, in perhaps the most transparently partisan usage yet, Ford is deploying the notwithstanding clause to help keep his political opponents quiet.

In the process, he’s managed to put the Canadian Taxpayers Federation (CTF) and the Canadian Civil Liberties Association on the same side of an issue, which happens about as often as the Toronto Maple Leafs making the Stanley Cup finals. Former Ontario attorney general and current CCLA president Michael Bryant described the decision as “a cravenly self-interested abuse of this extraordinary power," while CTF president Scott Hennig noted that “Mr. Ford’s decision to use it here, without even taking the time to appeal the decision, is patently self-serving.”

But it’s even worse than that. By normalizing the use of an extraordinary power, the Ford government is setting the stage for future suspensions and abrogations of the charter rights of Canadians by provincial legislatures. If that normalization happens, it could give conservatives an opportunity to fight back against a constitutional document they’ve long struggled to reckon with. Conservative politicians have always been wary of the charter, and not only because it was Pierre Trudeau’s signature achievement.

Conservatives have also been hostile towards the charter because the courts have interpreted it in ways that don’t align with their values, whether it was the 1988 decision to strike down abortion provisions in the Criminal Code or the 1999 decision that granted equal rights to same-sex partners and paved the way for the legalization of same-sex marriage a few years later. Now, it seems, provincial legislatures — at least, ones controlled by conservative parties — are more willing to strike back against it.

Back in 2018, when Ford invoked it the first time, Saskatchewan Premier Roy Romanow, former Ontario attorney-general Roy McMurtry, and former prime minister Chretien all came out against his reckless usage of a provision that was put in the Constitution — one they all helped craft — for emergency purposes only. Even then, few of them could have imagined that the charter’s notwithstanding clause would ever be used for such nakedly partisan and self-serving purposes as is happening right now. But, then, few of them could have anticipated a premier as nakedly partisan and self-serving as Doug Ford.

Will Doug Ford pay for his province's deadly decisions?

Doug and the Thugs are ending

Doug and the Thugs are ending as they began their reign of destruction : naked contempt for democratic processes, naked panic at losing the power to chew up the province for the profit of their donors/masters of the merchant elite.
My hope is that this muzzelling will backfire by mobilizing furious citizens to hold rallies in their backyards, livingrooms and neighbourhoods-- rallies where NO MONEY IS NEEDED --just word of mouth and lots of sharing of how Doug and his Thugs have harmed citizens ---- at Least 8000 deaths on their watch by cynical calculation that the disposable are the ones dying , Not their elite donors

Thank you so much, Mr.

Thank you so much, Mr. Fawcett, for raising two issues that most in the mainstream press do not want to touch (apparently): namely, 1) that this is, indeed, a slippery slope that enables premiers to invoke the Clause on even the most trivial of matters (and corresponding erosion of our rights and democratic institutions); 2) that this seems to be (is) a Tory thing -- they seem to hate any limitations being placed on their power. I very much hope that the opposition parties continue to raise this issue until election day. Thanks again, Mr. Fawcett -- nice piece of analysis.

Max taps into the origins of

Max taps into the origins of how formerly progressive conservatism has devolved into the current nightmare of the "religious right," which, not just coincidentally, is now perceived as having "lost its mind."
Their rigid opposition to the Charter (which also goes some way to explaining their oddly avid hatred for Justin Trudeau) arose from various societal changes in the sixties, feminism being a major one, comparable to "black lives matter;" Yoko Ono was right when she said "women are the niggers of the world." So expanding human rights such as abortion and gay marriage were clearly seen as the slippery slope to biblical hell.
Conservatives' staunch, po-faced valuing of "tradition" is simply about men remaining in charge of society, starting with women's bodies; they sanctimoniously call this abomination being "pro-life." Which is why we keep coming back to abortion AND gay marriage, neither of which conservatives have have ever REALLY accepted, so the very concept of "trans" makes them apoplectic. Liberals simultaneously find this wildly entertaining while truly loving a broader definition of what is human. That's why we're better human beings in every sense of the word, because we're actually HUMANE, something conservatives are manifestly incapable of. Politically, we need to stick together and shout from the rooftops, ABC, anything but conservatives. Liberals should be the natural governing party of any democracy; when was the last time you heard the term "conservative democracy?" There are reasons why we only talk about a "liberal democracy."
A "conservative brain" is an actual thing, (google it), and is dangerous to the rest of us if in charge, especially during times of true sea change, like now.

They just can't DO change.