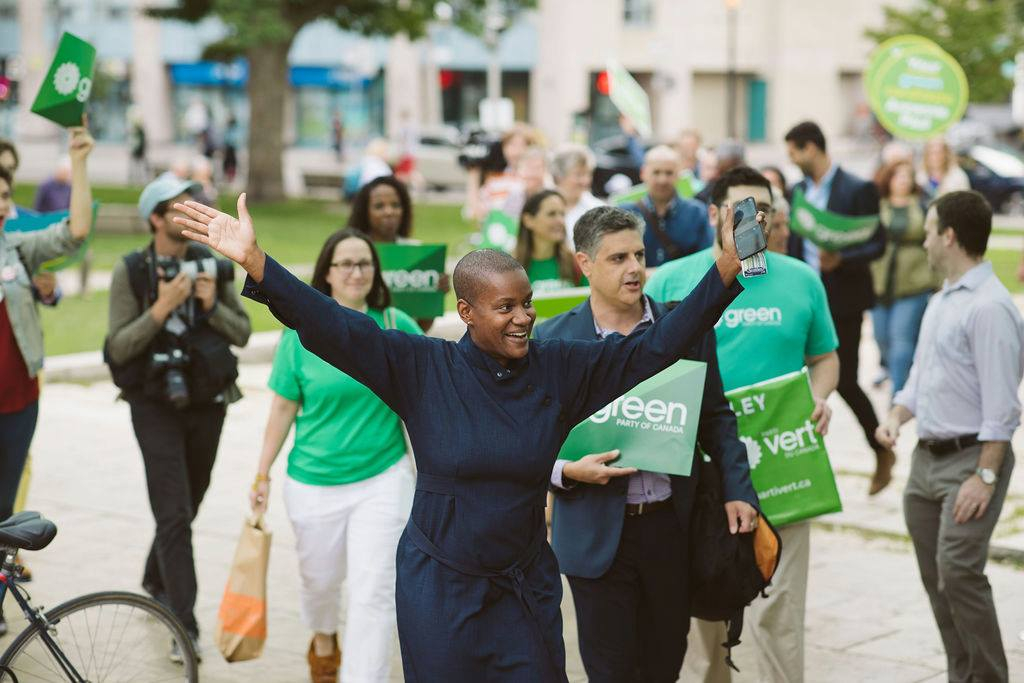 By all rights, this should be the Green Party of Canada’s moment to shine. After winning three seats in the last federal election, including its first one outside of Vancouver Island, the party had the opportunity to pick a new leader who would take it further towards the political mainstream. And what better timing for that push than in the midst of an increasingly obvious climate crisis, one that is pushing the issue to the top of our shared list of priorities as Canadians.

Well, so much for that. Instead of rising to greater relevance, Canada’s Green Party is in danger of running itself into the ground. And new leader Annamie Paul, who was elected by the party’s membership to replace Elizabeth May, seems to be leading the charge there. A series of internal disputes that were set in motion by the conflict in Israel-Palestine and Paul’s refusal to repudiate senior adviser Noah Zatzman after he described Green MPs critical of Israel as “anti-Semitic” apparently pushed one of them to cross the floor. Jenica Atwin, who became the first Green MP outside of British Columbia in the last election, explained her decision by pointing to the “distractions” in her former party.

Those distractions have only intensified since she left. The Green Party’s federal council and board of directors continue to push for a non-confidence motion in their leader, one that will apparently be held on July 20. If 75 per cent of council members vote in favour, the non-confidence motion will be put to Green Party members at an Aug. 21 general meeting — right on the doorstep of a federal election, if not in the midst of it.

It gets worse, if that’s even possible. According to the Toronto Star, during a recent virtual staff meeting that covered the decision to eliminate nearly half of the party’s staff, Paul was actually muted by interim executive director Dana Taylor. “The attempt to silence the leader was met with shock and surprise from a number of staff members on the call,” the Star reported, citing a source who attended the meeting. “Paul was asked to speak again only after two attendees refused to ask questions until the leader was able to finish her remarks.”

This is surely not what former leader Elizabeth May had in mind when she stepped down in 2019 after 13 years on the job. But it shouldn’t be completely surprising, given May’s presence and personality had long defined the party for most people. In the absence of that sort of iconic leadership, the Greens have to pitch themselves to Canadians based on what they actually believe.

That’s not as easy as it might seem. Beyond their interest in protecting the environment, there doesn’t seem to be very much uniting the Green Party members living on Vancouver Island with those in downtown Toronto or the Maritimes. They aren’t, after all, a traditionally left-wing party, one that can outflank the NDP on issues like labour rights, tax policy and immigration. Instead, they’re solar-powered centrists, as Paul has made clear with her embrace of markets and carbon pricing, and May made clear with her willingness to work with Conservative governments in the past.

That position might have been tenable when May first entered federal politics. But now, with the Liberal government taking increasingly decisive action on climate change, it’s not clear why voters who prioritize the environment on their ballots would want to risk splitting that vote and allowing a Conservative candidate to win.

This is a familiar headache for federal Green Party supporters, who consistently watch their party build strength in the runup to elections and bleed it all out before they’re over. “In one election campaign after the other, upwards of 10 per cent of voters suggested to pollsters that they supported the Greens,” socialist writer and former Green Party member Paris Marx noted in a CBC opinion piece. “But when voting day came around, the support invariably melted away as many Green-leaning voters cast ballots strategically for candidates with a greater chance of winning.”

The Green Party's infighting with Annamie Paul is ruining its ability to take part in the climate conversation in this crucial pre-election period. #cdnpoli #climate

That’s a reflection of our first-past-the-post electoral system, which disadvantages parties with modest national appeal and rewards those with a more regional focus. In 2019, the Green Party received nearly 1.2 million votes Canada-wide, or approximately 200,000 fewer than the Bloc Québécois. And yet, while the BQ walked away with 32 seats and a meaningful presence in a minority Parliament, the Greens had just three.

But if those are the rules of the game, you have to play them a little better than Annamie Paul has so far. Shortly after winning the party’s leadership in 2020, she decided the best path for her to win a seat in parliament would be to contest the byelection in Toronto Centre for Bill Morneau’s seat. But his former riding of Toronto Centre is a long-standing Liberal stronghold, and Liberal candidate Marci Ien easily held off the Green leader. That left her without a seat and the Green Party without its leader in the one place she needed to be — Parliament.

Now, instead of fighting for a bigger piece of the national conversation, the Green Party is once again fighting for its political life. That may be particularly difficult in an environment where it no longer has the market cornered on climate policy in Canada. If the Greens get wiped out in the next election and the Liberals form the kind of majority government the polls are signaling, they can at least take comfort in the fact that their defining issue will have won it for someone else.

It might help if they'd get out there with concrete plans for switching over 10 million gas furnaces to heat pumps; how we travel this very large country without flying; what a soft-landing for millions of carbon-industry workers will look like, so they don't regard the Greens as enemies.

Right now, they're only in the news when they're opposing O&G infrastructure, which employs a lot of people. You'd swear their big strategy was to get millions of votes from people who hate Big Oil. They're pretty hate-able, sure, but there just aren't enough people who hold it as a passion, and a lot that are alienated.

The Trans Mtn pipeline expansion promises 50 permanent new jobs in BC and 40 in AB. Meanwhile, the industry is shedding jobs by the thousands in AB.
"Once the proposed Expansion Project is complete, operating and maintaining 1,150 kilometres of the twinned Trans Mountain Pipeline system will result in approximately 90 new operating positions: approximately 50 in British Columbia and 40 in Alberta."
• web.archive.org/web/20170701213406/www.transmountain.com/permanent-jobs
Why risk thousands of jobs in sustainable industries for 50 pipeline jobs?

Even as oilsands production rises, the industry continues to shed jobs due to automation. Tens of thousands of Albertans lost their jobs in recent oil price crashes. Time to get off the oilsands rollercoaster.

Business Council of AB: "We built up for an oil price environment in the $100/barrel range. With $40-50/barrel oil, a global pandemic and long-term trends toward decarbonization and an increased use of automation and technology, the reality is it's highly unlikely the jobs being shed now will come back."

"Making a less energy intensive Alberta can create many jobs. Out of 56 economic sectors, oil and natural gas extraction are dead last in job creation — a measly 3.5 jobs for every $1 million invested."
"Alberta needs a low-carbon plan" (Rabble)

"Canadian jobs in renewable energy had already surpassed jobs in the oil sands back in 2014. That's before the downturn in the oil sector, and before the continued growth in development and jobs in clean energy."
"Why do we listen to oil execs when they talk about jobs?" (National Observer)

What are fossil fuel jobs costing us?

Max Fawcett: "now, with the

Max Fawcett: "now, with the Liberal government taking increasingly decisive action on climate change, it’s not clear why voters who prioritize the environment on their ballots would want to risk splitting that vote …"

In what alternative universe is the Liberal govt taking increasingly decisive action on climate change?
Where is the evidence to support this claim?

I was wondering exactly the

I was wondering exactly the same thing... WHAT decisive action on climate change?

I agree with Max on all of it

I agree with Max on all of it - I think that Ms. Paul’s leadership has been a complete disaster. And suspect that like Mr. Trump in narcissism will not hesitate to bring the party down with her, all the while playing the victim, again just as Mr. Trump had done.

That said, though the Liberals are failing Canadians on climate, in a FPTP system still in that regard they are often the least worst option.

Hey Max, you a Liberal

Hey Max, you a Liberal writing about the Green Party ? You believe that buying a pipeline & arresting Ms May for trying to stop it is the way to address our current climate catastrophe? AP is not the Green Party & the party will survive her once she is gone. She is personally to blame here. She fooled some peope, including Ms May, but she didn't fool me. She's an angry black woman who refuses to communicate. Atwin is (was )the Young Greens hopeful for future leader. It is a shame what AP did & continues to do. You seem to think that just becuz of our unfair electoral system that the Green Party has no chance, but people are stepping up to run as Green Party candidates, that have never even been politicians before. Really good caring hardworking Canadians. You didn't even uncover the fact that AP is a very jealous, self-serving, fear-mongering, physcopathic, narcisstic dictator who has been refusing vetting to those that she thinks threaten her leadership personally. Did you not research Paul Manly ? Look at what he did before politics & how well he has done since. AP wants to get rid of him, just as she did Atwin. Do you think this would have happened if Ms May was still leader? No. This is all AP's doing. Don't blame the whole Green Party of Canada.

I should not have said "

I should not have said " angry black woman ", my apoligies, instead I meant 'angry person'.