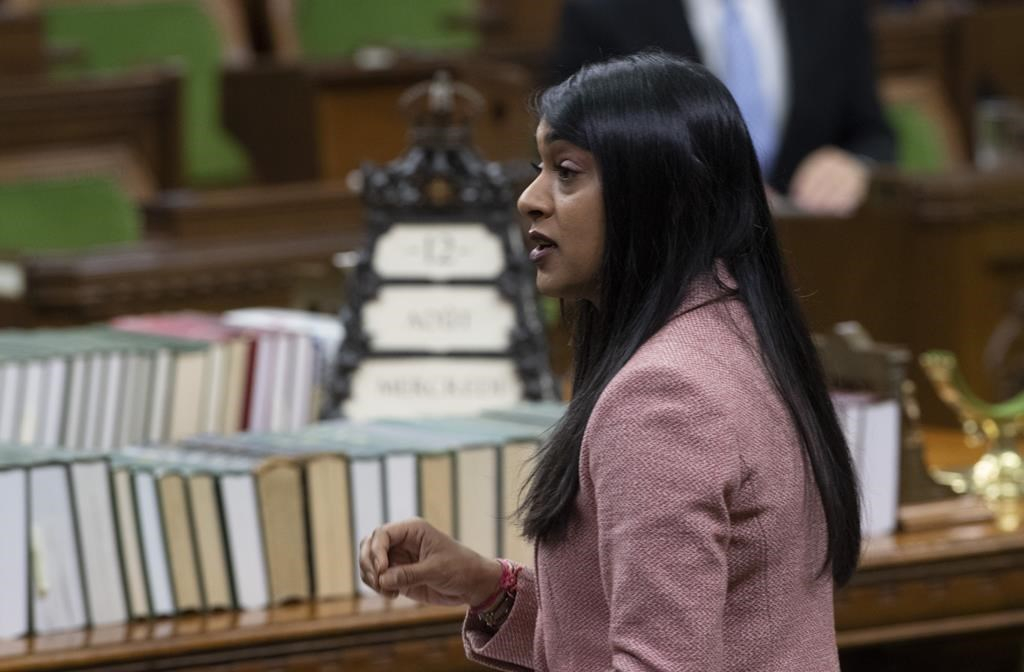 Diversity Minister Bardish Chagger rises during a sitting of the Special Committee on the COVID-19 Pandemic in the House of Commons in Ottawa, Wednesday, Aug. 12, 2020. Photo by: The Canadian Press/Adrian Wyld
Previous story

OTTAWA — The federal government will continue rejecting and fighting antisemitism in all its forms as hate-motivated crimes against the Jewish community rise in Canada and around the world, Prime Minister Justin Trudeau said Wednesday.

Speaking to a national antisemitism summit hosted by the federal government, Trudeau said the spike in hate crimes is troubling and alarming.

"Antisemitism isn't a problem for the Jewish community to solve alone, it's up to everyone to take on this challenge," he said.

Trudeau's government announced Wednesday that 150 projects representing over $6 million in funding have been recommended for development under a program to support communities that face the risks of hate crimes.

"This is the largest investment for a given year in the history of the program, and it will enhance the security of many synagogues, Jewish schools and community institutions," Trudeau said.

He said the implications of the recent Israeli-Palestinian conflict resonated around the world with an unacceptable rise in antisemitism.

"We remain committed to supporting progress towards a two-state solution. We continue to oppose unilateral actions that jeopardize the prospects for peace,” he said.

"We will stand firmly with the Israeli and Palestinian peoples in their right to live in peace and security, and with their human rights respected."

Diversity Minister Bardish Chagger said the summit will allow community members to speak directly with politicians in an environment that ensures their safety.

The federal government will also hold a summit on Islamophobia on Thursday.

Chagger said in an interview Tuesday the government will be listening and engaging with community members aiming to turn their ideas into actions to implement policies that reflect the diversity of Canada.

Green party Leader Annamie Paul told a virtual news conference Wednesday the government's decision not to invite her to speak at the summit is a "loss" to the discussion.

"I am one of a kind. I am the first Jewish woman to lead a major political party in Canada, and I'm only the second Jewish person (to lead a party) in the last 45 years, so, my perspective matters in this conversation."

NDP Leader Jagmeet Singh said discussing the rise of hate crimes in a national summit is important but is not enough to address the issue.

"There are a number of solutions that we have known about for years, and, sadly, Mr. Trudeau has not responded, has not taken action," he said.

"Some of the things we can do: immediately tackle online hate, … put resources at the federal level of CSIS or CBSA or other federal resources towards dismantling white supremacist groups, extreme right-wing groups, that are spreading divisive and hateful messages that are resulting in the loss of lives of people."

Irwin Cotler, Canada's special envoy for preserving Holocaust remembrance and combating antisemitism, said in an interview Tuesday that Jews are being targeted and threatened in their neighbourhoods. Synagogues, memorials and institutions have also been attacked and vandalized.

The organization says 44 per cent of violent antisemitic incidents in 2020 were COVID-19-related, with Jews being spat on and otherwise assaulted, driven in part by antisemitic conspiracy theories.

Cotler proposed a 10-point action plan to combat antisemitism in Canada during the summit.

"The summit is as timely as it is necessary, but it will only be effective if, in fact, we implement an action plan," he said.

His proposed plan calls on the government to implement a comprehensive national action plan to combat antisemitism by enhancing security and protection for Jewish institutions including synagogues, schools, community centres and memorial sites. The plan would also provide more resources for Holocaust and antisemitism education, among other elements.

He said Canadian governments should learn from the best practices and the failures of European countries who have developed plans and proposals to combat antisemitic hate crimes.

Hate is a demon the police can’t slay