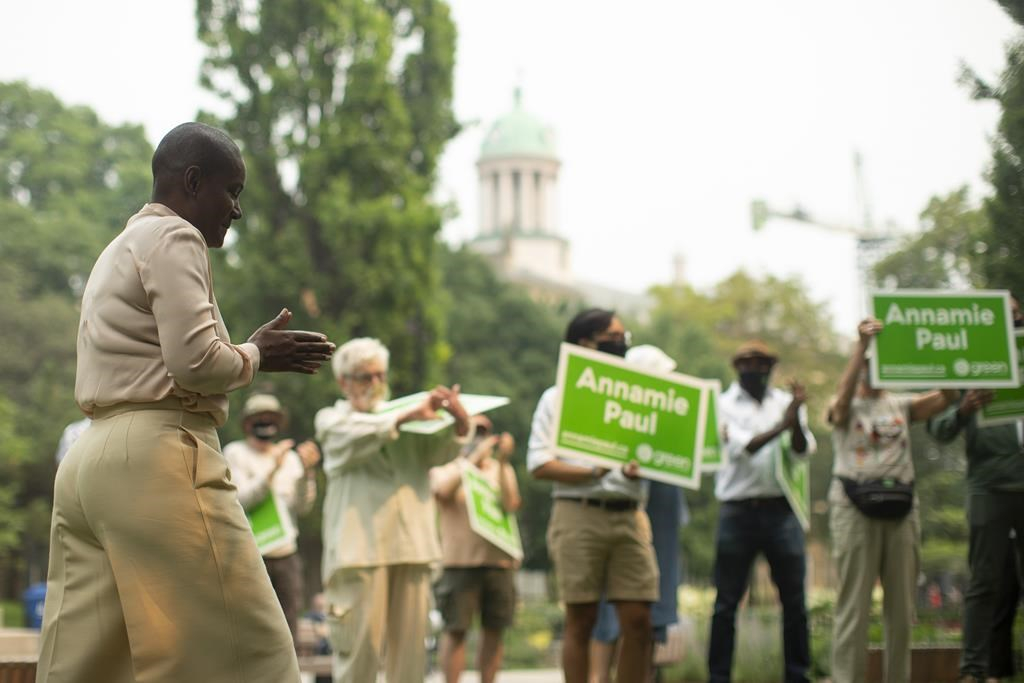 OTTAWA — The fight within the Green Party has spilled over to the courthouse.

Court filings show the Green Party of Canada aims to overturn arbitration orders that stymied threats to Annamie Paul's leadership, ending a brief ceasefire between warring factions ahead of a likely federal election this year.

In a notice of application filed Wednesday in Ontario Superior Court, the party along with the Green Party of Canada Fund say an arbitrator exceeded his authority in requiring party executives to cancel their non-confidence vote against Paul as well as a review of her party membership.

The documents state that Paul's employment contract was with the Green fund, a separate legal entity that controls the party purse strings, rather than with the party proper, whose federal council was ordered to call off its moves to depose the leader.

The arbitrator "erred in law" because he had no authority to impose orders on an entity that is unconnected with Paul's contract, the filings argue.

Green president Liana Canton Cusmano sent an email obtained by The Canadian Press to membership Wednesday saying the party disputes a claim made by Paul about confidentiality rules.

Paul has said she and the Greens cannot speak publicly about why the non-confidence vote and membership review were put on hold until at least Aug. 21, when a general convention is scheduled.

"I've provided as much clarity and transparency as I can," she told reporters Wednesday. "What we do have now is certainty, for a while in any case … We know there will be no further motions introduced."

That certainty is now out the window with a legal proceeding underway.

The end of an externally imposed truce from earlier this week casts doubt on Paul's attempt at a news conference Monday to show her party has pushed past a tumultuous period as Canada's 44th federal election looms.

The fight within the Green Party has spilled over to the courthouse. #cdnpoli

Paul initiated the arbitration process earlier this month, according to the legal application.

Other problems threaten to hobble the Greens, including a payroll that was cut in half this month due to financial imbalances reported by party brass, despite Paul's objections to the temporary layoffs.

Green executives have also moved to withhold funding from Paul's campaign to win Toronto Centre as she canvasses almost daily in the riding following two unsuccessful attempts that have kept her out of the House of Commons.

The nixed non-confidence vote, initially slated for last Tuesday, could have resulted in a party-wide vote next month to oust her. The application says an arbitrator halted the process and ordered that no similar motions be proposed by the current federal council — the party's main governing body, set to turn over on Aug. 19 — or before the next party convention, scheduled for Aug. 21.

Meanwhile a membership review was on track to suspend Paul's baseline status in her own party before the arbitrator froze the process.

The applicants argue the arbitrator incorrectly concluded the Green members' code is "trumped" by Paul's employment agreement as well as a party bylaw stipulating that the leader can only be removed from office by a general vote following a non-confidence vote by council, according to the arbitrator.

Annamie Paul is fighting to change the narrative, but the numbers are clear

This is crazy town stuff.

This is crazy town stuff. Are they going to have to wind up the Green party and start a new one?
I don't like Annamie Paul much--in terms of foreign policy she's basically a Liberal, and she seems to have been trying to unilaterally replace the Green Party positions on foreign policy as decided by the members with her own very different positions. Not cool.
But the Green Party Council seem to be total idiots, perhaps racist, willing to blow up the whole party to get rid of a legitimately elected leader they disagreed with (who happened to be an uppity black woman) when they knew an election was just around the corner.

Beyond the terrible optics of all this, it seems like the top Greens have been spending so much of their time and effort on this fiasco and on depriving the leader of resources (sacking staffers and so on) that they've been unable to actually run the party. Apparently they've barely got any candidates set up in the ridings. Green voters might stoically vote Green despite all the bad craziness swirling around, but they can't if there ain't no candidate in their riding.