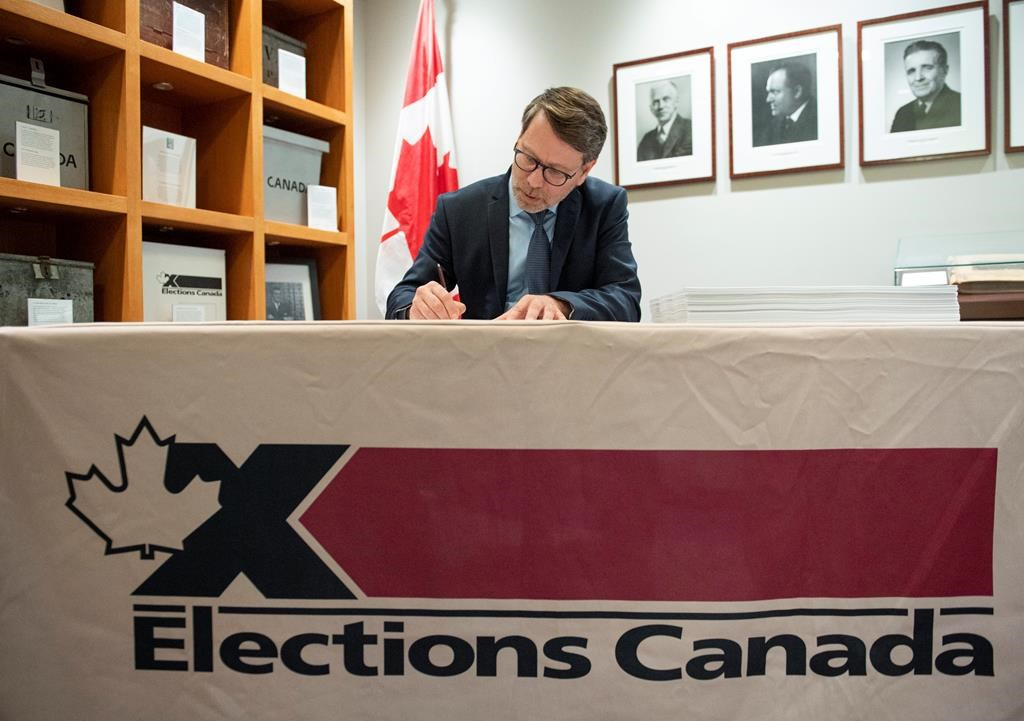 Canadians may have to wait a few days to find out the final results of a federal election called in the midst of the COVID-19 pandemic, Canada's chief electoral officer warns.

And they may find themselves voting in unusual places or having to go a bit further afield to cast their ballots.

But Stephane Perrault wants Canadians to know there's nothing nefarious about the departures from the norm.

They're part of a process Elections Canada has devised to ensure an election can be conducted safely and produce trustworthy results while the country remains in the grip of COVID-19.

"It's important for Canadians to understand that this is part of the plan of deliberate choices that we've made," Perrault said in an interview with The Canadian Press.

"It's not an accident, it's not a sign of things going wrong but in fact is part of the process as we've designed it in these very unique circumstances of the pandemic."

Prime Minister Justin Trudeau is widely expected to pull the plug on his minority Liberal government later this month for an election in mid to late September. All parties are gearing up for a campaign, even as chief public health officer Dr. Theresa Tam is warning that Canada is on the verge of a fourth wave of COVID-19, driven by the more infectious Delta variant.

Should a summer election call occur, Elections Canada is ready for a potentially explosive increase in the number of Canadians who choose to vote by mail during the pandemic — as many as five million, compared to fewer than 50,000 in the 2019 election.

Perrault said mail-in ballots will not be counted until the day after the election, in order to allow them to be received right up to the last minute before polls close and to give election officials time subsequently to carefully conduct checks to ensure no one who voted by mail also cast a ballot in person.

In a worst-case scenario, he said it may take two to five days to complete the mail-in ballot count.

That could mean the results of close races in some ridings won't be known immediately. And, if the national results are tight, it could mean the overall outcome — which party wins the most seats, whether it has a minority or majority — could be equally in limbo.

But Perrault said the time lag is necessary to guarantee the integrity of the results.

"As much as we like early results, I think Canadians expect that we do it right."

Mail-in ballots during last fall's U.S. election became fodder for Donald Trump's unfounded claims that voter fraud robbed him of the presidency. Millions of Republican supporters and conspiracy theorists continue to believe that, undermining the legitimacy of the American electoral process.

But Perrault is hopeful the vast majority of Canadians will continue to have confidence in the electoral process here. Unlike the U.S., he noted there is no "deep partisan divide" in Canada over the issue of voting by mail.

"All parties see the need to have vote by mail, they understand that we have controls in place ... People should not expect what happened in the U.S. to happen in a federal election in Canada."

In anticipation of a dramatic increase in demand for mail-in voting, Elections Canada plans to make it possible to apply online for mail-in vote kits. Voters who fear their mail-in ballots won't be received on time will be able to drop off their ballots at their local polling place on voting day or have a friend do it for them.

The names of anyone who is issued a mail-in ballot will be crossed out on voting lists as having already voted. Individuals who don't receive their mail-in ballot by voting day may swear an oath to that effect and still vote in person.

However, the mail-in ballots of anyone found to have voted in person will not be counted.

Elections Canada still expects the majority of Canadians will choose to vote in person. The agency has stocked up on face masks, sanitizers, single-use pencils and plexiglass partitions to ensure the safety of voters and poll workers.

It has also attempted to line up potential locations for polling stations in advance. Nevertheless, Perrault said he expects some of the usual polling locations, like schools and recreation facilities, will not want to allow large numbers of voters coming into their buildings during the pandemic.

Consequently, he said some voters, especially in small communities, may wind up going to unusual places like hotels or movie theatres to cast their ballots. It may mean some voters will have to travel further to get to their polling place.

"Some may be suspicious and wonder what's going on and it's important that they understand that there's nothing nefarious going on. We're trying to find the best available locations for them," he said.

Last summer, Perrault called for legislative changes that would, among other things, allow a pandemic election to be held on two weekend days, rather than the usual Monday.

The Trudeau government did introduce a bill that incorporated some of Perrault's recommendations but it was not passed before the House of Commons broke for the summer.

Perrault said his original recommendations were based on the state of the pandemic at the time, when no vaccines were available and he feared that his usual poll workers, who tend to be over 60 years of age, would not put themselves at risk.

The situation now is quite different, with Canada among the world leaders in vaccinations, and Perrault said he's confident Elections Canada can deliver a safe, fair pandemic election without legislative changes.

Perrault had also wanted legislative endorsement of his discretionary authority to allow for more flexibility in how ballots are cast at vulnerable long-term care facilities. While he didn't get that in legislation, he said he feels he did get all-party endorsement of his plans in any event.

He also called last summer for a long campaign period in order to give Elections Canada more time to implement safety measures and process mail-in ballots.

By law, an election period must be set at a minimum of 36 days and no longer than 50 days but it is up to the prime minister to determine the exact length of the campaign within those parameters.

Perrault said Elections Canada is prepared to run an election, regardless of the length of the campaign. Still, he said "there is merit to a longer period," to give people more time to vote by mail and to give the agency more time to recruit workers and find polling places.

This report by The Canadian Press was first published Aug. 4, 2021.