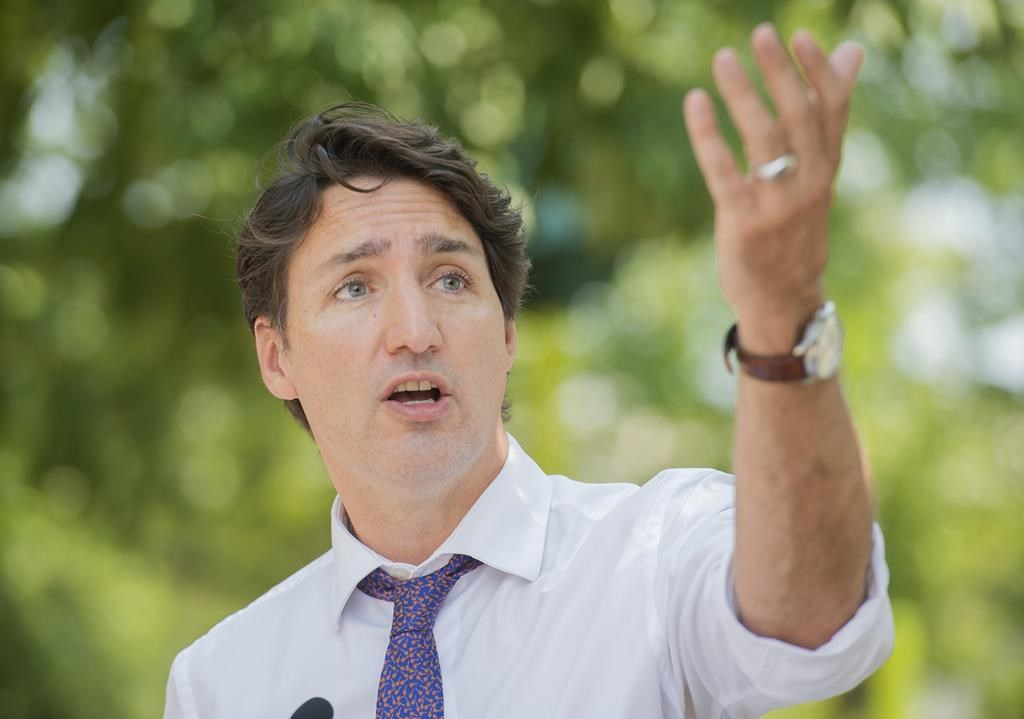 But the prime minister refused to say whether he will delay any use of booster shots in Canada until more of the world gets access to vaccines, as the head of the World Health Organization requested this week.

Trudeau was in Montreal Thursday to announce a $6 billion deal on child care, which Quebec Premier Francois Legault slightly upstaged by announcing in his speech that Quebec would be imposing vaccine passports for some non-essential services in that province.

Trudeau, who has been reluctant before to support the use of vaccine passports domestically, thoroughly backed the Quebec plan. He said he has also asked the country's top bureaucrat to look at whether any federal workers should be required to get vaccinated.

Almost 82 per cent of eligible Canadians at least 12 years old have their first dose, and 69 per cent have both doses. It is among the best vaccination rates in the world, but it still means almost six million eligible Canadians have no protection, on top of the 4.8 million children who haven't yet been approved for the vaccine.

"That's why I've asked the clerk of the Privy Council, who is responsible for the federal public service, to look at mandatory vaccinations for federal employees," Trudeau said.

"And we're also looking at federally regulated industries, to encourage or perhaps even to mandate vaccinations for those industries."

That would include airlines, railways, banking, Parliament and Crown corporations like Canada Post. There are almost one million workers in federally regulated industries, and close to half a million people who work directly for the federal government, a Crown corporation, the military or the RCMP.

Chief public health officer Dr. Theresa Tam said the discussion on mandatory vaccines is well underway. She said one of the key questions is who various employees will interact with and what the risk level is.

Some federal workers may be required to get COVID-19 vaccine: Prime Minister Trudeau. #CDNPoli #COVID19 #Covid19vaccine

"But again, to emphasize that it is really important for workplaces, if we're going to have people come back to work, that everyone should get the vaccine," Tam said.

While Tam said most new COVID-19 cases in Canada are being found in unvaccinated people, she said Canada is closely monitoring breakthrough infections in fully vaccinated individuals. That data will drive decisions on whether, or when, booster shots will be needed, she said.

Vaccine-maker Moderna said Thursday its analysis found its mRNA vaccine remains highly effective six months after a second dose. However CEO Stephane Bancel said he anticipates booster shots will be needed for the winter, particularly against the new variants like Delta.

Pfizer, the other main vaccine supplier in Canada, has previously said it believes booster shots will be needed soon, even though it too said efficacy had waned very little after six months.

Germany and several other European nations are being heavily criticized for offering booster shots to some people already, even as many parts of the world have hardly vaccinated anyone.

World Health Organization head Dr. Tedros Adhanom Ghebreyesus Wednesday called for all countries to halt any booster plans until at least the end of September.

"We cannot accept countries that have already used most of the global supply of vaccines using even more of it," he said.

Trudeau however sidestepped any question on whether Canada would delay any talk of boosters until more of the world gets their first shots. He answered a direct question about it by stressing it's important to get vaccinated in the first place.

The Our World in Data project says only one per cent of people in low-income countries have received even one dose.

This report by The Canadian Press was first published Aug. 5, 2021.