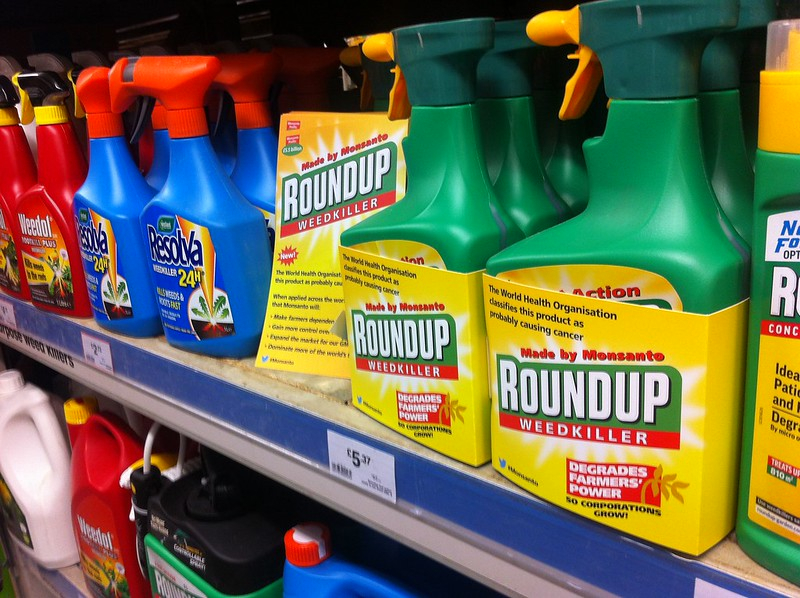 Glyphosate, a controversial herbicide, is used in popular sprays such as Roundup. Activists have been relabelling bottles of Monsanto's Roundup weedkiller in shops across the U.K. Photo courtesy of Global Justice Now via Flickr Creative Commons
Previous story
Next story

A proposed increase to the allowable levels of glyphosate on food crops has been paused by the federal government while more studies are done. The move announced Wednesday stirred cautious optimism among environmentalists, who have long called for the ban of the pesticide.

Glyphosate is Canada’s most widely used herbicide. It is found in popular sprays such as Roundup, and is easily found at any big-box garden store. The proposal to allow three times more of the product on food such as nuts, oats and beans will be on hold until at least spring 2022, which Lisa Gue, national policy manager at the David Suzuki Foundation, says is a step in the right direction.

Also of note, Gue says, are two other parts of the government’s announcement: a commitment of $50 million over three years towards pesticide regulation and alternatives research; and Health Canada’s commitment to a targeted review of specific provisions of the Pest Control Products Act.

In 2015, the International Agency for Research on Cancer working group dubbed glyphosate a probable carcinogen for humans. Scientists have also sounded the warning bells on what the spray could mean for the health of aquatic life, as well as land creatures and bees.

Other federal government decisions on the use of neonics, a class of pesticide which harms essential pollinators and insects, worries Gue and other groups — who believe there have been a series of problematic decisions from the government when it comes to pesticides. A review of the underlying act makes her hopeful, she says.

“I hope that this review will centre on improving environmental and health protections from pesticides, and really kind of coming to grips with the role that pesticides play,” she said.

“When it comes to the biodiversity crisis, we can’t actually be successful in halting the destruction of nature if we continue to permit and facilitate the widespread use of toxic pesticides.”

When it comes to the pause on the decision, Ecojustice staff lawyer Laura Bowman worries an increase may still be in the future.

“They could simply go ahead and make the same decision in the spring of 2022. Or see, perhaps once they feel that some of the excitement has died down,” she said.

“It's important that they've recognized that there is an issue that requires further consideration ... there’s no guarantees about what the ultimate decision will be.”

In 2015, the International Agency for Research on Cancer working group dubbed #glyphosate a probable carcinogen for humans. Scientists have also sounded the warning bells on what the spray could mean for the health of animals and insects.

Green MP Paul Manly emphasized that he supports a full ban on the use of glyphosate.

In May, former Green MP Jenica Atwin tabled a bill asking to ban the use of glyphosate in Canada, which Manly seconded. Atwin said the bill was inspired by those in her home province of New Brunswick, where thousands have opposed spraying in the region's forests.

For Manly, using a preventive approach when it comes to health is one reason to ban the herbicide.

“The government’s announcement focused on agriculture and agri-business, but the use of this herbicide is also compromising natural climate resilience. In the forest industry, glyphosate is used to maintain monocultures of trees that have market value, and kill off species that form natural fire breaks,” he said.

“We need those natural fire breaks, as we’re facing more and more intense droughts and fire seasons. To protect species diversity in forests, and the wildlife that inhabits them, the use of glyphosate needs to be banned.”

It's high time the government

It's high time the government started paying attention to the dangers of this pesticide lurking in our food and forests. This is only a start: the future of farming has to be in small, biodiverse organic farms. The ETC group (founded by Pat Roy Mooney) has been warning that the most efficient farms are small. Only recently, UBC published a study of Canadian farms that demonstrated that small farms (approximately 2 hectares) are more efficient and biodiverse than huge farms.