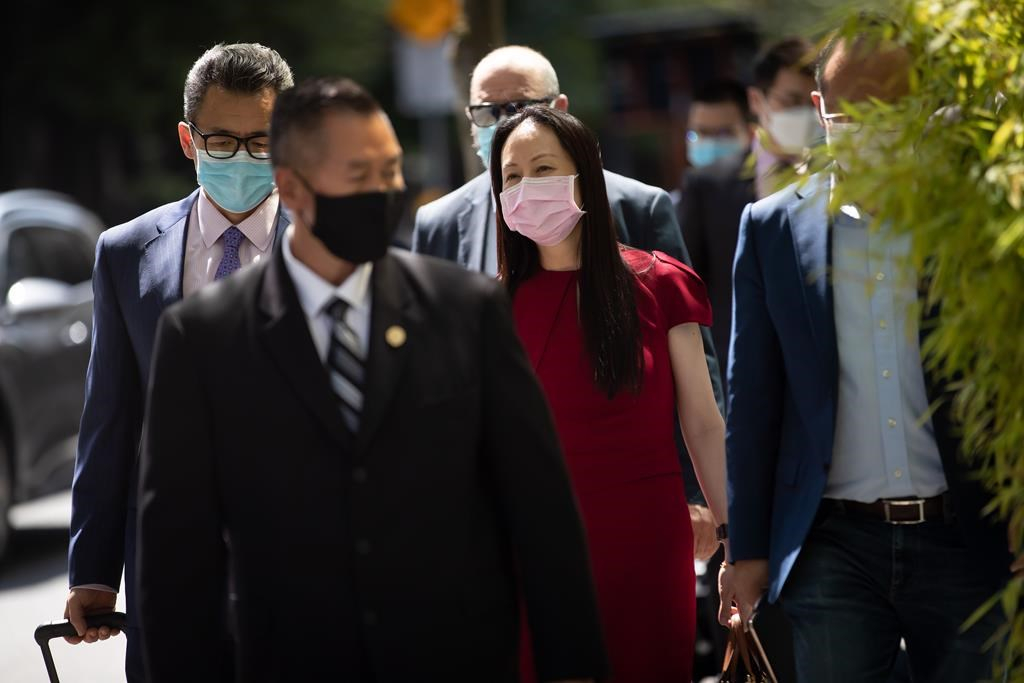 Meng Wanzhou, chief financial officer of Huawei, returns to B.C. Supreme Court after a break from her extradition hearing, in Vancouver, B.C., on Tuesday, Aug. 10, 2021. Photo by The Canadian Pres/Darryl Dyck
Previous story
Next story

The United States has laid out a case against Huawei executive Meng Wanzhou that shows her actions meet the classic definition of "commercial dishonesty," said a lawyer for Canada's attorney general, as her case entered its final stage in the B.C. Supreme Court.

Robert Frater said the allegations of what Meng both said and left unsaid in a presentation to international bank HSBC in 2013 represent the essential elements of fraud and she should be extradited to face charges.

"The evidence of dishonesty in this case we say is abundantly clear," Frater told the judge Wednesday.

Meng was arrested at Vancouver's airport in December 2018 at the request of the United States in a move that soured Canada's relationship with China.

Her long-awaited extradition hearing is proceeding as courts in China prosecute Canadians whose sentencing or detentions are widely seen as retaliation for her arrest.

Entrepreneur Michael Spavor was found guilty of espionage and sentenced to 11 years, while Canadian Robert Schellenberg's 15-year sentence for smuggling drugs was increased to the death penalty on Tuesday. Michael Kovrig stood trial in March but there has been no word on when a verdict might be announced.

Prime Minister Justin Trudeau condemned Spavor's sentence following his "arbitrary detention" and pledged that officials would work "around the clock" to secure both his and Kovrig's release.

Please read my statement on China’s unacceptable and unjust conviction and sentencing of Michael Spavor: https://t.co/HkclGFeWCB

Asked whether Canada was negotiating over possibly sending Meng home in exchange for the release of Spavor and Kovrig, Canadian Ambassador to China Dominic Barton said, “There are intensive efforts and discussions. I don't want to talk in any detail about that. But that will continue.”

The fraud charges against Meng centre on a meeting she held in a Hong Kong tea room in 2013 with a senior HSBC banker.

Meng, who is Huawei's chief financial officer and the daughter of the Chinese telecom giant's founder, denies allegations that she put HSBC at risk of breaking U.S. sanctions during a PowerPoint presentation she gave that day.

But Frater accused Meng of making statements to the banker that "went to some length to demonstrate that Huawei had a rigorous approach to sanctions compliance, and that Huawei demanded the same of any partners working in Iran."

She neglected to tell the banker that Huawei controlled the company, Skycom, that was the subject of HSBC's concern, he said.

"It's about leaving an impression. And the message was received exactly as it was intended," Frater said.

Associate Chief Justice Heather Holmes' task in the extradition hearing is not to determine if Meng is guilty but to decide whether the United States has provided sufficient evidence to support a plausible case for such a verdict.

An extradition hearing is not a trial, but an "expeditious" proceeding to determine if a trial should be held, and weighing competing inferences is not a job for the extradition judge, Frater told the court.

In order to be extradited, the court must find that the conduct of the person would be considered a crime in Canada had it occurred in this country.

Even if Holmes rules Meng should be committed for surrender to the United States, the extradition isn't certain. The ruling can still face appeals and the final decision, under the Extradition Act, rests with Canada's justice minister.

The judge challenged Frater with many questions Wednesday, including a basic explanation of what, exactly, was being alleged in the records of the case provided by U.S. prosecutors.

"I will say I've had great difficulty understanding from the (records of the case) what it is about the commercial dealings of Huawei on the one hand and Skycom on the other that is said to have engaged U.S. sanctions," Holmes said.

She asked whether any business activity in Iran would violate sanctions or specifically U.S. "dollar clearing" of revenue generated in Iran, a distinction she didn't see clarified in the records.

Frater acknowledged that the records did not define legal commercial activities in Iran, but he suggested that Meng had indicated to HSBC she knew where the line lay and that HSBC would be safe from crossing it.

In the years since her arrest, Meng's legal team has launched a series of arguments seeking her release on grounds that she was subjected to abuses of process that have tainted the case.

They claim there were more than 30 instances of misconduct or abuse in her case, ranging from political interference by then-U.S. president Donald Trump, who indicated a willingness to intervene if it benefited U.S.-China trade negotiations, to intentionally poor note keeping by Canadian border officers and police involved in her arrest.

Holmes has not yet made a ruling on whether the allegations of abuse are valid. If she does, Meng's defence has argued for a stay in proceedings that would secure her release.

Meng's team is expected to respond to the government's extradition arguments beginning Friday and the hearing is set to wrap up by Aug. 20, although the judge may take months preparing a decision.