Economy front and centre on Day 1 of Canada's election campaign 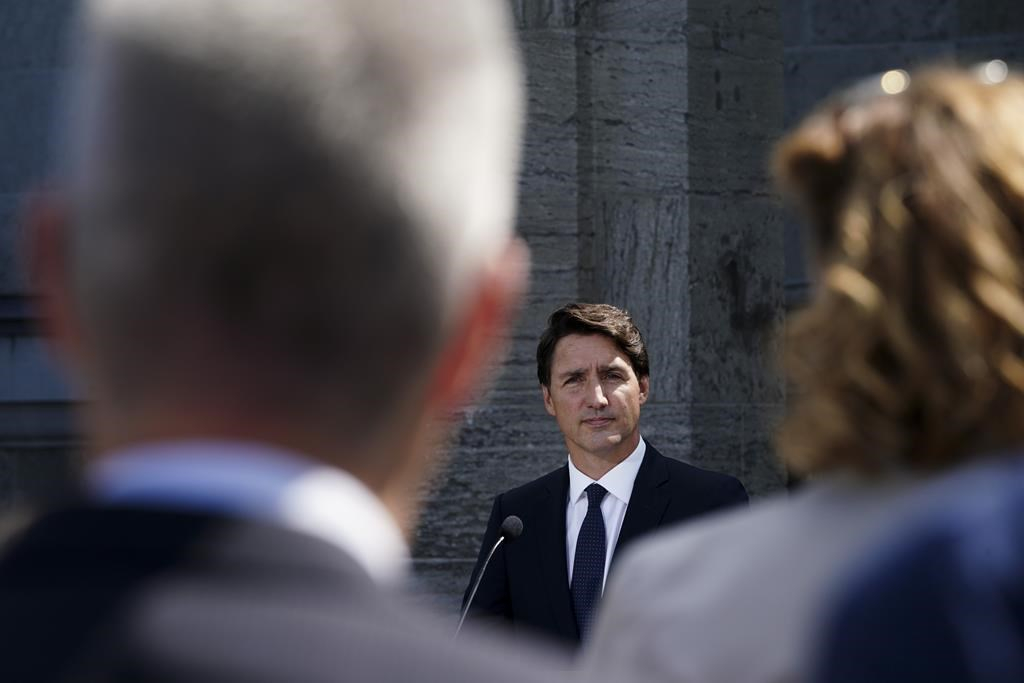 Reporters as questions as Prime Minister Justin Trudeau holds a press conference after meeting with Governor General Mary Simon and triggering an election at Rideau Hall in Ottawa on Aug 15, 2021. File photo by The Canadian Press/Sean Kilpatrick
Previous story
Next story

The federal parties took the first full day of campaigning to lay planks in their plans to revive the country's economy after months of pain from the COVID-19 pandemic, and options for covering the costs.

Unprecedented aid has flowed from federal coffers since the onset of the pandemic last year, which parliamentary budget officer Yves Giroux estimates will hit $352 billion in direct support by 2026 when all measures come to a close under existing plans.

Business groups said Monday their members were looking for a detailed road map for recovery, including targeted aid for businesses still smarting from public health restrictions through to next year and debt relief for small companies that piled on debt to survive the downturn.

The Liberals promised to extend a hiring credit first unveiled in their recent budget through to the end of March 2022. They also pledged to provide extra help to the hardest hit sectors like tourism and live theatre that are facing a steeper climb back to pre-pandemic levels.

"For hard-hit businesses who get the workers they need, to workers who get the jobs they need to support their families, this is a win-win," Liberal Leader Justin Trudeau said in Longueuil, Que.

Trudeau said the final bill would be dictated by how quickly the economy recovers and aid would no longer be needed.

Conservative Leader Erin O'Toole took the first full day of campaigning to lay out his party's full platform, which similarly aims to create jobs by spending in the immediately future, spur growth at levels above the budget officer's outlook, and balance the budget by 2031.

"We're making sure we put a recovery plan forward and that we're never again unprepared for a crisis or running massive deficits in good times like Mr. Trudeau," O'Toole said.

His plan also unwinds the Trudeau government's child-care system and replace it with a tax credit that O'Toole said would help low-income families cover up to 75 per cent of daycare costs. The pledge brought a sharp retort from Trudeau, argued the Conservative plan would hurt women.

Meanwhile, NDP Leader Jagmeet Singh promised to pry money out of the pockets of CEOs who saw their compensation rise even as their companies received federal business aid, adding to other New Democrat promises to tax the ultrarich to pad government revenues coming out of the pandemic.

"We can ask the wealthiest corporations, the super-rich to start contributing fairly to pay their fair share and we can invest that back into people."

But the day was also taken over by other issues, including the government's efforts to help Afghans who aided Canadian troops flee Afghanistan as the Taliban retook power, and mandatory vaccination rules for workers and travellers — signalling what may face the leaders between now and voting day on Sept. 20.

Bloc Québécois Leader Yves-Francois Blanchet spent the morning criticizing the inability of the Trudeau government to produce vaccines in Canada, saying that it was necessary for Quebec to have provincial production capacity rather than relying on foreign companies.

He also talked about the environment, telling reporters in English that it was necessary for Alberta to ween itself off of oil and gas with federal help.

"Solutions exist and we are willing to help and to accept the fact that more money would go there," Blanchet said, "because we are all going to pay, the whole planet, if nothing is done."

Similarly, Green Leader Annamie Paul called for an end to the construction of new pipelines, fracking, and oil and gas exploration so Canada could reduce greenhouse gas emissions and reshape the economy.