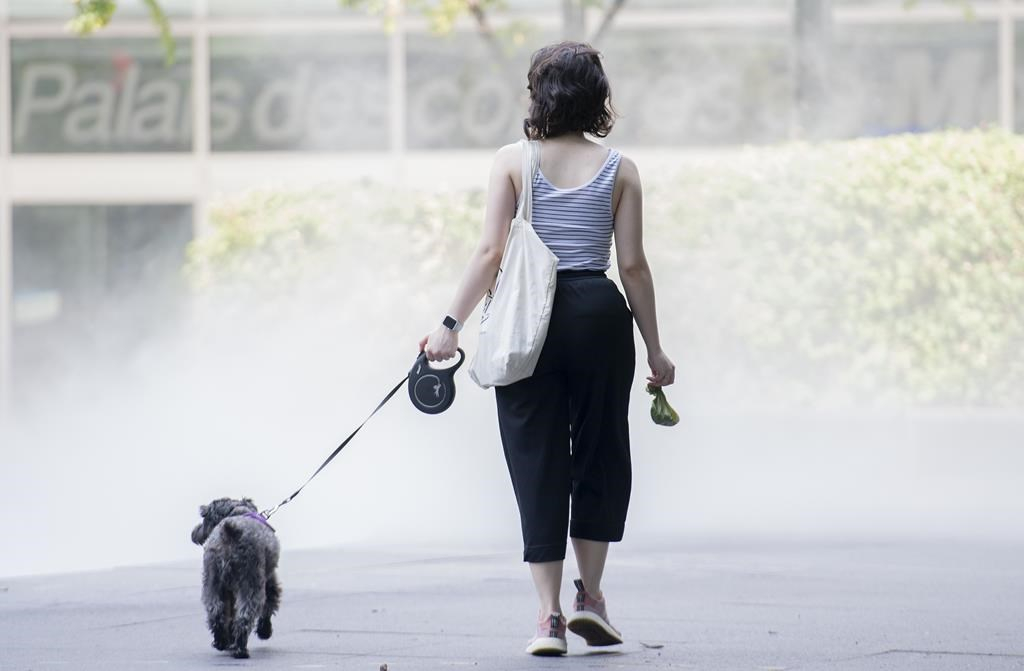 A woman walks her dog as mist rises from a water fountain in Montreal, on Saturday, Aug. 21, 2021. File photo by The Canadian Press/Graham Hughes
Previous story
Next story

A blistering heat wave seemed poised to set new temperature records in parts of Quebec on Sunday, prompting both the national weather agency and the province's premier to issue warnings about the effects of scorching conditions.

Environment Canada Meteorologist Simon Legault said widespread temperatures well above the 30 degrees C mark are above average for a time of year when average temperatures tend to hover in the mid 20s.

The recent run of hot weather, he noted, even toppled a heat-related record that stood for more than a century.

"Montreal broke the record set in 1916, where we saw more than three days with temperatures of 33 degrees," Legault said. "So heat waves are not unseen, but we are far above where we should be."

Temperatures as high as 35 C were recorded in downtown Montreal on Saturday.

Southwestern Quebec, meanwhile, has been experiencing a record-breaking heat wave since Friday which is set to affect the province until next week.

Environment Canada issued a new heat warning on Sunday, saying the province should expect daily humidex values to remain between 35 and 40 C until Thursday, noting the sweltering conditions can pose health risks for some vulnerable residents.

Quebec Premier François Legault issued a tweet on Sunday asking Quebecers to reach out to people living alone and make sure everyone was staying hydrated and safe.

"We need to protect our elders and those without air conditioners who are more vulnerable," the premier said.

The heat wave that has broken records in parts of Quebec over the weekend is expected to reach new historic highs on Sunday.

Temperatures are expected to be especially high in areas in and around Montreal, with humid conditions slated to pose an elevated risk of heat-related illnesses, such as heat stroke or heat exhaustion.

Simon Legault said while the abnormal temperatures are well above August's average of 24 and 25 degrees, the most recent heat waves are not unexpected given the effects of climate change.

"Climate changes which are already taking place are already impacting us," he said. "We see temperatures rising. Heat waves are now more frequent, more intense and on a longer period of days."

This report by The Canadian Press was first published Aug. 22, 2021.