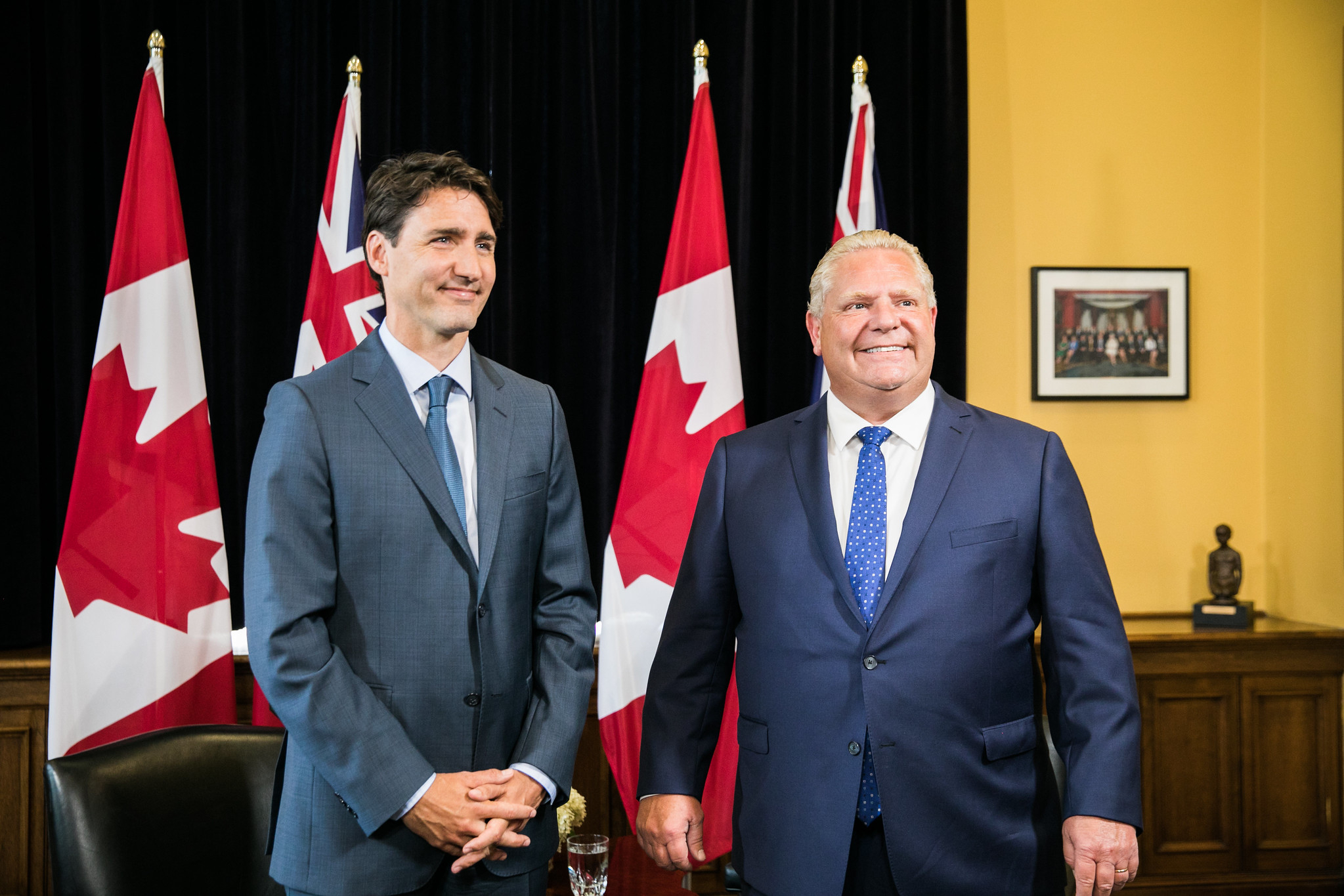 Ontario Premier Doug Ford (right) has ordered his ministers to refrain from posting about interactions with federal Conservative candidates on social media during the federal election. Photo by Flickr
Previous story

Last week, the Toronto Star reported that Justin Trudeau’s Liberals and Ontario Premier Doug Ford’s Progressive Conservatives had quietly agreed to a non-aggression pact and electoral truce for the Sept. 20 federal election. But Thursday, Ford upped the ante when his office issued an unusual decree mandating the premier’s cabinet ministers not campaign for federal leader Erin O’Toole’s Conservative Party for the remainder of the campaign. As part of the order, Ford’s ministers are to even refrain from posting about interactions with federal Conservative candidates on social media.

The reason given to Ford’s cabinet for the premier’s edict was that ministers have their plates full with their own files amid the pandemic’s deadly fourth wave. Thursday’s blunt directive, coupled with last week’s mutually beneficial non-aggression agreement, will alter the dynamics of this campaign in Canada’s most populous province. The declaration also served as a stark reminder that O’Toole and Ford are quite possibly the least aligned federal-provincial party counterparts in Ontario’s history.

What a difference two years and a global pandemic can make. In the 2019 election campaign, the rookie Ontario premier was Trudeau’s punching bag and political foil. Throughout that campaign, the prime minister attacked the deeply unpopular Ford on an almost daily basis. The political blowback Ford endured and was compounded by then Conservative Party leader Andrew Scheer’s refusal to utter the premier’s name on the campaign trail.

While Ford was deeply humiliated by the federal Liberal and Conservative parties throughout the 2019 election, he emerged as a stronger, battle-tested leader as a result. The recent Trudeau-Ford détente and Thursday’s directive are strong signals the premier will not place himself or his party in the crosshairs of another federal campaign. More importantly, they are a recognition Ford might well be quietly rooting for Trudeau’s Liberal Party in this election — even if he and his senior advisers steadfastly deny it.

The 2019 campaign dynamics in Ontario were a marked departure from an age-old political convention in this country whereby prime ministers avoid actively campaigning against provincial premiers come election time and vice versa. This convention has long been respected in Canada’s most populous province, where the prime minister and Ontario premier have represented different political parties for 52 of the last 58 years. The unwritten rule has strengthened Canadian federalism for decades, and forced first ministers of differing party stripes to work closely with one another for the country’s benefit.

The convention has endured for one practical reason — it’s far easier for first ministers to work intimately with their provincial or federal counterparts when they are not aggressively campaigning against one another every election cycle.

Many of Ontario’s premiers can lay claim to a distinguished record of working constructively with their federal counterparts on a variety of crucial federal-provincial files, particularly as it relates to constitutional reform. Unlike most premiers at the time, Ontario’s Bill Davis strongly supported Pierre Trudeau’s 1981 plans to patriate this country’s constitution from the United Kingdom and add to it the Canadian Charter of Rights and Freedoms.

Shortly after Davis left office in 1985, incoming Liberal premier David Peterson forged a similarly seminal relationship with prime minister Brian Mulroney. By 1987, Peterson had emerged as an ardent supporter of Mulroney’s proposed Meech Lake Accord, in spite of the fact much of his own caucus and cabinet at Queen’s Park strongly opposed it.

Since then, premiers Mike Harris, Ernie Eves, and Dalton McGuinty built practical relationships with prime ministers of different political stripes for the better part of two decades. While no observer would describe their relationships with prime ministers Chretien and Harper as especially warm, these three premiers worked closely with Ottawa throughout times of immense economic turbulence. Harris, Eves, and McGuinty also did not actively campaign for their federal counterparts during this period. For the most part, they resisted using Chretien and Harper as political foils — a favour that was largely returned.

In 2015, Premier Kathleen Wynne threw this long-standing convention to the wind when she opted to campaign enthusiastically for Trudeau in his quest to defeat Prime Minister Harper. It was a risky gambit ridiculed by critics at the time, but one that paid rich political dividends for Wynne when Trudeau formed a commanding majority government later that year.

The Trudeau-Ford détente and Ford’s extraordinary decision to bar his ministers from even interacting with O’Toole’s candidates, could impact the election’s dynamics in seat-rich Ontario, writes @andrewaperez. #cdnpoli #elxn44

The Trudeau-Ford partnership is one of the more intriguing first ministers’ relationships in recent decades, for it’s both asymmetrical and highly unpredictable. The relationship descended into downright aggression in 2019 when the Ford government took the Trudeau government to court over its ambitious federal carbon-pricing plan. The legal action was accompanied by a sweeping $4-million advertising campaign by the Ford government in an ill-fated attempt to turn public opinion away from the merits of carbon pricing.

But when COVID-19 hit in 2020, a hostile relationship transformed into what seemed like a partnership almost overnight. To their credit, Trudeau and Ford immediately recognized the unprecedented scale of the crisis would require them to set aside their differences to address Ontario’s severe economic and public health challenges.

For much of the pandemic, Ford consistently went to great lengths to praise the prime minister and his government’s management of the continually evolving virus. Throughout the first wave, the premier and Trudeau’s Deputy Prime Minister Chrystia Freeland even bragged to the media about their unlikely friendship, and how it was illustrative of their respective government’s newfound working relationship.

Since 2018, Ford’s relationship with Trudeau’s Liberals has steadily transformed into a transactional partnership cynically predicated on the direction the political winds are blowing at any given moment. Both men have cozied up to each other when it suited their mutual interests, yet neither has batted an eye when using one another as a political foil to boost their popularity.

The fact Ford’s party launched a campaign-style attack ad last May aimed at Trudeau’s government — for its alleged failure to halt new COVID-19 variants from crossing the border — is clear evidence of the mercurial nature of the Trudeau-Ford relationship. The tactic was universally panned as a desperate attempt to deflect attention from the premier’s poor handling of the pandemic’s third wave.

To further complicate matters, the relationship is not necessarily one of equals, as Ford likely needs the prime minister more than Trudeau needs him. The reasons for this are threefold.

First, Progressive Conservatives almost always rule in Ontario when the federal Liberals govern the country. Second, to secure a second majority mandate, Ford will need to draw significant support from Trudeau’s voter coalition. Finally, in recent years, the premier has increasingly governed as a pragmatist, adopting similar economic stimulus programs to that of the federal government. Last week, Ford’s government finally announced it would enforce mandatory vaccines for both its caucus and front-line workers in high-risk settings. Ford’s vaccine policy largely mimicked Trudeau’s federal proposal, with the intended effect of making the premier look eminently reasonable when contrasted with O’Toole’s party, which refused to mandate vaccines for its candidates in the campaign’s first week.

The final factor contributing to the premier’s probable support for Trudeau’s Liberals is his complete indifference to O’Toole. The cold reality is there is no love lost between the two men and their campaign operatives. Ford and O’Toole also have little in common, and owe each other no favours.

In the coming weeks, the Trudeau-Ford détente and Ford’s extraordinary decision to bar his ministers from even interacting with O’Toole’s candidates, will impact the election’s dynamics in seat-rich Ontario.

If Ford is nothing else, he is politically shrewd. He instinctively understands there is no upside for him with a Conservative government in Ottawa. As fickle as Ford’s relationship with Trudeau has been over the past three years, the premier knows this partnership has paid better political dividends than an O’Toole-Ford partnership could ever deliver. For this reason alone, the premier will likely be quietly rooting for a Liberal victory on Sept. 20.

Is there a method to Erin O'Toole's meme madness?

Doug Ford, the charter and what’s at stake

This could very well be

This could very well be standard for a provincial conservative party, at least in any province where the New Democrats (or any NDP predecessors) don't have much of a following.

It would come as zero surprise if the three conservative premiers in Atlantic Canada rooted for Trudeau. It's all just a cover-up for poor provincial fiscal policy by the blues.