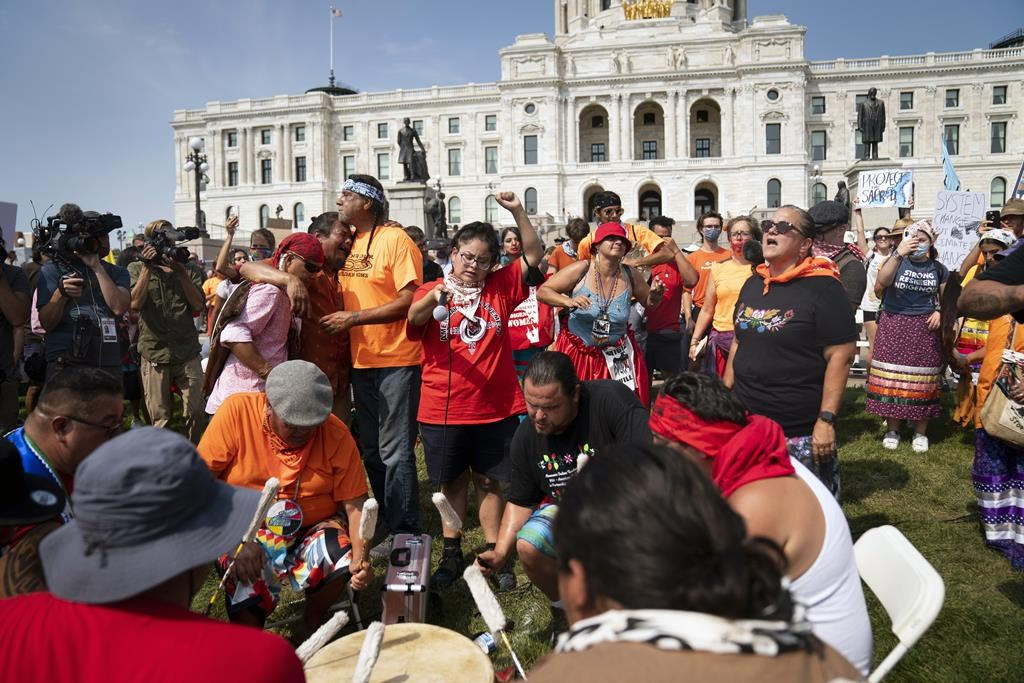 Water protector protesters dance and sing along to drumming during a protest against Line 3 and other pipeline projects at the State Capitol in St. Paul, Minn., on Wednesday. (Renee Jones Schneider/Star Tribune via AP)
Previous story
Next story

MINNEAPOLIS (AP) — The Minnesota Court of Appeals on Monday affirmed a decision by state pollution regulators to issue a water quality certification for Enbridge Energy's Line 3 crude oil pipeline, the latest setback for opponents who are trying to stop the project as it nears completion.

The appeals court ruled that the Minnesota Pollution Control Agency's approval was “supported by substantial evidence in the record.”

Under the federal Clean Water Act, the MPCA was required to certify whether the project met state and federal clean water standards. The MPCA concluded in November 2020 that it did. That certification cleared the way for the U.S. Army Corps of Engineers to issue the remaining federal permit for the pipeline replacement less than two weeks later.

Two tribal governments and three environmental groups challenged the MPCA's decision on several grounds, asserting that the state agency failed to consider alternative routes and improperly determined that the project would comply with state water quality and wetlands standards. The MPCA and Enbridge argued that the appeal was moot because the Army Corps of Engineers had already approved the final permit.

The appeals court said the challenge was not moot because it wasn't the court's role to predict how the Corps might react to a reversal of the MPCA's decision, but it found that the state agency had met its legal requirements.

The tribal and environmental groups fighting the project argue that the Canadian tarsands oil the replacement will carry from Alberta to Enbridge’s terminal in Superior, Wis., will worsen climate change and risk spills into waters where Native Americans harvest wild rice. Line 3 was built in the 1960s and runs at half its original capacity because it’s subject to corrosion and cracking. Enbridge says it needs to replace the current pipeline to ensure reliable oil deliveries.

Enbridge said in a statement that the ruling was confirmation "that wetlands and waterbodies are being appropriately protected’ during construction, which it said is “nearly complete” in Minnesota. The Canadian, North Dakota and Wisconsin segments are already finished. The Calgary, Alberta, company plans to put the new line into service in the fourth quarter.

“Replacing existing Line 3 is about safety and maintenance,” the company said. “Upgrading an aging line with new pipe made of thicker steel with technologically advanced coatings will better protect Minnesota’s environment for generations to come.”

Line 3 opponents have staged ongoing protests along the construction route across northern Minnesota this summer, and outside the state Capitol and the official governor's residence in St. Paul last week, demanding that President Joe Biden step in and reverse the Corps' decision to grant the federal permit. The opponents are fighting that permit in federal court, in one of the few remaining legal challenges available to them. The Minnesota Supreme Court last week declined to hear a challenge to the decision by the state's independent Public Utilities Commission that let construction proceed.

“MPCA’s approval of the permits for Line 3 put Minnesota’s waterways at risk, and we can already see the resulting damage as Enbridge has already had dozens of drilling fluid spills during the course of construction," Margaret Levin, director of the Sierra Club's Minnesota chapter, said in a statement. "It’s disappointing that the court will not hold MPCA accountable for their failure to protect our clean water, and now it’s more urgent than ever that President Biden step in, live up to his commitments to climate action and environmental justice, and stop Line 3.”

The Minnesota Court of Appeals on Monday affirmed a decision by state pollution regulators to issue a water quality certification for the #Line3 crude oil pipeline, the latest setback for opponents who are trying to stop the project. #Enbridge

According to an opposition count, nearly 900 “water protectors” have been arrested since major construction began last December, including 69 during a protest Saturday outside the home of Democratic Gov. Tim Walz, who recently expressed support for the project going forward despite having supported earlier appeals against it.