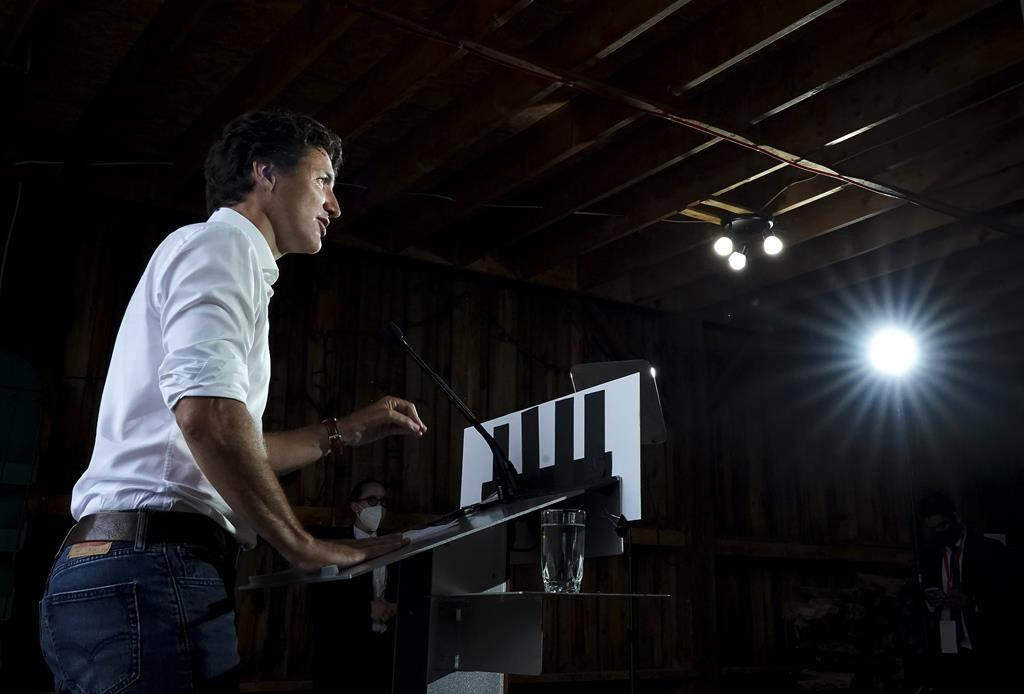 Liberals and Conservatives took aim at each other's candidates on Monday, questioning past statements and actions to build a character case about why they, and not their opponent, should be trusted to govern after election day.

The Conservatives started the day by questioning tax arrears that Liberal candidate Steven Guilbeault disclosed in a parliamentary ethics filing, which the heritage minister later explained to reporters travelling on the campaign stem from his separation and are being resolved.

Guilbeault, likewise, used a series of posts on Twitter to highlight just over a dozen Conservative candidates who deny climate change, calling leader Erin O'Toole's party a home of "dinosaurs."

1/15
Erin O’Toole has made the Conservative party a home for dinosaurs. These examples are just scratching the surface of the climate change denial rampant in his party.

And not long after, a Conservative candidate in Nova Scotia withdrew from the federal election after an allegation of sexual assault, which he denied, surfaced on social media.

Liberal Leader Justin Trudeau, speaking in Granby, Que., said Conservative Leader Erin O'Toole should be careful about slinging mud at Liberal candidates because of myriad issues with some Tory candidates.

Trudeau referenced longtime Conservative MP Cheryl Gallant in his comments to reporters, who in pre-election correspondence to her constituents claimed the Liberals were in favour of a "climate lockdown."

"It's probably a very dangerous path to walk for Mr. O'Toole to start trying to attack other people's candidates when we see that his own candidates won't even confirm that they're getting vaccinated," Trudeau said after outlining a plan to help restore Canada's big lakes and river systems.

"His own candidates are out there peddling conspiracy theories on vaccinations and, as we saw recently with Cheryl Gallant, on the environment."

Gallant on Sunday was forced to scrub an online video that included a cropped picture of Trudeau appearing to have some sort of noose around his neck. O'Toole didn't directly explain if Gallant would face repercussions.

Instead, he repeatedly said that Conservative candidates were running on the party's platform, which includes proposals to address climate change.

"All of our candidates are committed to the plan. It's exactly what the country needs," O'Toole said after announcing a plan to crack down on puppy mills.

"Everyone will be focused on that plan and a positive campaign."

The series of events and comments framed the start of the third week of the federal campaign and all landed hours before the deadline for candidates to file their nomination papers with Elections Canada to get their names on the ballot for the Sept. 20 vote.

The Conservative candidate for Dartmouth-Cole Harbour, Troy Myers, stepped down from the race on Monday morning hours after a woman posted a series of tweets alleging Myers had put his hand up her skirt while the two were attending a conference in Nova Scotia in October 2019.

Myers said on Facebook the allegation is unequivocally false and he intends to challenge what he called defamatory statements.

Neither Myers nor the woman could be reached for comment.

O'Toole said his party takes any allegations of sexual misconduct or harassment very seriously and shows support for victims, which is why Myers is no longer a candidate.

Asked if the same would happen to a Liberal candidate, Trudeau said every situation is different and needs to be addressed with a proper process.

"But absolutely, Canadians deserve to know the people standing up to represent them to serve them in the House of Commons are not people who have shown disrespect or misbehaviour or are facing serious allegations," he said.

Trudeau was dogged over the weekend by obscenity-spewing protesters angry about his pandemic policies, particularly on vaccination mandates, and at times effectively calling for the Liberal leader to die.

The protests have become an ignominious addition to the campaign trail that the party leaders have denounced.

NDP Leader Jagmeet Singh said there is a fine line between attacking a political opponent personally and going after them for policies.

He said New Democrats would continue to criticize Trudeau for policies that Singh said have helped the Liberals politically even if they have cost students or homeowners financially.

"I don't believe in attacking someone just because I don't like them or because they're bad. That's horrible and shouldn't happen," Singh said in Ottawa after promising to boost spending at the Canada Revenue Agency to help crack down on "ultrarich" tax dodgers.

This report by The Canadian Press was first published Aug. 30, 2021.