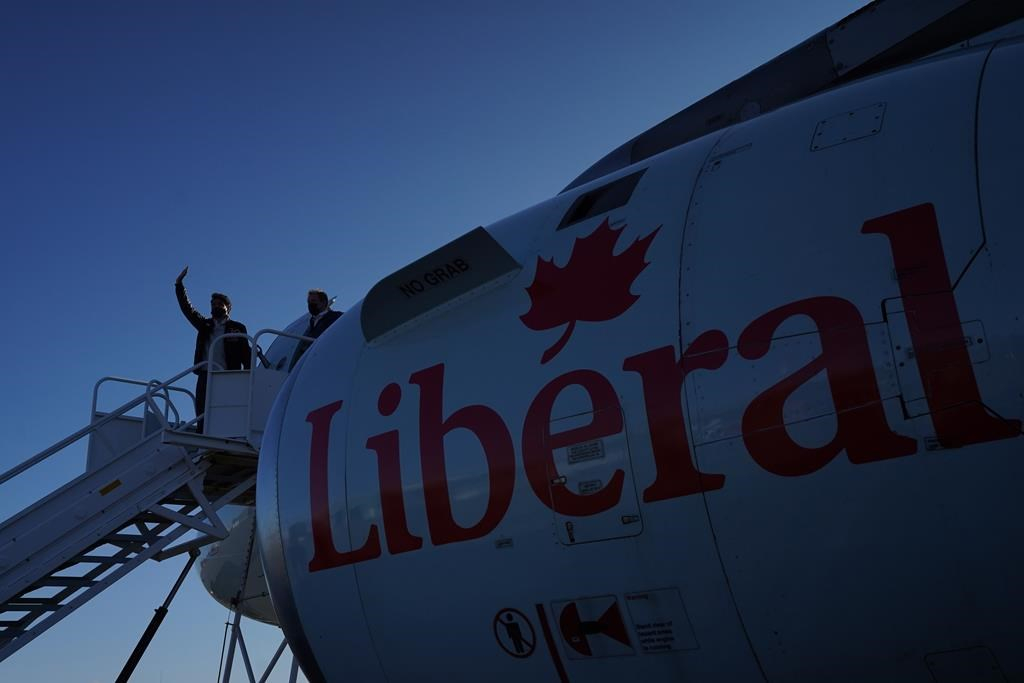 Liberal Leader Justin Trudeau waves from the steps of his campaign plane as he arrives in Iqaluit, Nunavut on Monday, August 30, 2021. File photo by The Canadian Press/Nathan Denette
Previous story
Next story

Liberal Leader Justin Trudeau faced broadsides for his government's efforts to make housing affordable and his handling of the economy that contracted just ahead of the election call.

Affordability has already emerged as a key election talking point among the major parties, and it landed back on the campaign trail alongside the economy on Tuesday.

Statistics Canada reported the economy contracted at an annualized rate of 1.1 per cent between April and June, and estimated another drop in real gross domestic product in July.

Speaking in the Ottawa suburb of Kanata, Trudeau said there are pockets of the economy that remain weak, pointing to arts and culture as an example, even as he argued the economy overall was roaring back.

It's why, he said, emergency supports have dropped in value, even though the Liberal government extended their lifespan through the fall because of weaker-than-expected economic indicators.

He also argued that Conservative plans for child care, among other proposals, would hurt the pace of the economic recovery if women aren't able to enter the workforce in greater numbers.

Trudeau didn't directly say if he foresaw a time, if re-elected, that he may have to adjust federal spending to prevent spiralling deficits.

After eking out a gain in June to end the second quarter of the year, the economy appears to have contracted in July and left overall economic activity about two per cent below the levels seen prior to the pandemic in February 2020.

Speaking in Ottawa, O'Toole said the figures show the country is "heading further down the road of recession, not the road of recovery" under the Liberals, vowing to wrangle deficits over a decade to balance the books.

Pressed for details on where he would cut spending, O'Toole said he wouldn't cut at all and suggested something the Conservatives have long hammered Trudeau over — that the budget would balance itself.

"We will grow the economy so that we can get back to balance in a responsible and equitable way without cuts. That is our plan," he said.

Perceptions of the economy often come down to what individuals see in their day-to-day lives, such as whether businesses in their community are opening or closing, and how their peers are faring financially.

In Coquitlam, B.C., NDP Leader Jagmeet Singh looked to capitalize on that by outlining his plan to increase the capital gains tax on house flippers as a plank in making housing costs more affordable.

Statistics Canada noted Tuesday that Canadian households took on $84.2 billion more in mortgage debt over the first half of 2021, adding to the $62.3 billion in the last half of 2020 as the housing prices soared amid low supply, high demand, and rock-bottom interest rates.

A cooling housing market was part of the reason why the economy didn't fare as well as expected over the last few months, but Singh argued his plan wouldn't further affect long-term growth.

"It's about the type of economic growth that we want," he said.

"We don't want economic growth to be driven by rich investors that want to make profit off of housing, or foreign investors that see an opportunity to invest in our Canadian housing market, driving up the cost of housing for Canadians who can't afford a home."

Also causing problems with the economy were supply-chain issues that don't yet look to have abated.

Green Leader Annamie Paul proposed to cut down on food imports by one-third and replace them with more domestic production, which she said would help rural economies and improve food security.

"An overreliance on global supply chains will necessarily mean that there is a compromise, there is a threat to our sovereignty and our national security," she said in Toronto.

The dual attacks on Trudeau from Singh and O'Toole landed as a new poll suggests Conservatives and New Democrats have momentum heading into the second half of the federal election campaign, while the Liberals are bleeding support.

Thirty-four per cent of decided voters who took part in the Leger survey said they support O'Toole's Conservatives — ahead of the Liberals and up four percentage points since Aug. 16, when the campaign got underway.

Support for Singh's New Democrats is also up four points, to 24 per cent, support for Trudeau's Liberals is down five points to 30 per cent, and Green party support is down three points to two per cent.

In Quebec, support for the Bloc Québécois stands at 29 per cent, behind the Liberals at 33 per cent.

The online poll of 2,005 Canadians, conducted Aug. 27 to 30 in collaboration with The Canadian Press, cannot be assigned a margin of error because internet-based polls are not considered random samples.