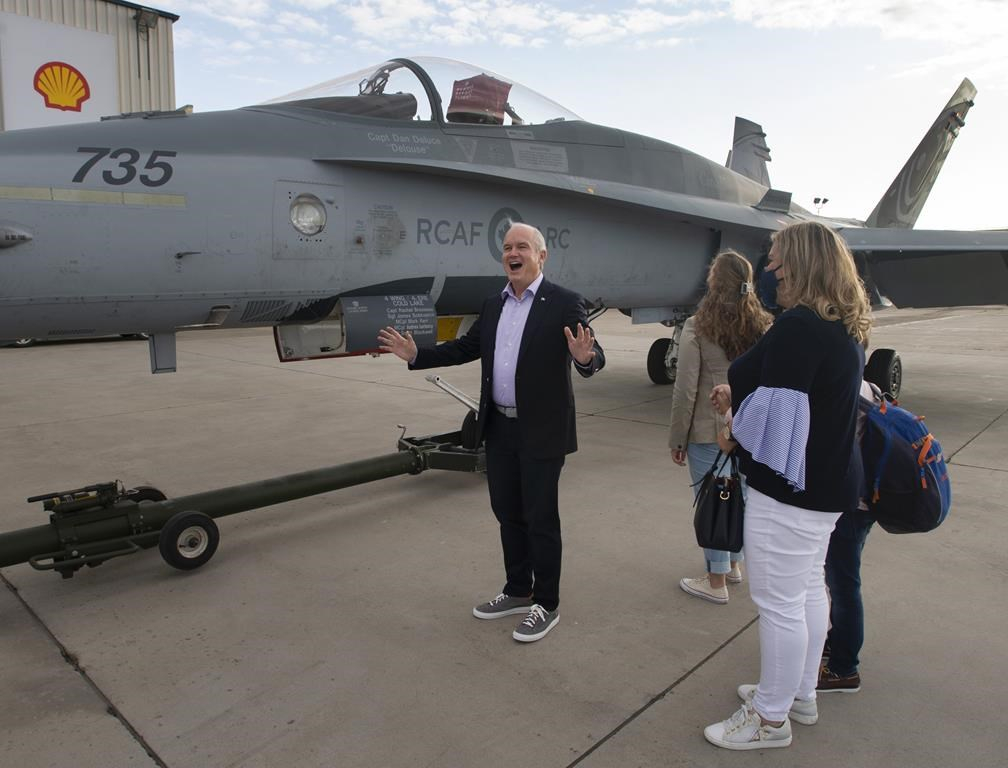 Conservative Leader Erin O'Toole, his wife, Rebecca, and their children check out a CF-18 Hornet parked near their campaign plane as they arrive in Edmonton, on Saturday, Aug. 21, 2021. File photo by The Canadian Press/Ryan Remiorz
Previous story

OTTAWA — Two of the four leaders set to face off tonight in the first televised debate of the federal election campaign went out ahead of the event to drum up support.

The French debate on TVA, one of Quebec's most-watched networks, comes at the mid-point of the campaign and could prove crucial to the outcome on Sept. 20.

The Green party's Annamie Paul and the Peoples' party's Maxime Bernier were not invited to participate.

The TVA debate was seen as pivotal in the 2019 campaign.

Then-Conservative leader Andrew Scheer's evasiveness on the issues of abortion and medical assistance in dying was widely seen as halting early Conservative momentum, ultimately enabling Trudeau's Liberals to eke out a minority win.

The performance of Blanchet, a newcomer to federal politics at the time, was also credited with giving new life to the Bloc Québécois, which helped rob Trudeau of a second majority mandate.

Blanchet and O'Toole had no public events in the hours leading up to their debate, which will also be a first for O'Toole as Conservative leader.

He stopped at one point to buy smoked meat sandwiches for his team and latkes for himself. A worker from another business came out to give Trudeau Portuguese custard tarts.

Trudeau — who was flanked by six candidates, including cabinet ministers Steven Guilbeault and Melanie Joly — encountered a largely friendly crowd on Thursday. He was heckled once by a passerby and again by two patrons on a restaurant patio.

Singh handed out samples of his personal recipe for "Punjabi poutine" from a custom truck that almost didn't make it after a wheel fell off — something the New Democrats hope doesn't happen to their campaign in Quebec.

The province in 2011 helped make the NDP the Official Opposition, but in 2019 they lost all but one seat there.

The NDP leader told reporters that his strategy going into the debate was to target Trudeau and the Liberal government's policies and paint a stark choice for voters.

"They can choose another four years of Justin Trudeau, who has made all the things that people care about in Quebec worse — the housing crisis, environmental crisis, those have become worse with Justin Trudeau — or they can choose New Democrats, who have shown that we fought for them," Singh said.

"And we will continue to fight for them, and we'll make sure that we solve the problems that people need solving."

Paul will participate in those debates, but Bernier, who didn't meet the independent commission's criteria for participation, will not.

The TVA debate involves a series of face-to-face encounters between two leaders at a time, allowing for sharper and longer exchanges.

- With files from Paola Loriggio

Does Erin O’Toole’s surge signal the return of Red Toryism?