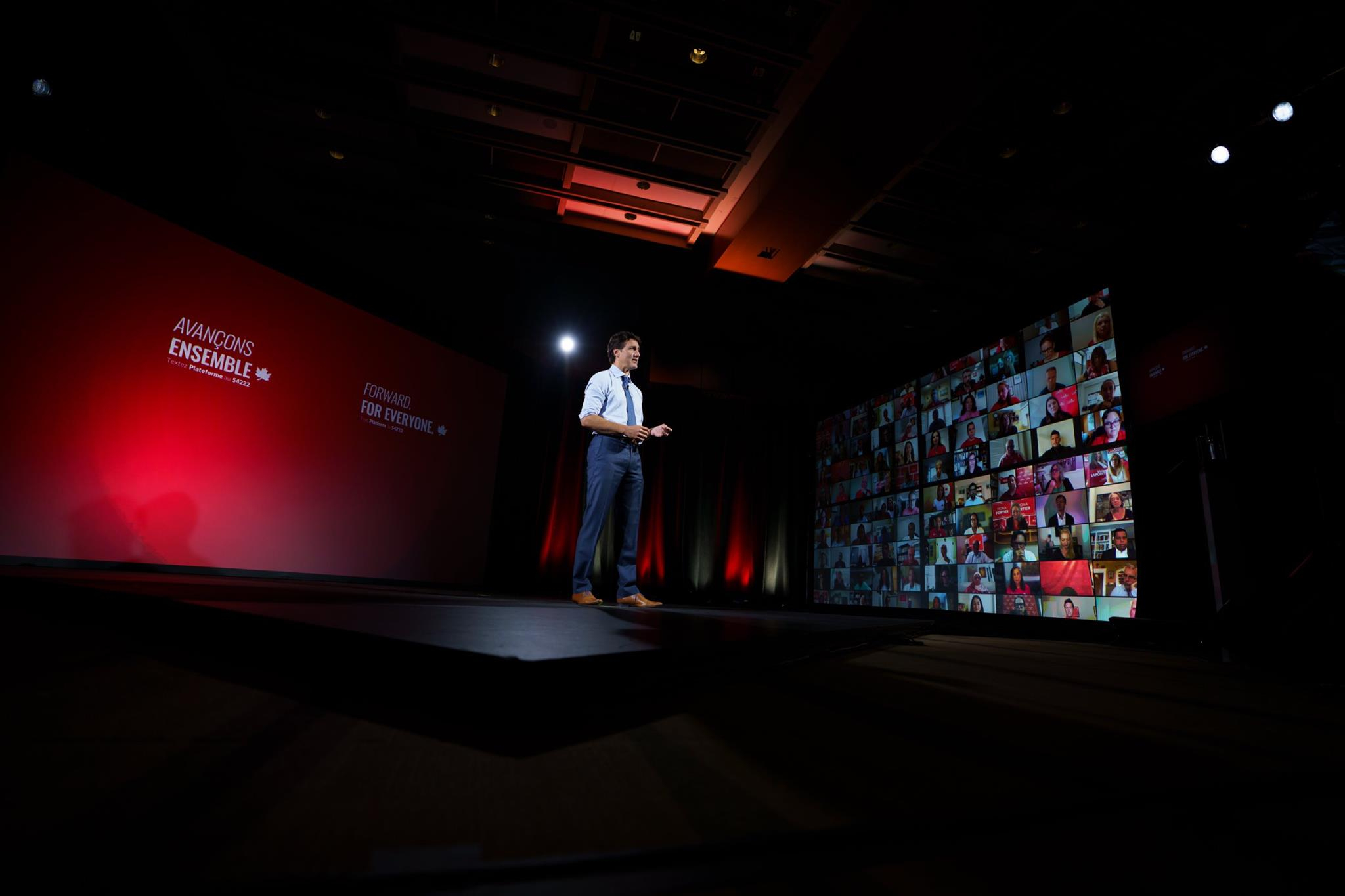 Liberal Leader Justin Trudeau unveiled his party’s platform Wednesday, with more than $78 billion in new spending over the next five years. Photo via Trudeau / Facebook
Previous story
Next story

Of the new funding pledged, approximately $7.4 billion is planned over the next five years for climate initiatives ranging from electric vehicle infrastructure, to energy-efficient retrofits, to a just transition fund.

Then there’s the less tangible. The platform is complete with promises to phase out fossil fuel subsidies; develop climate-friendly transportation, procurement, and adaptation strategies; and expand the office of the National Security and Intelligence Adviser into the world of climate change.

“This is the plan that’s going to bring Canadians forward to end this pandemic, to invest in growth as we fight climate change and create jobs, and make sure we’re giving women the opportunity to get back into the workforce by ensuring $10-a-day child care right across the country,” Trudeau told reporters.

University-Rosedale incumbent candidate Chrystia Freeland also spoke to the platform, calling it fiscally responsible and highlighting that its “10 or so” major planks had been costed by the Parliamentary Budget Office (PBO). She added that while some promises reach out to 2030 and beyond, it was a deliberate choice to cost the policies over five years because that’s a government budgeting standard, and there are simply too many variables to confidently say what the country’s fiscal position would be after that.

“Do we want to build a green economy so we can continue to sell things to other people, or do we want to fall behind?”

The platform says Liberals would collaborate with the United States and the European Union on implementing a border carbon adjustment — essentially a carbon tariff — in order to push emissions down in international trade. There is no solid commitment, but the platform says Liberals would consider border carbon adjustments on imports of steel, cement, aluminum, and other high emission industries.

One competitive advantage Canada has is that its power grids are already relatively clean. The Liberal platform says, if re-elected, it would introduce a clean electricity standard to have a 100 per cent carbon-free power grid by 2035. Moreover, the Liberals are promising to create a pan-Canadian grid council to “promote” better integration among regional grids. In other words, the council would aim to beef up transmission lines to move hydropower and renewables to regions still using coal, gas, or other fossil fuels to generate electricity.

“Our electricity grid is already 83 per cent zero-emission, and what we can do with that is plug it into more things,” said Clean Energy Canada executive director Merran Smith. That means connecting the power grid to “our mines, battery manufacturing, (and) our auto sector so that we are using our clean electricity to produce low-carbon products for export.”

“We have a competitive advantage, but we need to build on it and Canada has lots of potential for solar, wind, and other renewable energies,” she said.

The platform says a re-elected Liberal government would “accelerate our G20 commitment to eliminate fossil fuel subsidies from 2025 to 2023,” and “develop a plan to phase out public financing of the fossil fuel sector, including from Crown corporations, consistent with our commitment to reach net-zero emissions by 2050.”

“The Liberals have been in power for six years and I would say their progress on fossil fuel subsidies has been quite slow …When we did a comparison of all G20 countries, we found that Canada was actually the slowest of the OECD countries to be phasing out support for fossil fuels,” she said.

“The platform essentially accelerates the commitments so that we have said that we will be in a position to say that we've eliminated all of those by 2023.”

It’s not clear how exactly that will be achieved, says Corkal.

“In their costing, they've only listed one measure that I can see, which is eliminating flow-through shares for the oil and gas sector,” she said. “The devil will be in the details.”

“If you're drilling a well looking for a resource, you'll either find something or you won't, and if you don't find something then essentially you've lost the value of that well, and so (government) allows for a 100 per cent writeoff of drilling wells for exploration,” said Richard Masson, a former oilsands policy adviser to the Alberta government and an executive fellow at the University of Calgary’s School of Public Policy.

Masson explained that policy has been in place for decades as a way to help usually Canadian-owned junior oil and gas companies. Essentially, if a company drills a $5-million well and comes up empty-handed, a lot of companies wouldn’t have $5 million of taxable income to deduct against, he said.

Government “allowed for those expenses to flow from the company through to the shareholders, and then the shareholders, which could be mutual funds, or executive management teams ... they can claim those flow-through expenses on their personal income taxes and reduce their tax burden,” Masson explained.

“Because that type of share is tax-attractive, that helps those small companies sell shares and raise money to drill wells.”

Liberals say eliminating flow-through shares will generate $26 million in new revenue over the next five years. Specifically, Liberals expect $2 million in 2022/23 and $8 million in the years after.

— With files from Natasha Bulowski

"Of the new funding pledged,

"Of the new funding pledged, approximately $7.4 billion is planned over the next five years for climate initiatives ranging from electric vehicle infrastructure, to energy-efficient retrofits, to a just transition fund."
The Liberals' left hand does not know what the right is doing:
April 2021 report from Environmental Defence: Paying Polluters: Federal Financial Support to Oil and Gas in 2020
The federal government announced various supports totalling almost $18 billion to the oil & gas sector in 2020. Meanwhile, its climate plan has earmarked $15 billion for climate initiatives over 10 years.
https://environmentaldefence.ca/2021/04/15/paying-polluters-much-canada-...
If the Liberals' commitment to climate action were real, they would abandon the Trans Mountain Expansion Project; withdraw Coastal GasLinks permits; and cancel BC's new LNG plants. Canada would also start reporting its oil & gas emissions accurately.
Not going to happen.

"Where They Stand: The

"Where They Stand: The Parties on Climate Change"
"In 2016, Prime Minister Justin Trudeau pledged to end fossil fuel subsidies by 2025. But between 2015 and 2019, subsidies increased by 40%, which is the second-worst progress in all the G20, according to a BloombergNEF report."
https://thetyee.ca/News/2021/08/31/Where-Parties-Stand-Climate-Change/

Geoffrey Pounder, thank you for your reply, with which I agree completely. I suspect that Trudeau continues to waffle so he can win a majority that would be able to take some of the tough measures Canada needs to take. But will I gamble my vote on that suspicion?

The problem with the Liberals

The problem with the Liberals isn't that they don't put nice things in their platform, or say nice things, or promise nice things. The problem is they don't do most of them.
The cloying smarmy dishonesty got so annoying that recent iterations of the Conservatives have been able to get elected by promising to kick you in the groin and then once elected actually doing it, and people would be rolling around in pain saying "But at least they're being honest!"
Of course the bloom has faded from that particular rose so O'Toole is now campaigning like a Liberal. But it's freaky that it could actually work for a while.