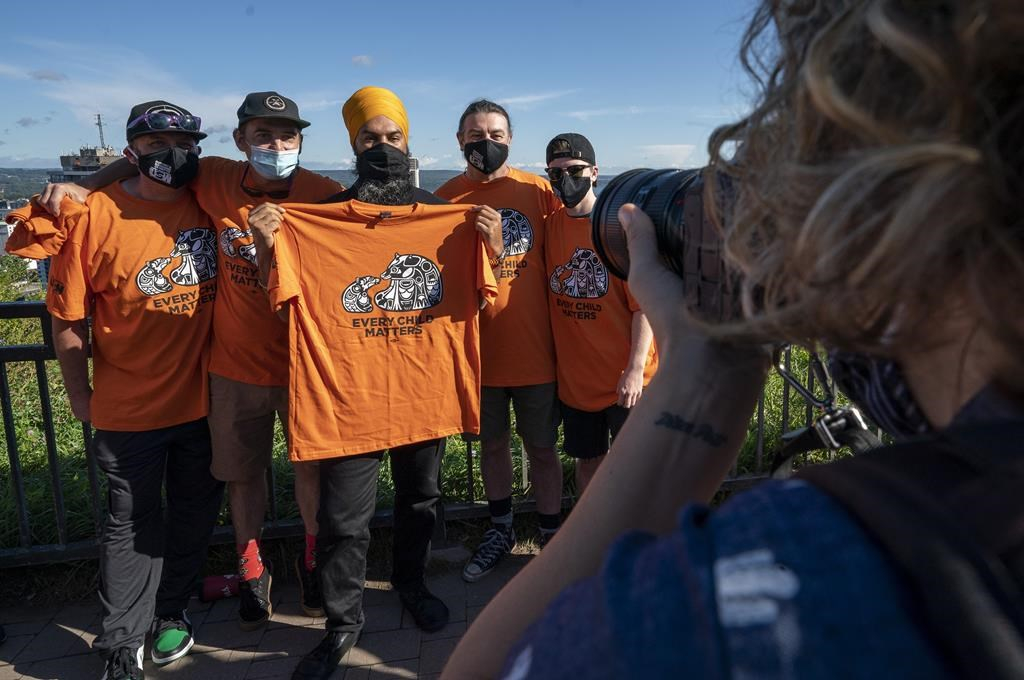 NDP Leader Jagmeet Singh gets his picture taken as he is presented with a t-shirt in support of Indigenous children and residential school survivors during an election campaign stop in Hamilton, Ont., on Sept. 6, 2021. Photo by The Canadian Press
Previous story
Next story

Liberal Leader Justin Trudeau, Conservative leader Erin O'Toole and Jagmeet Singh of the NDP all focused their campaign efforts in vote-rich Ontario, with Trudeau saying his party would table legislation, if re-elected, to provide legal protection for businesses asking for proof of COVID-19 vaccination from staff and customers.

During a campaign stop in Welland, Ont, Trudeau also promised to expand hiring and workers' support programs his government introduced during the COVID-19 pandemic, as well as a tax credit for construction workers who travel or relocate for employment.

"We'll extend the Canada recovery hiring program, which makes it easier not just to hire people, but to boost wages to address the labor shortage some sectors are facing," he said, reiterating a pledge made last month to extend the program until March 31, 2022.

Trudeau highlighted his government's record of providing a wage subsidy for businesses so they could keep workers on their payrolls during the pandemic.

He also tried to position himself as a friend to the business community by touting his government's efforts to stand up for Canadian economic interests during former U.S. President Donald Trump's tenure in the White House.

"When the Americans imposed steel tariffs, we hit back, dollar for dollar. That's why Donald Trump stood down," Trudeau said.

O’Toole, for his part, repeated an earlier pledge that his party would double the Canada Workers Benefit up to a maximum of $2,800 for individuals or $5,000 for families if elected on Sept. 20.

Speaking to reporters in Ottawa, the Conservative leader said the measure would help up to 3.5 million families, noting that the increase would amount to a raise of $1 per hour for someone earning between $12,000 and $28,000 per year.

"Not only will we double the benefit, we will pay four times a year, as a direct deposit," he said.

Currently, eligible workers can receive up to half of the credit in quarterly advance payments.

O'Toole also repeated a promise that a Conservative government would double the disability supplement from $713 to $1,500, noting the increase would help families at a time when the cost of living is rising.

"If you're working hard to provide for your family, I'm going to have your back. And I want you to have more money to tackle the rising costs of living that is out of control," O'Toole said.

Singh campaigned in the traditional party stronghold of Hamilton-Centre, where he said his party is committed to $10 universal child care, as well as a $20 minimum wage and 10 days of paid sick leave for federally regulated workers.

"We know that women were disproportionately impacted by the pandemic, and so our response, coming out of this pandemic has to acknowledge those who've been hardest hit," he said.

Singh said that while the Liberals have also made promises on a childcare program and paid sick leave, the party didn't pass these measures when they had the opportunity.

None of the labour-related promises addressed issues concerning the emerging gig economy, a subject the head of the Canadian Labour Congress said should be a top priority for whoever forms government after the Sept. 20 election.

Bea Bruske, speaking prior to Labour Day, said the next government needs to better protect the country's gig workers by giving them access to the social safety net and employee protections.

Federal officials are currently reviewing the employment insurance system, and the place of gig workers in that system has emerged as a thorny issue. Officials are wrestling with how to calculate premiums and benefits for gig workers, as well as how to determine when someone needs aid given the sporadic nature of such jobs.

Bruske said whoever forms government after the election needs to give gig workers access to the Canada Pension Plan and employment insurance system.

She also said changes are needed to give gig workers the same rights as other employees under both employment standards legislation and health and safety rules.

"We believe that they need to be classified as workers and be enshrined as employees and therefore have rights and privileges like any other employee would have," she said.

New Democrats typically have relied on unions for support at the ballot box, but the Liberals have attempted to forge close ties with labour groups since 2015, and the Conservatives are also attempting to woo workers in this campaign.

Government figures showed the economy added 94,000 jobs that month as public health restrictions continued to be lifted, sending the unemployment rate to its lowest level since March of this year at 7.5 per cent.

But the gain still left the country 246,400 jobs, or 1.3 per cent, shy of pre-pandemic employment levels.

This report by The Canadian Press was first published Sept. 6, 2021.

For climate’s sake, Canada Pension Plan needs to take a serious look at its investments