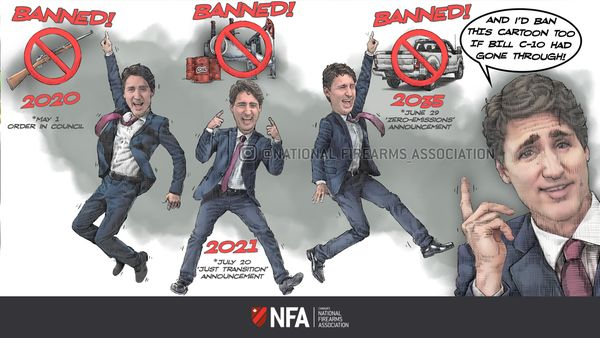 The federal Conservative Party is distancing itself from a controversial firearms lobby group to dispel attacks from the Liberals painting it as a party that strikes deals with gun lobbyists. It even amended party policy to say that, if elected, a Conservative government would keep the Liberal gun restrictions and complete a review of those rules.

Canada’s National Firearms Association (NFA) is an advocacy group representing firearms owners and is registered as a third party with Elections Canada.

In a recent video, NFA president Sheldon Clare said the association has a “pretty solid relationship” with the Conservative party and hopes that will continue on Sept. 21, calling on viewers to “get these guys out of opposition and into government.”

The NFA is active on Facebook and has been running attack ads primarily geared at voters in Ontario and Alberta.

Although the Conservative Party is distancing itself from the NFA and has softened its position on gun restrictions, the NFA is not concerned about Erin O’Toole’s new stance and runs ads taking aim at Liberal Leader Justin Trudeau.

The ultimate goal of the NFA’s political ads and involvement is to see the Liberals removed from power and replaced by, at the very least, a Conservative minority, Sheldon Clare, president of the NFA, told Canada’s National Observer.

A recent ad reads, “Trudeau has to go.”

According to Clare, these cartoon-style ads seem to be “one of our most effective operational efforts” and said there will likely be more in the near future.

Strategies with negative messages — like those the NFA has been using — tend to be very effective, said Noah Schwartz, an assistant professor of political science at Concordia University and author of Guns in the North: Social Identity and Firearms Advocacy in Canada.

“But it means that the article or the ad travels further.”

Although some ads, like the one above, contain specific references to firearms-related issues, many are broadly anti-Trudeau and don’t directly mention firearms.

These anti-Trudeau ads are likely effective at motivating people in the gun community because “people sort of feel like they've been stereotyped and mistreated and used as scapegoats by the Trudeau government,” said Schwartz.

In an emailed statement, Liberal Party spokesperson Alex Deslongchamps said, “In his bid for the Conservative leadership, Erin O’Toole made specific promises to the gun lobby. Clearly, they took him at his word.”

An NDP spokesperson said, “In an era of misinformation and heightened political rhetoric on social media, it is critical that political advertising is respectful, factual, and does not promote violence. For the NDP, adhering to these principles is part of our commitment to raising the bar of political discussions in Canada, and to treating everyone with respect, no matter their political affiliation.”

Despite O’Toole now saying he would maintain the current Liberal gun restrictions and complete a review, Clare said he is not concerned.

“Mr. O'Toole is committed to have a review of the Firearms Act, and in an evidence-based review, we're quite confident that our positions will prevail,” he said.

The Conservative Party’s move to distance itself from the NFA is “pretty typical,” according to Schwartz, who added the issue of firearms restrictions is too complicated to properly articulate during an election dominated by one-liners, and that O’Toole’s change of stance will prevent it from becoming a wedge issue this election.

O’Toole’s decision to reverse course could result in some blowback and perhaps drive some supporters to the People’s Party of Canada (PPC), but Schwartz said it is still too early to tell.

Whether the gun community accepts O’Toole as its best shot and rallies behind him, stays home, or defects to the PPC (which has a strong pro-gun, anti-control platform) remains to be seen, said Schwartz.

He said these factors could have an impact in swaying the election.

Clare said the NFA has contacted millions of potential voters and is “getting very positive feedback.”

“Anyone who engages in thinking that there is going to be any other government besides either a Liberal or a Conservative one is mistaken, and anyone putting their votes towards anything besides a vote that will defeat Liberal candidates is guaranteeing that there will be more Liberal gun control legislation coming down the pipe,” said Clare.

Liberals play up difference with Conservatives on abortion and guns