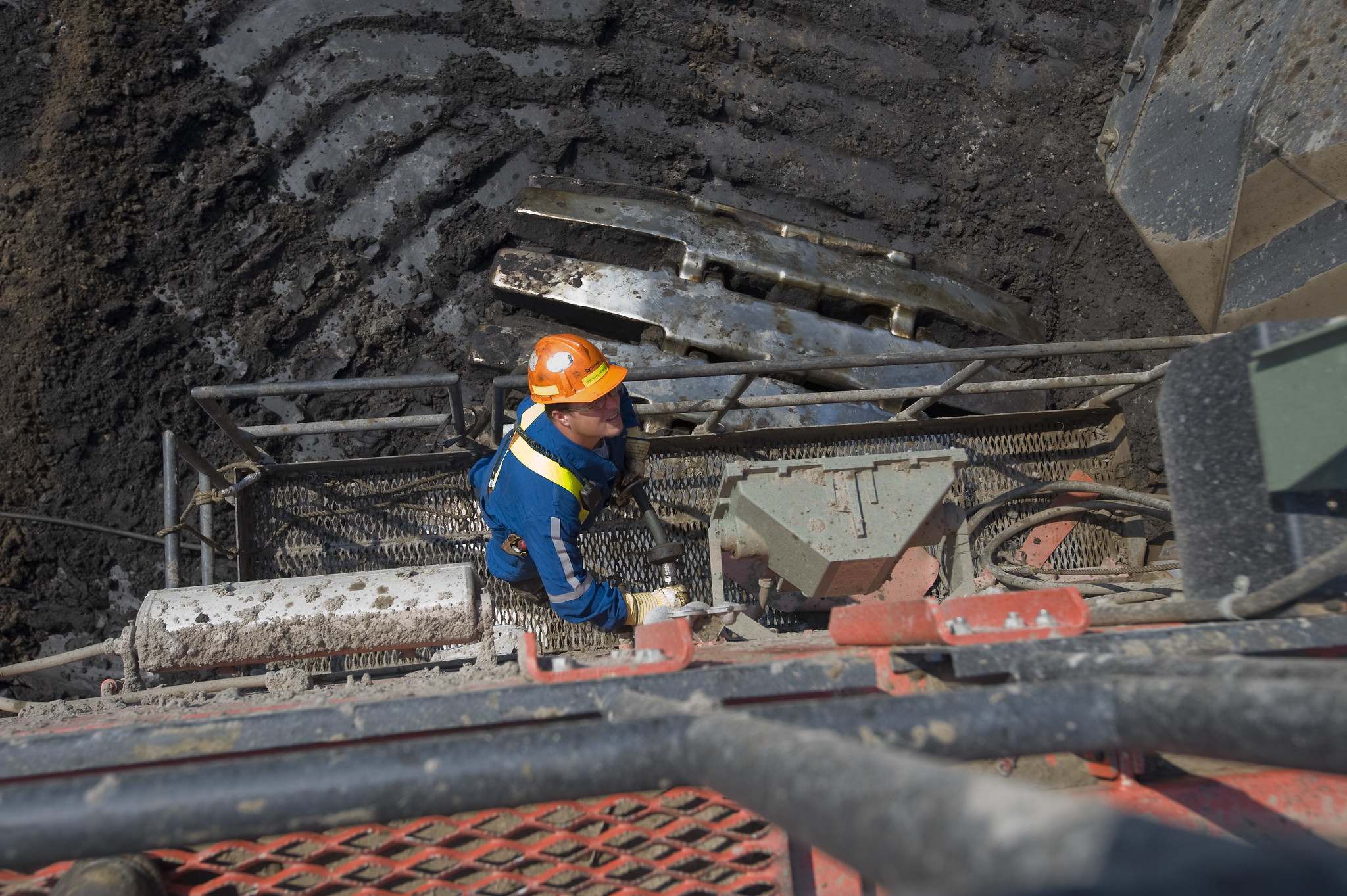 The Syncrude Aurora mine in Fort McMurray, Alta. A new analysis warns that 83 per cent of Canada’s oil from the tar sands must not be extracted if the climate crisis is to be stopped. Photo by Government of Alberta / Flickr
Previous story
Next story

The vast majority of fossil fuel reserves owned today by countries and companies must remain in the ground if the climate crisis is to be ended, an analysis has found.

The research found 90 per cent of coal and 60 per cent of oil and gas reserves could not be extracted if there was to be even a 50 per cent chance of keeping global heating below 1.5 C, the temperature beyond which the worst climate impacts hit.

The scientific study is the first such assessment and lays bare the huge disconnect between the Paris Agreement’s climate goals and the expansion plans of the fossil fuel industry. The researchers described the situation as “absolutely desperate.”

“The (analysis) implies that many operational and planned fossil fuel projects (are) unviable,” the scientists said, meaning trillions of dollars of fossil fuel assets could become worthless. New fossil fuel projects made sense only if their backers did not believe the world would act to tackle the climate emergency, the researchers said.

The conclusions of the report are “bleak” for the fossil fuel industry, implying that oil, gas, and coal production must have already peaked and will decline at three per cent a year from now. States that are heavily reliant on fossil fuel revenue, such as Saudi Arabia and Nigeria, are at especially high risk. A minister from one OPEC state recently warned of “unrest and instability” if their economies did not diversify in time.

To keep below 1.5C, the analysis says:

“It is absolutely desperate,” said Prof. Paul Ekins of University College London, and one of the research team. “We are nowhere near the Paris target in terms of the fossil fuels people are planning to produce.”

A new scientific study lays bare the huge disconnect between the Paris Agreement’s climate goals and the expansion plans of the fossil fuel industry. The researchers described the situation as “absolutely desperate.” #ClimateCrisis #COP26

“Whenever wherever oil and gas are found, every government in the world, despite anything it may have said (about climate), tries to pump it out of the ground and into the atmosphere as quickly as possible. It will require private companies to write down their reserves but, for countries with nationalized oil companies, they just see a whole heap of their wealth evaporating.

“But the positive side is that we actually can do it. We know clean electricity technologies can be deployed at scale very quickly when the policy mechanisms are put in place to do it.”

The researchers said ensuring a fair transition for the many workers in the fossil fuel industry was vital.

Christiana Figueres, the UN climate chief when the Paris climate deal was signed, said: “We must keep fossil fuels in the ground. A safe future has no space for any new fossil fuel extraction. The shift to clean energy must be accelerated in order to maintain human activity now and protect human wellbeing tomorrow.”

Christophe McGlade, a senior analyst at the International Energy Agency (IEA), said: “The research underlines how the rhetoric of tackling climate change has diverged from reality. None of the net-zero pledges made to date by major oil and gas producing countries include explicit targets to curtail production.”

Mike Coffin, an analyst at the financial think tank Carbon Tracker, said: “It is critical that investors in oil and gas companies are aware of the transition risks. There is a very real risk of assets becoming stranded.”

Its latest report finds companies risk wasting more than a trillion dollars on projects incompatible with a low-carbon world, with ConocoPhillips, ExxonMobil, Chevron, and Shell most exposed.

In May, an IEA report concluded that there could be no new oil, gas or coal development if the world was to reach net-zero by 2050. A UN report in December found fossil fuel production must fall rapidly to keep under 1.5 C and avoid “severe climate disruption” but that countries were planning increased outputs.

The new research, published in the journal Nature, used a complex model of global energy use that prioritized use of the fossil fuels that are cheapest to extract, such as Saudi oil, in using up the remaining carbon budget. Costly and highly polluting reserves, such as Canada’s tar sands and Venezuelan oil, are left in the ground in the model.

The analysis took account of how rapidly fossil fuel use could feasibly be ramped down with, for example, coal use in India and China taking time to eliminate. It also considered the cost of renewable energy alternatives in each country. Reserves were defined as the coal, oil, and gas that was economic to extract in 2018, before the coronavirus pandemic.

The proportions of unextractable reserves produced by the analysis are much higher than for a related analysis in 2015. This reflects a reduction of the temperature target from 2 C to 1.5 C and the fast-falling costs of renewables and electric vehicles, with the latter set to significantly cut oil demand.

“The bleak picture painted by our scenarios for the global fossil fuel industry is very likely an underestimate of what is required,” the researchers said. This is because the carbon budget used only gives a 50 per cent chance of 1.5 C and because the scientists assumed a significant level of CO2 removal from the atmosphere using technology that is yet to be proven at scale.

The researchers said there were some “promising signs,” with global coal production having peaked in 2013 and oil output now thought to be at or near peak demand, even by some industry commentators. They said action to cut production could include ending subsidies, taxes and even bans on new exploration. Denmark and Costa Rica recently founded an alliance of countries setting an end date for fossil fuels.

“The net-zero test has to be if you want new (fossil fuel production), you must categorically show what is going to decline elsewhere so we can stay within the carbon budget,” Ekins said. “That, of course, is a test that neither the planned new U.K. oilfields nor the new Cumbrian coal mine meet.”

A spokesperson for the International Association of Oil & Gas Producers said: “Meeting global energy demand while achieving decarbonization is a priority for industry and society. Achieving this without further investments in new oil and gas fields would require massive deployment of other energy sources and efficiencies, as well as huge investments in new technologies, all ramped up at a pace we haven’t seen yet.”

Energy ministers in fossil fuel-rich countries have recently rejected suggestions that exploration and production should decline. Australia’s Keith Pitt said: “Reports of coal’s impending death are greatly exaggerated and its future is assured well beyond 2030.” In June, commenting on the IEA net-zero report, Saudi Arabia’s Prince Abdulaziz bin Salman said: “I believe it is a sequel of (the) La La Land movie.”

The U.K. government, which is hosting the crucial COP26 climate summit in Glasgow at the end of October, was contacted for comment.

“Whenever wherever oil and

“Whenever wherever oil and gas are found, every government in the world, despite anything it may have said (about climate), tries to pump it out of the ground and into the atmosphere as quickly as possible."

True. And any political parties that have the temerity to speak the truth, and campaign against this practice, mostly have zero chance of being elected to form government, or of even having any significant influence on such policies.

This is another manifestation of what is often called "the tragedy of the commons".