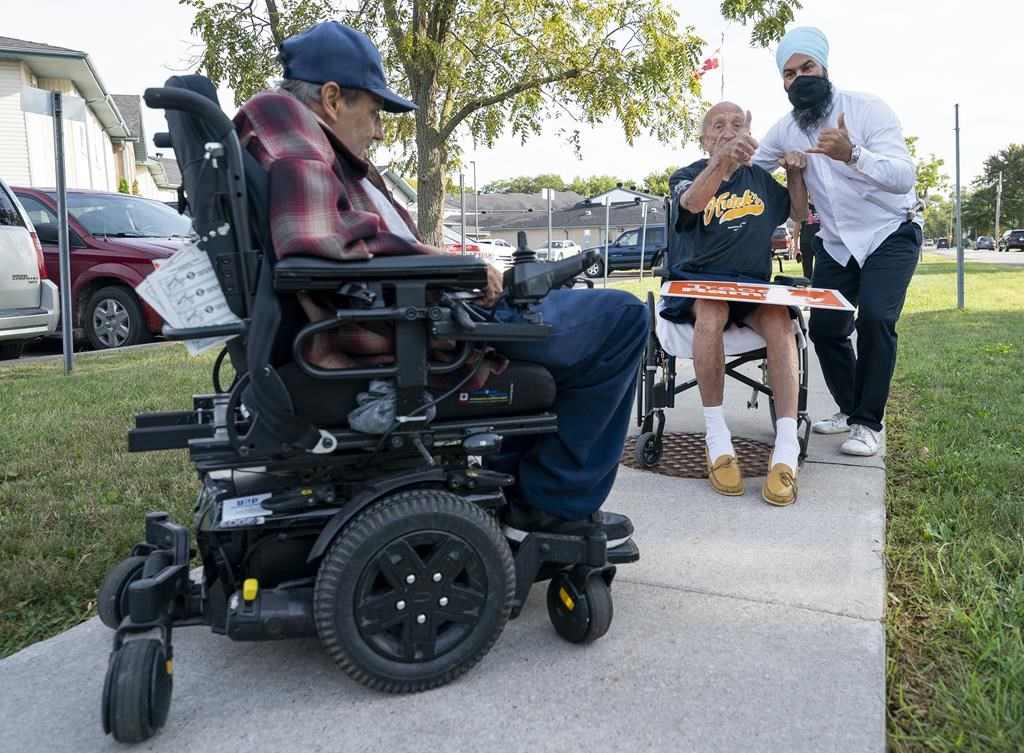 The question of who would make life more affordable for Canadians hit the campaign trail Wednesday with party leaders defending why their spending plans would ease pressures as inflation hit a near two-decade high.

On Wednesday morning, Statistics Canada reported prices increased by 4.1 per cent in August compared with the same month one year earlier, fuelled by rising consumer demand and supply-chain constraints for many goods.

NDP Leader Jagmeet Singh and Conservative Leader Erin O'Toole were quick to pin blame for rising prices on what they called Liberal Leader Justin Trudeau's inaction on multiple fronts, including in the country's hot housing sector.

The spending plans from each party could put more pressure on prices and interest rates, and they could hurt, rather than help, voters' pocketbooks, according to a Scotiabank analysis of platform commitments.

The federal government has pumped billions of dollars in aid to hard-hit families, putting a financial floor under them while also spurring demand for goods and services. But the supply of those goods and services has yet to catch up.

None of the parties are promising to turn off the taps in the near term even as the economy recovers.

"Platforms are going to boost spending a bit more over the next year or so, precisely at a time where we're already seeing inflation running hot," she said in an interview. "We're all calling for (inflation) to be transitory and come back down over the next two years. Certainly, the platforms don't make that easy."

During a morning stop in Essex, Ont., Singh said that bringing down housing prices is one way to address affordability concerns, arguing wages haven't kept pace with the cost of ownership.

But he stood firm on his party's spending plans that call for $214 billion in new social programs like pharmacare and dental care to help people hurt by the pandemic-induced downturn.

"A working-class person, middle-class person, when you go through an economic crisis, and there aren't supports in place, things get even worse," Singh said.

"If we don't invest in people, if we don't spend on our health care, don't make life more affordable, then they're the ones that are going to end up paying the price."

The national average home price is expected to reach $680,000 this year, up 20 per cent per cent from last year, according to the Canadian Real Estate Association.

Speaking in Halifax, Trudeau said his platform zeros in on affordability with hefty housing and child-care measures.

He argued that O'Toole's housing plan, which incentivizes investors to inject money into rental housing by tweaking rules around capital gains taxes, wouldn't ease costs. And the Conservative child-care plan, Trudeau said, "is a tax break that doesn't create any spaces" or address affordability concerns.

O'Toole pointed to his party's pledges to create more competition in the telecommunications market and tackle price fixing at grocery chains as measures to cool price pressures.

The Conservative platform logs new spending at $52.5 billion over the next five years versus $78 billion under the Liberal platform over the same period. O'Toole argued his spending wouldn't add to price pressures by pointing to his promise to balance the books in the next decade.

"We have a plan to get Mr. Trudeau's spending under control. He never wants to get it under control," O'Toole said.

The arguments formed the backdrop to parties' push to secure the last bit of support needed before Monday's vote, hoping to encourage their backers to the polls and lure voters who are undecided or could switch support.

A recent poll conducted by Leger in collaboration with The Canadian Press indicated the Liberals and Tories were tied with the support of 32 per cent of decided voters ahead of the Sept. 20 election, with the NDP at 20 per cent.

Trudeau argued anew to progressive voters that they could only entrust his party to stop the election of a Conservative government. Singh countered that Trudeau styles himself a progressive but has failed follow through, using the example of an unfulfilled pledge to eliminate fossil fuel subsidies.

O'Toole said his party had let voters down in the past, but he asked centrists to reconsider voting Conservative by arguing his party was more progressive than before.

Election 2021: What does the campaign mean for your dinner?