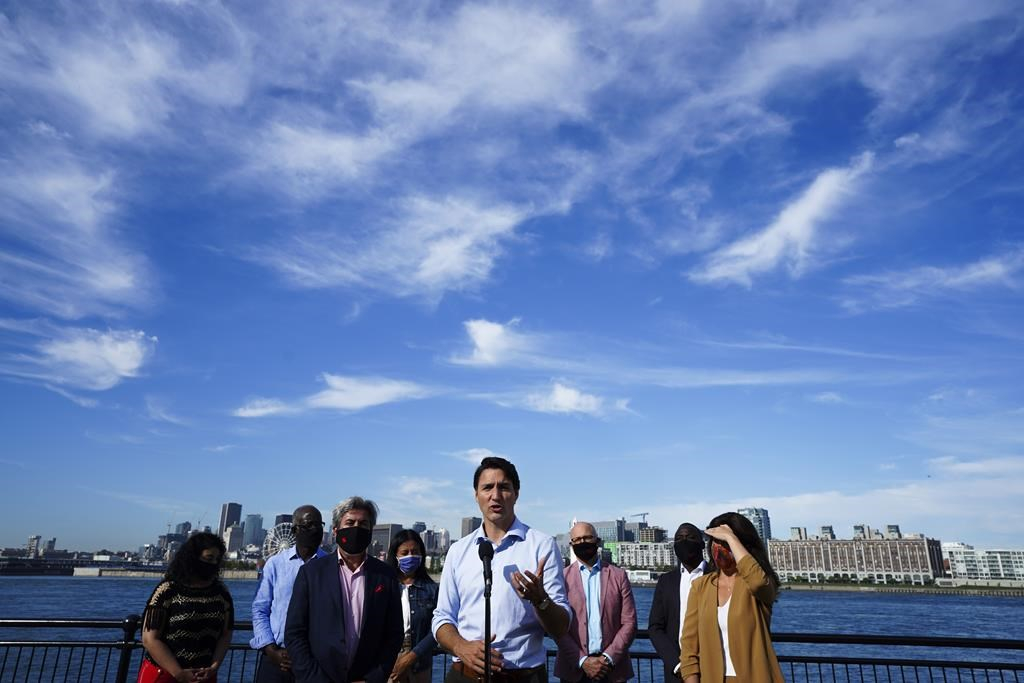 Federal leaders pointed fingers and fired rounds at each other Thursday over the spiralling COVID-19 crisis in Alberta, each seeking to forge a link in voters' minds between the province's dire health emergency and the others' policies.

A day earlier, Alberta Premier Jason Kenney reintroduced limits on gatherings along with elements of a vaccine passport system — after months of resistance — as he declared a public health emergency that is threatening to overload intensive care units.

Liberal Leader Justin Trudeau said conservative politicians across the country have been less effective in fighting the pandemic, and questioned whether Tory Leader Erin O'Toole should be sitting across from them at the premiers' table.

"Just a few days ago Mr. O’Toole was still applauding Mr. Kenney for his management of the pandemic," Trudeau said in Montreal, claiming that "anti-vaxxers within his own party run the show."

O'Toole had praised Alberta’s testing and contact tracing regimes Sunday as efforts for the federal government to emulate.

"He won’t demand that all his candidates get vaccinated. He doesn’t criticize his candidate who wasn’t fully vaccinated who goes into seniors’ homes," Trudeau said, referring to Michelle Ferreri, the Tory candidate for Peterborough-Kawartha who posted photos of herself to social media canvassing in a retirement residence despite having received only one shot.

Trudeau said ventilators are en route to Alberta and that he has asked Canada's top civil servant to "offer any support we can," including seconding medical professionals to infection hot spots.

Minutes later at an event in Saint John, N.B., O'Toole pinned the deteriorating situation in the province largely on Trudeau while avoiding any mention of Kenney's name, despite being asked about him repeatedly by reporters. He said the Liberal leader let the Delta variant gain a "bigger hold" than necessary and proceeded to trigger an election amid a surging fourth wave.

"Rather than double up our resources to fight this Delta spread, he called an election. The $600 million this election costs could be helping all provinces in their fight," the former military helicopter pilot said, pledging to be their "wingman."

"I would never call an election in the middle of a health crisis."

In Toronto, New Democrat Leader Jagmeet Singh said the fault lies with Kenney but insisted Trudeau must share responsibility, since he set off an election campaign that has soaked up attention and resources and sent candidates to doorsteps across the country ahead of voting day on Monday.

"There's no question that Mr. Kenney is to blame here and that his leadership has been horrible. But it doesn't also dismiss the fact that Mr. Trudeau called an election while the fourth wave was hitting hard — while everyone knew that it was going to hit," Singh said.

He also criticized the Liberal leader for not expanding paid sick leave, though the party has now promised to do so in its platform.

The NDP plans to change its tactics on the ground to adapt to Alberta's unfolding crisis, Singh added, but offered no specifics, saying an "assessment" is underway.

With its health system under threat of collapse, the province is asking for help from its neighbours to use their intensive care beds and staff while prepping its triage protocols, which would see doctors forced to choose who gets life-saving treatment and who does not.

"We may run out of staff and intensive care beds within the next 10 days," Kenney said Wednesday.

"Unless we slow transmission, particularly amongst unvaccinated Albertans, we simply will not be able to provide adequate care to everyone who gets sick."

Alberta has 269 patients in intensive care in a system set up for 173. Of the patients in ICUs, 218 have COVID-19 — the vast majority unvaccinated or partially vaccinated.

Kenney apologized for misreading COVID's predicted path in June and said "it is now clear that we were wrong," but added he wasn't sorry for lifting all restrictions.

In neighbouring Saskatchewan, Premier Scott Moe announced Thursday the province will bring in a mask mandate Friday and a proof-of-vaccination scheme on Oct. 1 in a bid to boost immunizations.

"Unless we can quickly reduce overall transmission rates through accelerated vaccination and other measures where the virus is surging, continued expansion of the epidemic could lead to higher case counts than we have experienced thus far," Tam said at a news conference Thursday.

Nearly seven million eligible Canadians have yet to get two jabs, she said, stressing vaccines' importance in the face of the Delta variant. The mutated virus is "highly contagious and more severe," threatening to push hospitalizations beyond health systems' capacity in some areas, Tam said.

Reserving his harshest salvos for O'Toole, Trudeau held much of his fire against Kenney and said the prime minister's pandemic role with the provinces is to "encourage" and "support" with billions of dollars and millions of rapid tests.

“It’s not my job to judge or to criticize or certainly not to tell people what to do in the provinces. They are duly elected," he said.

Singh reacted hours later: "You know what, if he doesn’t think it’s his job, maybe someone should replace him."

Former U.S. president Barack Obama felt differently, offering up an endorsement on Twitter that Liberal organizers seized on with text blasts within hours.

Wishing my friend @JustinTrudeau the best in Canada’s upcoming election. Justin has been an effective leader and strong voice for democratic values, and I’m proud of the work we did together.

"Wishing my friend @JustinTrudeau the best in Canada’s upcoming election. Justin has been an effective leader and strong voice for democratic values, and I’m proud of the work we did together," Obama wrote in a midday tweet Thursday.

This report by The Canadian Press was first published Sept. 16, 2021.

— With files from Allison Jones in Toronto, Kelly Geraldine Malone in Oshawa and Laura Osman in Ottawa