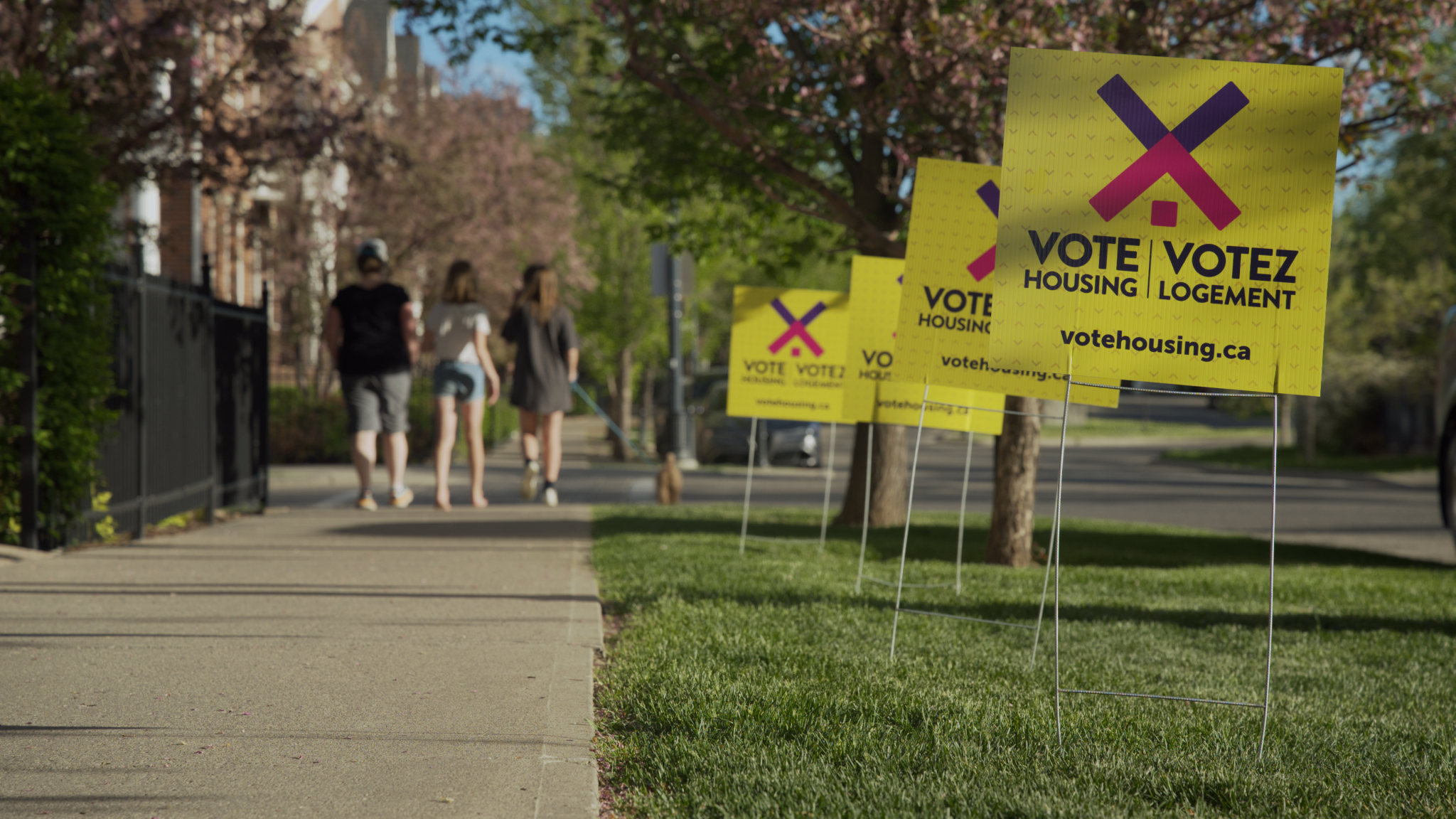 Mayors across Canada are calling on the federal parties to take urgent action on housing and homelessness as voting day fast approaches.

In an open letter to the federal parties, 17 mayors from cities across the country — including Toronto, Calgary, Vancouver, Halifax, Ottawa, Montreal, Winnipeg, and Edmonton — push the next federal government to use its leadership to deal with the “devastating consequences” of Canada’s underfunded affordable housing and social services.

“I'm hoping this letter is a clear signal to federal party leaders and Canadians that there is a housing and homelessness crisis,” said Tim Richter, president of the Canadian Alliance to End Homelessness (CAEH), a national advocacy group that aims to end homelessness across the country.

“There is support for action on ending homelessness and addressing Canada's housing need beyond just the homeownership piece of the housing crisis in Canada.”

The letter endorses a six-point platform by Vote Housing, a national non-partisan campaign to end homelessness and improve housing in Canada, as well as a housing platform by the Federation of Canadian Municipalities.

Both platforms call for urgent federal action, significant new investments in housing construction, and supports like rental assistance to reduce core housing need, which is when a home is in need of significant repairs, is too small for the household that lives there, or costs more than 30 per cent of the household’s income.

Richter said this is the first federal election in his memory where housing has been a top priority, and it reflects the views of Canadians.

Eighty per cent of Canadians said they would be more supportive or somewhat supportive of a political party that proposes concrete action to end homelessness and build safe, affordable housing in Canada, according to a Nanos poll for the CAEH done in August.

The letter explains that Canada’s rise in homelessness and unaffordable housing is a direct result of the federal government pulling investments in affordable housing and social services in the 1980s and 1990s.

“This situation was created by federal policy, and it will take federal leadership to reverse its devastating consequences,” it reads.

17 mayors from cities across the country are calling on federal parties to act urgently to address #HousingCrisis and #homelessness in line with recommendations from @votehousingca and the Federation of Canadian Municipalities. #elxn44 #cdnpoli

Greens the only party to promise supportive housing

Although each party addresses housing in its platform, some commitments are stronger than others.

Supportive housing involves providing renters with a subsidy to make housing more affordable and pairing them with social workers and other services to help tenants with finances, assistance applications, getting to appointments, and other support.

It is considered one of the most effective ways to address long-term homelessness, said Nick Falvo, a Calgary-based consultant and research associate with Carleton University specializing in homelessness and affordability.

“When four of the five parties don't even mention supportive housing, that's quite disappointing,” he said.

He said the Liberals, Conservatives, and NDP all put significant emphasis on first-time homebuyers in their platforms and little focus on homelessness, whereas the Bloc Québécois and Greens put more emphasis on addressing homelessness.

A Green government would “declare housing affordability and homelessness a national emergency,” a Green party spokesperson said, as well as require housing developments that receive federal funding to ensure 30 per cent of all units in each development are deeply affordable and/or available to people with disabilities and special needs.

Along with its supportive housing pledge, the Green Party also shares the Vote Housing call to action to build and acquire a minimum of 300,000 units of deeply affordable non-market, co-op, and non-profit housing over a decade.

The Greens also pledge to “refocus” the Canadian Mortgage and Housing Corporation “on supporting the development of affordable non-market and co-operative housing, as opposed to its current priority of supporting Canadian lenders to de-risk investment in housing ownership,” which Falvo said is “bold.”

Steve Pomeroy, a housing policy research consultant in Ottawa, says the Liberal and NDP platforms heavily emphasize homeownership, despite the fact only about four per cent of Canada’s total households buy a home each year, meanwhile, renters make up 32 per cent of the population.

“(Renters are) facing massive challenges in terms of rising rents, and ‘renovictions’ and a whole bunch of issues like that, and there's very little in (the platforms) that's really addressing serious affordability challenges for renters,” said Pomeroy.

The NDP platform is also ambitious but less specific than the Greens’, pledging to “create at least 500,000 units of quality affordable housing in the next 10 years, with half of that done within five years.”

The NDP’s platform does mention “fully implementing the right to housing” and says the party would work “toward the goal of ending homelessness in Canada within a decade,” which is in line with the asks from the letter, but thin on implementation details. The platform does mention adopting a “housing first” approach, a strategy that focuses on permanently housing people experiencing homelessness as quickly as possible.

During the election campaign, federal NDP Leader Jagmeet Singh pledged $5,000 in annual rent subsidies, though this is not reflected in the official platform.

The Liberal housing plan would support the construction of 100,000 middle-class homes, build over 20,000 more units of new affordable rental housing, and revitalize 130,000 units that are in a state of disrepair.

“Affordable” means a lot of different things to different people, said Pomeroy, meaning the devil will be in the details. Admittedly, though, it is hard to delve into all the specifics in an election campaign dominated by 10-second soundbites, he said.

In 2017, the Liberals aimed to decrease homelessness by 50 per cent, but last fall, the party upped the ante, saying its new focus would be eliminating homelessness in Canada.

Its platform also mentions making $4 billion available to cities through a Housing Accelerator Fund to further its goal to create the 100,000 middle-class homes, but it’s unknown whether the $4 billion would be administered as grants or loans.

The Liberals also say they would double the existing Budget 2021 commitment to $600 million to support the conversion of empty office space into housing.

“Every Canadian deserves a place to call home,” Liberal Party spokesperson Brook Simpson said in a statement, adding that, the party would build “on the success of the National Housing Strategy in addressing housing for the most vulnerable Canadians” to “accelerate new construction” and “make it more affordable and viable for first-time home buyers.”

Overall, Falvo said the Liberals and NDP share a similar strategy, “bending over backwards trying to impress the first-time homebuyers.”

Conservatives’ housing plan ‘out of touch’

To Falvo, the Conservatives seem least interested in helping renters. The party’s commitment to invest “$325 million over the next three years to create 1,000 residential drug treatment beds and build 50 recovery community centres across the country” is positive in that treatment programs are generally underfunded, but should not be considered a main response to homelessness, he said.

“It suggests that the Conservatives under Mr. O'Toole are quite out of touch with mainstream homelessness thinking these days,” said Falvo.

The Conservatives pledge to build a million homes in the next three years, a plan which includes a proposition to incentivize corporations and private landowners to donate property to Land Trusts for the development of affordable housing, but makes no mention of specific numbers of affordable units.

Between rising home and rent prices and an increase in homeless encampments resulting from COVID, this issue is top of mind for Canadians, said Pomeroy.

The mayors’ letter is less about determining which party currently has the right housing formula and is more about encouraging them all to adopt the calls to action, to at least some degree, so the federal government can be held to account after the election, he added.

“I think the concern that the mayors are raising is that the platforms don't really articulate much in the way of what you're really going to do for the most vulnerable,” said Pomeroy.

Election 2021: Who will fight for tax fairness?

The Conservatives promise of

The Conservatives promise of a million homes is total hot air.
There is little the feds ( any party) can do about housing. And certainly not the labour available to do the work . Decrease demand by reducing immigrants is one way and reduced immigration could help raise wages and reduce inequality. But then our total population may stop growing and that is serious for the future of our democracy