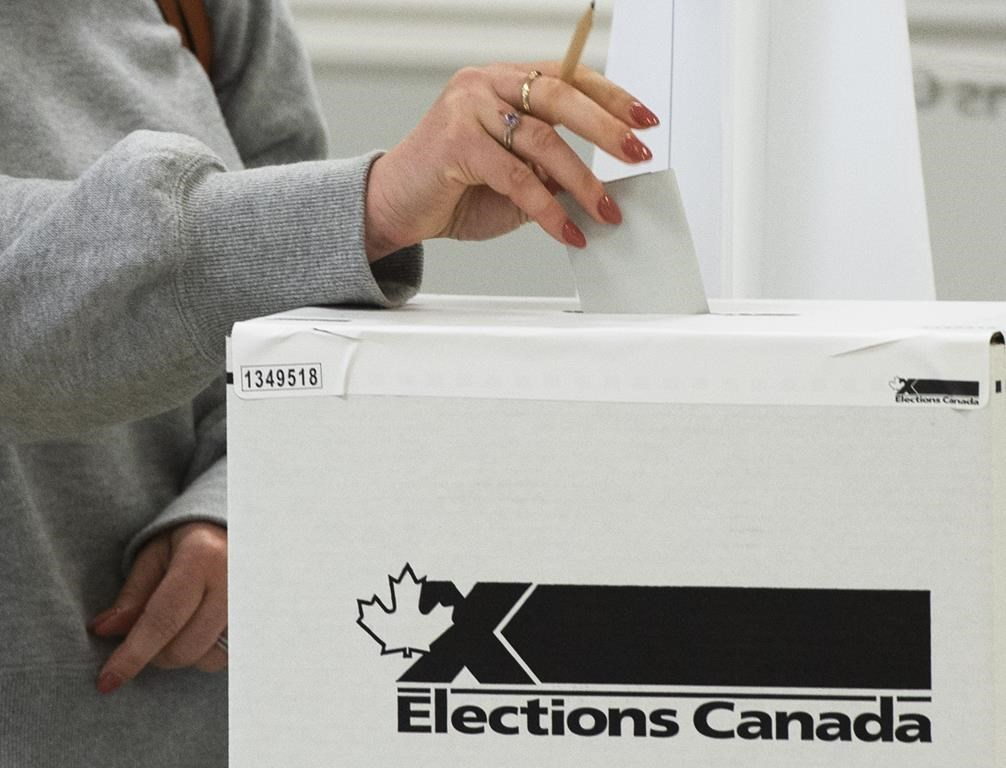 A voter casts their ballot in the advance polls, in Chambly, Que., on Friday, Sept. 10, 2021. File photo by The Canadian Press/Ryan Remiorz
Previous story
Next story

Canadians have chosen another minority Liberal government — almost identical to the one it replaced — to finish the fight against COVID-19 and rebuild the shattered economy.

Precisely how stable a minority remains to be seen, as results were still trickling in and there were tight contests in dozens of ridings as the clock ran out on Monday night.

There are also almost 800,000 mail-in ballots to be counted, starting Tuesday, which could yet change the preliminary results in many of those tightly contested seats.

Late Monday, Justin Trudeau's Liberals were leading or elected in 156 seats — one less than they won in 2019 and 14 short of the 170 needed for a majority in the House of Commons.

Erin O'Toole's Conservatives were leading or elected in 122 seats, just one more than 2019 even though they won slightly more of the popular vote than the Liberals, as they did last time.

Jagmeet Singh's NDP were leading or elected in 27, a gain of three seats, while Yves-François Blanchet's Bloc Québécois was down one to 31.

The Greens, which elected three MPs in 2019, were down to two. Leader Annamie Paul, who had faced an internal insurrection last spring, was projected to come in a distant fourth place in Toronto Centre in her third try to wrest that seat from the Liberals.

Maxime Bernier's People's Party, which ran on an anti-public health restrictions platform, didn't come close to winning a seat anywhere but pulled enough votes from the Conservatives to rob them of victory in a number of close races, particularly in Ontario.

The upshot raises questions about the judgment and strategy of both Trudeau and O'Toole.

Trudeau pulled the plug on his minority Liberal government on Aug. 15, a little less than two years after Canadians first reduced the Liberals to a minority.

He argued that Canada was at a pivotal moment in history and Canadians deserved a chance to decide how they wanted to proceed through the rest of the pandemic and beyond.

But the timing of his election call, coming as a fourth wave of the novel coronavirus was beginning to sweep the country, quickly sapped the goodwill Trudeau had built among Canadians for his government's handling of the pandemic over the previous 18 months.

And it gave rival leaders an opening to attack Trudeau's character, describing him as a selfish egoist who can't be trusted to put the interests of Canadians ahead of his personal ambition to secure a majority.

The 36-day campaign also exacerbated divisions in the country over the approach to mandatory vaccinations and vaccine passports, sparking ugly protests by profanity spewing opponents of public health restrictions, including one incident in which gravel was thrown at Trudeau and his entourage.

While the result was virtually identical to 2019, the geographic landscape was slightly changed. After being shut out of Alberta and Saskatchewan last time, the Liberals were poised to pick up two seats in Alberta.

In his victory speech, Trudeau, who never explicitly called for a majority, suggested that the result was nevertheless a clear mandate for his government.

"Some have talked about division but that's not what I see," Trudeau said, arguing that millions of Canadians voted for a progressive Parliament.

"I see Canadians standing together, together in your determination to end this pandemic, together for real climate action, for $10-a-day child care, for homes that are in reach for middle-class families, for our shared journey on the path to reconciliation."

Still, Trudeau acknowledged the anger over the timing of the election.

O'Toole won his party's leadership last year by courting social conservatives but then ditched his "true blue" image in a bid to broaden his party's appeal outside its Western Canada base. He presented himself to voters as a moderate with pricey centrist policies, including a plan to put a price on carbon, which his party had previously pilloried as a job-killing tax on everything.

But the move did not produce the hoped-for breakthrough for the Conservatives in Ontario or Quebec, where the Liberals once again won the lion's share of the seats, and helped push some right-wing voters into the arms of the People's Party.

In a speech to supporters after the outcome O'Toole doubled down on his centrist approach and, in an apparent bid to head off any move to oust him as leader, signalled that he's not going anywhere.

Predicting that Trudeau will plunge the country into another election in 18 months in yet another bid to secure a majority, O'Toole said he's "resolutely committed to continuing this journey for Canada."

He said he'd congratulated Trudeau on the election victory but also told him, "If he thinks he can threaten Canadians with another election in 18 months, the Conservative party will be ready and, whenever that day comes, I will be ready to lead Canada's Conservatives to victory."

The NDP, which had hoped to ride on Singh's status as the most popular federal leader, did not make the number of gains it had hoped for either. It lost its lone Atlantic seat and was down one to just five in Ontario. It did pick up one seat in Quebec, where it now holds just two of 78 seats, and gained one in Alberta.

As before, Trudeau will need the support of at least one opposition party to pass any legislation and survive crucial confidence votes.

Both Singh and Blanchet indicated that they will push their priorities in exchange for supporting the Liberal government. For Singh, that includes making the "super wealthy" pay their fair share of taxes.

Blanchet said the Bloc Québécois will support the minority government on issues and legislation that it deems to be in Quebec's best interests but oppose it if Quebec's interests are not served.

For her part, Paul admitted she was disappointed to lose her bid for a seat but celebrated the re-election of former Green leader Elizabeth May and a gain by Green candidate Mike Morrice in Kitchener Centre, where the Liberal incumbent, Raj Saini, was dumped by his party mid-campaign over sexual harassment allegations that he denies.

She did not mention whether she'll try to carry on as leader.

This report by The Canadian Press was first published Sept. 20, 2021.