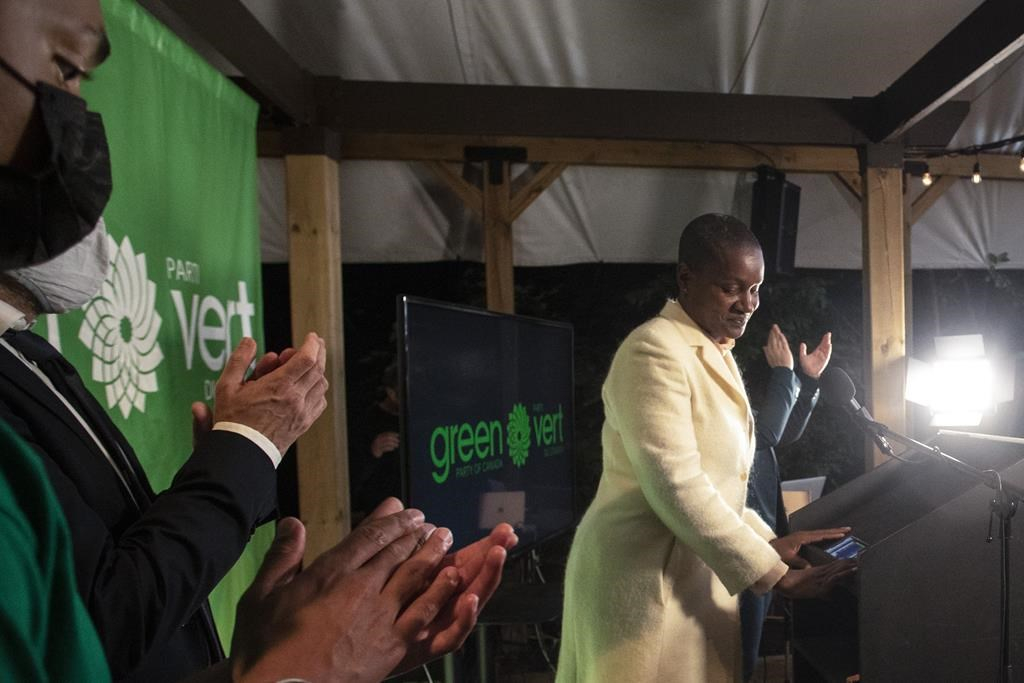 Green Party Leader Annamie Paul stands at the podium as she concedes defeat in her riding of Toronto Centre on election night in Toronto, on Monday, September 20, 2021. File photo by The Canadian Press/Chris Young
Previous story
Next story

The Green Party faces a self-reckoning after a federal election that dashed hopes of growth following a year marred by internal strife, say Green officials past and present.

Leader Annamie Paul finished fourth in her riding of Toronto Centre, and as of Wednesday the party had two candidates elected — one fewer than in 2019.

It also endured a drop in its share of the popular vote to 2.3 per cent from 6.55 per cent last time around.

Paul supporters say a dearth of resources and staff layoffs hampered any attempt at a co-ordinated countrywide campaign, which lacked a national director during all five weeks. Meanwhile the leader barely left her riding as she tried to compensate for funding that was earmarked for her local campaign but nixed by party executives.

A bitter power struggle between Paul and members of the federal council — the Greens' main governing body — dragged on for months ahead of the election, culminating in attempts to oust Paul that served up snapshots of a party in disarray.

The turmoil resulted in only 252 candidates being nominated, rather than a full slate of 338, the first time the party's fallen significantly short of that benchmark in more than two decades.

However, a glimmer of hope emerged Monday when Green candidate Mike Morrice cruised to victory in Kitchener Centre, a new beachhead for the 38-year-old party.

More than 7,000 mail-in ballots are also still being counted in Nanaimo—Ladysmith, where Green incumbent Paul Manly trails a New Democrat and a Conservative in a tight three-way race.

The party now confronts alternate visions of how to move forward, with ex-interim executive director Anik Lajoie saying it needs to rebrand and shore up power in the leader's office, while others stress reconnection with the grassroots in a more bottom-up revival effort.

"They need to have a leader and not a spokesperson," Lajoie said, referring to how the leaders' role is viewed by many Greens.

#GreenParty in tatters, with glimmers of hope, after disappointing election finish. #CdnPoli #Elxn44

"Right now all the power is in the federal council. I understand that this party is based on members and membership, but at one point when you have a leader, you need to let them lead."

Lajoie is also calling for a more extensive ground game and professional approach to communications.

"Where's the Facebook Live? Where's the camera? Where's that? 'I don't know. We don't have that. Oh, we need that?'" she recalled. "It was ridiculous … It's like they don't want to play the game."

Other Green stalwarts say the problem lies in harnessing the energy of the base, not in the party's decentralized structure or unvarnished branding.

"This Green Party can rebuild and become relevant again by becoming a movement from coast to coast to coast. This will require reconnecting with our grassroots and unleashing it effectively," former federal councillor Samuel Moisan-Domm said in a text, adding that the leader should be sensitive to both the libertarian and eco-socialist streaks in the party culture.

He and Lajoie agree, however, that the party narrative and platform need to evolve, and that greater unity is essential. "The party needs a spokesperson (or two) that can unify different factions," he said.

For now, many Greens remain dispirited after a shattering defeat.

"It's an absolute shame," said Phil Desrosiers, who served as deputy campaign manager. "It breaks my heart."

Nonetheless, he sees reason for hope.

"There is definitely a path to rebuilding because of Mike Morrice," he said, adding that the federal party's first Ontario beachhead bodes well for provincial Greens as well, who have a seat nearby in Guelph under leader Mike Schreiner.

"I think that that's where a lot of people will put their efforts … It's a real opportunity. And if this is done correctly I think that it can lead to a lot more seats in Ontario."

The Greens lost their foothold in Atlantic Canada after Jenica Atwin, who snagged Fredericton in 2019, defected to the Liberals in June and clung on to the riding in a nail-biter this week.

On top of morale, money remains an issue. The Green party shelled out hundreds of thousands of dollars on legal battles with Paul over the summer, worsening an already rough financial situation.

Douglas Tingey, then president of the Green Party of Canada Fund, stated in a July report that the "current financial situation is not sustainable."

The party did secure a $1.3-million loan for its national campaign, according to three sources who were not authorized to speak publicly on the matter.

Paul survives as leader of Greens, speaks about 'incredibly painful' past few weeks