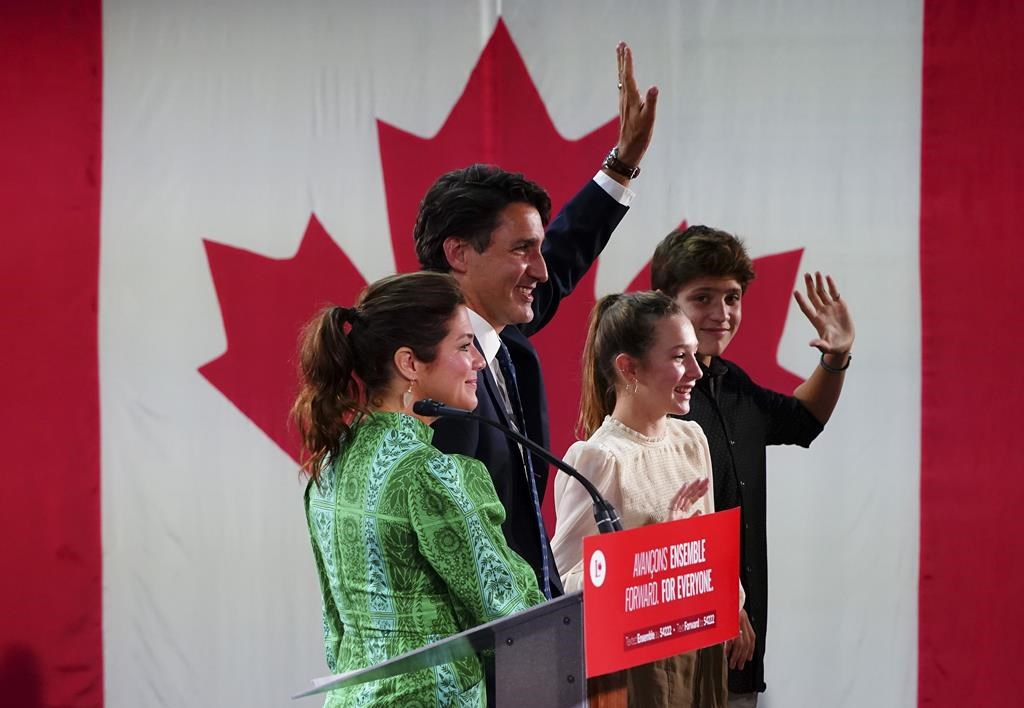 Prime Minister Justin Trudeau is joined on stage by wife Sophie Gregoire Trudeau, and children Xavier and Ella-Grace, during his victory speech at Party campaign headquarters in Montreal, early on Sept.21, 2021. Photo by The Canadian Press/Sean Kilpatrick
Previous story
Next story

Prime Minister Justin Trudeau will be returning to Ottawa without the majority government mandate Liberals had hoped for when he called the early election last month.

Early Tuesday, the Liberals were hovering between 155 and 157 seats. The former is the number they had when Trudeau called the election in August, and the latter is what they won in 2019.

The Conservatives were teetering on 121 or 122 seats, after winning 121 less than two years ago.

They will remain the official Opposition, with leader Erin O'Toole promising the "changed" party he leads will speak for all Canadians from all walks of life.

The Bloc Québécois and NDP will bring up the rear, each individually potentially holding the balance of power in the minority House of Commons, both also within a few seats of their 2019 tallies.

With more people voting by mail than ever before, the final result in some ridings might not be known for days.

Elections Canada will start counting more than 780,000 mailed-in ballots Tuesday, and it expects most to be finished by Wednesday, but officials did warn some ridings could take up to four days for final counts.

Some extremely close races in Vancouver Granville, Edmonton Centre, and Davenport in Toronto were still going back and forth between parties as votes were counted well into the night.

Trudeau attempted a conciliatory tone in his acceptance speech, promising Canadians that he knows all they want is to finally get back to normal after the pandemic. He says the government they elected will do just that.

O'Toole said that in his concession phone call, he warned Trudeau off calling another early election to make a grab for a majority government.

“I told him if he thinks he can threaten Canadians with another election in 18 months the Conservative party will be ready," O'Toole said at his election night event in Oshawa, Ont.

NDP Leader Jagmeet Singh, who two years ago was chided for dancing and celebrating at an election night party despite losing 20 seats, delivered a very short, more subdued speech from Vancouver, even though this time his party did make some gains.

Most election parties were smaller and quieter than usual, with pandemic restrictions keeping crowd sizes to a minimum.

The People's Party of Canada more than doubled its share of the popular vote and might have played spoiler to the Conservatives in some ridings by drawing away right-of-centre voters, but failed to elect a single MP.

The Green Party's pre-election turmoil left it with less than half the vote share it achieved in 2019, following a campaign where Leader Annamie Paul finished fourth in her own riding, and was asked not to visit many others by her own candidates.

No leaders stepped down Monday, but the future is murky for many, including Trudeau, who failed to secure a majority mandate after triggering the early election.

O'Toole was clearly sending the message in his speech he has no intention of stepping down.