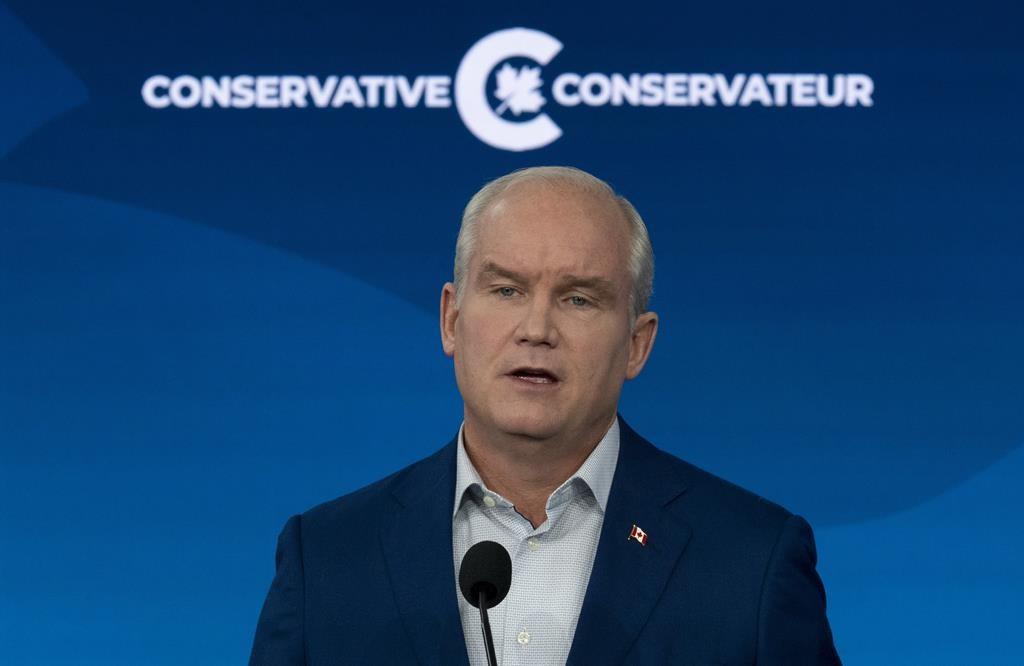 Conservative leader Erin O'Toole is seen during a news conference on Tuesday, September 21, 2021 in Ottawa. File photo by The Canadian Press/Adrian Wyld
Previous story
Next story

Some re-elected Conservative members of Parliament — along with a former leadership contender — are lining up to say others should get united behind leader Erin O'Toole, as questions swirl about whether his election performance warrants him staying in the job.

An effort has already been started by a member of the party's national council petitioning for members to get a chance to review O'Toole's leadership earlier than scheduled in 2023, saying he's broken their trust.

As of Thursday, it had garnered around 2,300 signatures but has been dismissed by the party's president as an invalid way to trigger a referendum because a review is set to happen later, and the petition could have been signed by those outside the party.

While some believe it's time for O'Toole to go, Alberta representative Garnett Genuis took to social media to call on Conservatives to avoid "another round of internal conflict or public navel-gazing" after the unsuccessful campaign.

"We must learn the lessons of the election, share constructive feedback, and remain united behind Erin O'Toole," he tweeted Thursday.

Conservatives should stay united, defend our principles, and remain focused on giving Canadians better government. We must learn the lessons of the election, share constructive feedback, and remain united behind @erinotoole. #cdnpoli #Elxn44 (6/8)

Michelle Rempel Garner, a high-profile MP who most recently served as the party's health critic, said she expects the campaign to be reviewed, and "expect our member's and caucus concerns to be thoroughly addressed."

"Given that we are in a significant crisis period in Canada, I take Erin O'Toole at his word that he will do this and I will contribute to that process."

She was welcomed to run after her performance during the party's 2020 leadership race. As a relative unknown, she won the backing of many social conservatives from the party's grassroots, who O'Toole drew on to support his win under the ranked ballot system.

Conservative MPs urge party to unify around O'Toole as others question his leadership. #CPC #CdnPoli #Elxn44

"I believe that the rush to apply judgment on our former leader Andrew Scheer, before we had a chance to complete our review of the 2019 campaign, and while emotions were still high, was unwise," Lewiswrote in a Facebook post Thursday evening.

"I believe that doing the same to Erin now would be equally unwise."

The Conservatives are projected to finish with 119 seats, two fewer than the party won during the 2019 federal election under Scheer.

The former leader made bigger gains than O'Toole did, but resigned after pressure mounted for him to leave as he continued to be dogged with questions about his socially conservative views around abortion and LGBTQ issues.

O'Toole has said he's trying to grow the party and has taken a more progressive stance on such matters. He also introduced a Conservative carbon price on fuel after winning the party's leadership on a promise to be a "true blue" candidate and axe policies like the Liberals’ carbon price.

He's committed to staying on as leader and admits the party didn't make the gains it needed to in Metro Vancouver, the Greater Toronto Area and Quebec to defeat the incumbent Liberals.

"I expect a full review of our campaign, and I expect our member's and caucus concerns to be thoroughly addressed. Given that we are in a significant crisis period in Canada, I take Erin O'Toole at his word that he will do this and I will contribute to that process."

"Anybody who's calling for a leadership review in the Conservative Party today needs to shake their head and give themselves a pinch," he said.

"How can you as a party continue to, election after election, change leaders and expect the public to have any confidence in you when it comes to the next election? So I am 100 per cent supportive of Erin."

Liepert said in his mind the election came down to vaccines, as a large percentage of the people in his riding supported getting immunized as well as a vaccine passport system.

"Any votes we lost, in my view, were tied into maybe not being firm enough on having people vaccinated and vaccine passports."

Conservative MPs who have also publicly expressed their support of O'Toole's leadership include Michael Chong, the party's foreign affairs critic, and Candice Bergen, who served as the party's deputy leader before the election.

Others have been more critical.

Town & Country News reported re-elected Alberta MP Chris Warkentin as saying he felt the party's electoral fortunes shifted toward the Liberals in the campaign when O'Toole began to "waffle" on some policies.

Warkentin didn't immediately return a request for comment left at his office.

One of the hits O'Toole took during the campaign was when he said he would keep a Liberal ban on some 1,500 models of firearms, including the AR-15, in place despite his platform promising to do the opposite to address the concerns of firearms owners, hunters and sport shooters.

That resulted in him inserting a footnote into the document, saying the ban would remain in place pending the outcome of a classification review.

British Columbia MP Mark Strahl has said the party needs to probe the specific reasons why it lost and posted a quote from an article Thursday on Twitter, adding “good read.”

No timeline has been provided as to when Conservatives will hold their first caucus meeting postelection.

O'Toole sidestepped a question this week about whether he would test if caucus wanted him to remain as leader, but said he's initiated a postelection review to examine what went right and what went wrong in the campaign.

No details have been provided as to who will conduct the review or what the parameters will be.