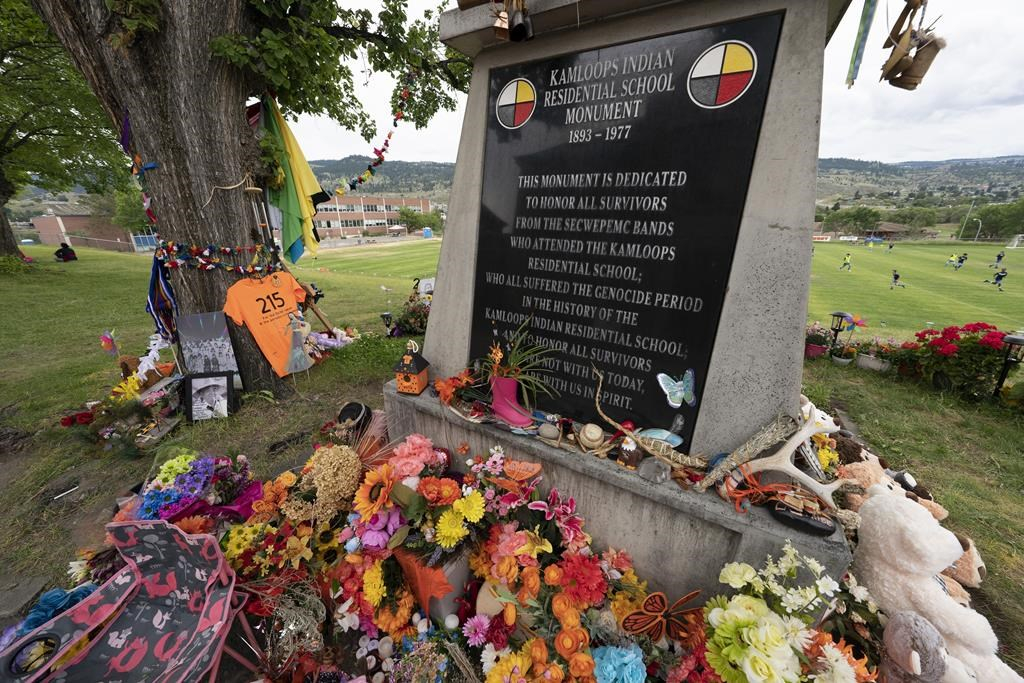 A memorial is seen outside the Residential School in Kamloops, B.C., on June 13, 2021. File photo by The Canadian Press/Jonathan Hayward
Previous story

A leader in Canada's national assembly of Catholic bishops says he hopes an apology for the harms endured at residential schools could mark a turning point in the church's relations with Indigenous Peoples, but some leaders within the community say it remains to be seen whether the expression of remorse will be backed up by meaningful action.

The Canadian Conference of Catholic Bishops apologized "unequivocally" Friday for the abuses committed by members of the church community who were involved in running residential schools.

Vice-president Bishop William McGrattan acknowledged that the church has a history of making apologies, but said the one-page statement ratified at a full meeting of the bishops last week reaffirms their commitment to the process of reconciliation and outlines "tangible" steps to be expanded on in the future.

"First Nations people have continually called for greater responsibility and accountability of the church," the Calgary bishop said Sunday. "This is a long journey. And it's one that hopefully we can begin again and renew that relationship."

The bishops have pledged to provide records that could help "memorialize" the students believed to be buried in unmarked graves, raise money for initiatives endorsed by Indigenous leaders, and work on getting the Pope to visit Canada.

Assembly of First Nations National Chief RoseAnne Archibald said she welcomed the bishops' full-throated apology, but noted that their promises fall short of the actions the Indigenous community has called for.

"The words of the apology speak to a commitment by the (Catholic) church to the healing path forward with First Nations and Indigenous peoples," Archibald said in a statement Friday. "Only time will tell if concrete actions will follow the words of contrition by the Bishops."

Archibald said she was disappointed that the bishops didn't pass a resolution to formally invite the Pope to Canada to apologize to residential school survivors, their families and communities — one of the calls to action laid out in the Truth and Reconciliation Commission's 2015 report.

McGrattan suggested an apology may not be far off as Indigenous leaders prepare to travel to the Vatican in December to meet with Pope Francis.

"We anticipate that this delegation going to Rome will be the first step," he said. "It's important, I think, to make sure that those steps are done properly."

Archibald also expressed reservations about the bishops' fundraising effort, noting that the church raised less than one-sixth of a $25-million fund promised for reconciliation and healing as part of the Indian Residential Schools Settlement Agreement more than a decade ago.

McGrattan noted that the Canadian Conference of Catholic Bishops was not a party to that settlement, but said the "somewhat disappointing" fundraising outcome underscores the need for a new approach.

Last spring's discoveries of hundreds of unmarked graves on the sites of former residential schools prompted calls for the church to release records that could help identify the children who were believed to be buried, often without their families ever being told of their deaths.

The church has also faced heavy criticism for neglecting to provide all documents on the schools requested by the Truth and Reconciliation Commission.

McGrattan said many parishes near the burial sites plan to share sacramental records — such as registers of births, baptisms and deaths — to help families lay their loved ones to rest.

But he maintained that the church must exercise discretion when it comes to the disclosure of such documents.

"We just don't want to, in a sense, allow for information sometimes just to be given generally, where loved ones need to be the first ones to receive that and to understand the history," he said. "We are willing to work with them, but to just release information in a way that might harm them is also something that we don't want to do."

More than 150,000 Indigenous children were forced to attend residential schools for more than a century when the Canadian government enacted a policy to assimilate Indigenous children, tearing them from their culture, families and languages.

The Catholic and Anglican churches ran most of the schools where children were subjected to rampant emotional, physical and sexual abuse.