Oil will begin to flow Friday through Enbridge's Line 3 pipeline 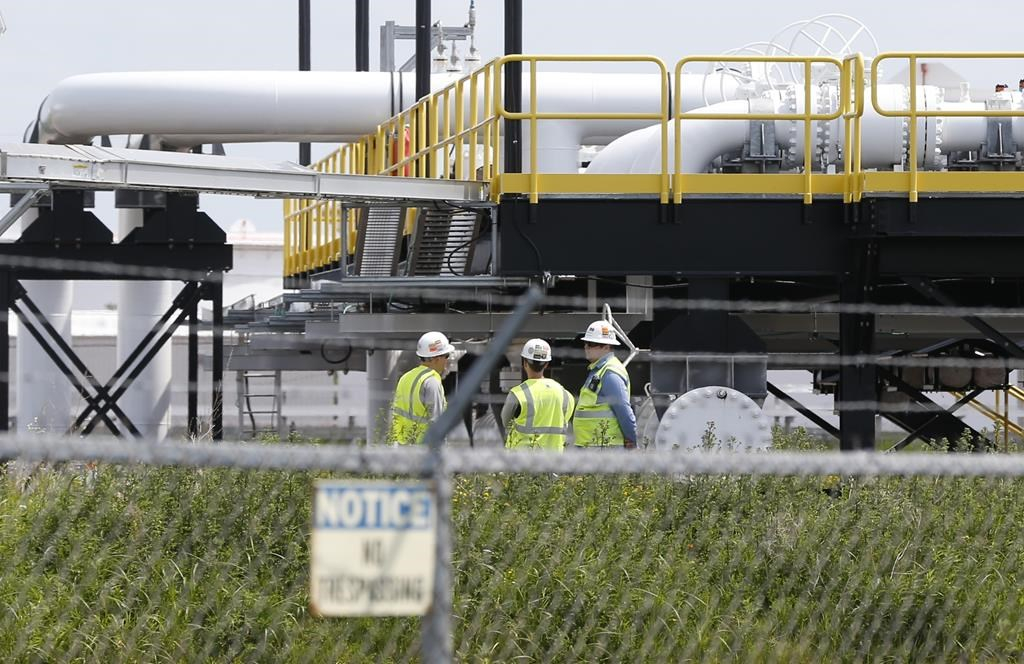 In this June 29, 2018 file photo, workers are visible at the Superior terminal of Enbridge Energy in Superior, Wis. Photo by: The Canadian Press/AP/Jim Mone
Previous story
Next story

MINNEAPOLIS (AP) — Enbridge announced Wednesday that construction on the upgrade of its Line 3 crude oil pipeline across Minnesota is “substantially complete” and that the company will start filling it with oil Friday.

The Canadian-based company's president and CEO, Al Monaco, said in a statement that the pipeline “will soon deliver the low-cost and reliable energy that people depend on every day.”

The project was completed despite stiff opposition from tribes, environmentalists and others who argued that the 1,097 mile (1,765-kilometer) pipeline — including the 337-mile (542-kilometer) segment across Minnesota — would violate treaty rights, worsen climate change and risk spills in waters where Native Americans harvest wild rice. They note it would carry oil from Alberta's tar sands, a heavier crude that consumes more energy and generates more carbon dioxide in the refining process than lighter oil, making it an even bigger contributor to climate change.

The main remaining tasks are cleanup and restoration along the route, said Leo Golden, an Enbridge vice president in charge of the project. Some parts have already been completely restored with crops and native grasses growing on them, he said. But construction mats still need to be removed from wetlands and other cleanup work will continue through next summer.

“We're not done restoring until we go to the landowners and we walk the land with them and they say ‘Yes, you’re done' and sign off," Golden said.

Golden said they don't expect to get the final signoffs from landowners along the route until next summer.

Groups opposed to the project were preparing a statement. More than 900 people have been arrested or ticketed at protests along the route since construction began in December.

Enbridge said the project was necessary to replace a deteriorating pipeline built in the 1960s, which could carry only half its original volume of oil, and to ensure the reliable delivery of crude to U.S. refineries. Enbridge expects to start running the pipeline at its full capacity of 760,000 barrels per day in mid-October.

Opponents have challenged the pipeline's permits in court to no avail so far. They've also unsuccessfully sought to persuade President Joe Biden, who canceled a key permit for the Keystone XL pipeline soon after taking office, to intervene.

The opposition's legal options going forward are fading. A challenge is still pending in federal court to a permit granted by the U.S. Army Corps of Engineers, but that case didn't block construction. Opponents can still ask the state Supreme Court to review a clean water certification granted by the Minnesota Pollution Control Agency.

Also, a novel “rights of nature” lawsuit is pending in the White Earth Ojibwe tribal court. It names Manoomin — the Ojibwe word for wild rice — as one of the plaintiffs. The Minnesota Department of Natural Resources has asked a federal appeals court to block that case.

Time to boost the

Time to boost the electrification of transportation, which is the primary destination of this oil.